$3.9B Deal Reached for JFK Terminal 6

On Tuesday (Aug. 3), the Port Authority of New York and New Jersey announced that it had reached an agreement with JFK Millennium Partners (including JetBlue Airways) to build the new international Terminal 6 at JFK International Airport.

The project was initially supposed to break ground in 2020, but investment came into question after the COVID-19 pandemic. The restructured deal is reportedly a major step forward for the JFK project.

Subject to Board approval, the Port Authority will finalize and enter into a lease agreement with JMP for the construction of the $3.9 billion, 1.2 million-square-foot terminal. The full $3.9 billion expense of building the terminal will be privately financed by the JFK Millennium Partners consortium.

The terminal is slated to be built on the sites of the former Terminal 6, which was demolished in 2011, and the aging Terminal 7, which will be torn down after British Airways relocates to Terminal 8. 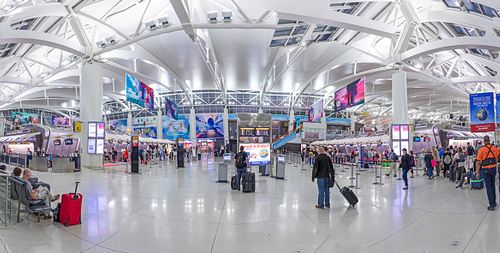 travelviews / Getty Images
On Tuesday (Aug. 3), the Port Authority of New York and New Jersey announced that it had reached an agreement with JFK Millennium Partners (including JetBlue Airways) to build the new international Terminal 6 at JFK International Airport.

The new terminal will connect to Terminal 5 and be equipped with capacity for 10 new gates, as well as check-in halls, arrival spaces and more than 100,000 square feet of commercial dining and retail amenities, lounges, and recreational spaces.

Construction of the new terminal is scheduled to begin in mid-2022 and the first new gates are scheduled to open in 2025.

According to the governor’s office, the development of Terminal 6 is expected to result in over 4,000 direct jobs and direct payroll wages of $1.9 billion. The total economic activity impact from the project, including indirect effects such as the local market participation of employees of suppliers, amounts to nearly $2.8 billion in total wages and $6.3 billion in total economic activity.

“This historic investment to modernize JFK Airport and the surrounding transportation network will not only ease travel through this major hub, but it will ensure JFK joins the ranks as one of the finest airports in the world,” said Cuomo at the time.

In February, Cuomo announced that the Port Authority of New York and New Jersey reached an agreement on terms with Delta Air Lines for work on JFK International Air Terminal’s Terminal 4—a $3.8 billion renovation project.

The work is for the expansion and renovation of Terminal 4 originally included the addition of 16 new gates (500,000 square feet), the renovation of existing concourses and roadway upgrades.

Most recently, in May, the Board approved an agreement on key terms for an amended plan for the JFK International Airport. The terms were with Delta Air Lines and JFK to expand Terminal 4 and consolidate Delta operations.

The now $1.5 billion project, which is being financed by private capital, was initially authorized in February 2020 as a $3.8 billion expansion and modernization plan. However, due to the impact of the COVID-19 pandemic, the plan has been reduced by about 60% to highlight key priorities.

Delta currently operates out of both Terminal 4 and Terminal 2, and this expansion aims to allow Delta to offer a seamless travel experience by consolidating all of Delta's JFK operations into Terminal 4.

The project will modernize and expand the existing terminal by about 150,000 square feet and will replace the 11 gates currently used at Terminal 2, which was built in 1962. That terminal will then be demolished.

The expansion and renovation at Terminal 4 is slated to break ground later this year, enabling Delta to consolidate its operations in late 2022, with full project completion in late 2023. A contractor for the project has not been released.