Researchers from Northwestern University have recently been reported to have developed an protection mechanism using a nano-coated sponge-like membrane that can be used to soak up phosphate in waterways.

According to The American Society of Mechanical Engineers, phosphate runoff into U.S. waterways is constant, nagging problem, that is often tied to fertilizer applications. Once in a water source, the substance depletes water of oxygen and feeds algae blooms those foul rivers, streams and lakes.

One of the largest examples of phosphate runoff is that carried from the Mississippi River into the Gulf of Mexico, which over time, has created a large dead zone.

Dubbed PEARL, for Phosphate Elimination and Recovery Lightweight, the porous and flexible sponge-like membrane is made of cellulose and coated with iron-oxide nanostructures that bind to phosphate. By adjusting the pH, researchers have shown not only that they can capture phosphate, but they can also release it.

The nano-coated sponge-like membrane can reportedly selectively sequester up to 99% of phosphate ions from polluted water.

“We wanted to develop science and technology that is business centric or has the potential to be scalable,” explained Vinayak Dravid, the Abraham Harris Professor of Material Science and Engineering, and director of the Soft and Hybrid Nanotechnology Experimental Resource.

Given that the effects of phosphate pollution are also well known in the Great Lakes region, the researchers were prompted to modify the sponge to collect and release phosphates. 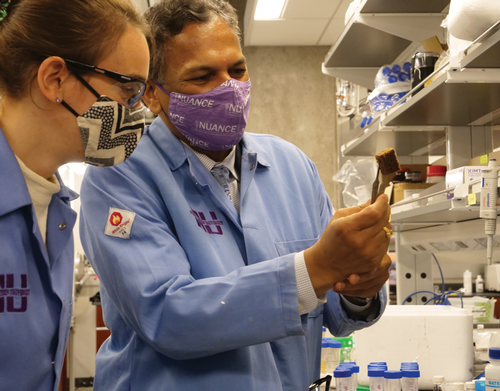 “People often work with precious metals like gold or silver for different remediation and catalytic applications,” said Stephanie Ribet, a PhD student and lead author of the paper describing the work. “We were looking for something more cost-effective and earth abundant, so the iron oxide serves that role.”

Dravid added, “It has a very high affinity for phosphorous in the form of phosphate, sow we have a tiny five percent to 10% of the coating inside the pores of the cellulose. So when you let the water flow through this membrane, with a very low pH, it has the ability to attract phosphate so you create the phosphate coating on this nanoparticle. There’s a very high surface area, a small amount can sequester a very large amount of phosphorous. Then we can take it to a different tank, and with a slight change in pH, the phosphate is released.”

Afterwards, the researchers report that the sponge can be used again. Most remedial measures have centered on simply eliminating phosphate from water sources, such as removing the substance from laundry detergent. But it is a nonrenewable natural resource and has value so the ability to capture and release is key to opening a market for it.

“What is innovative is anchoring the iron oxide onto the cellulose and finding the condition where with low pH you can get the phosphorous and attach it to the nano particle and then with the higher pH you release it. But to be able to use it repeatedly is what we’re looking for. It gives you a sustainability solution,” said Dravid.

In the lab, researchers have demonstrated success on scales from milligrams to kilograms using samples from local water treatment labs. The next step is to scale for a pilot demonstration leading to a viable product.

According to reports, the research was built on earlier work in developing the oleophilic hydrophobic multifunctional sponge that has the same platform but was designed to remove and recover oil from water.

The research has since been published in the Proceedings of the National Academy of Science.

Researchers from Imperial College London and the University of Toronto have announced the development of a nanocoating designed for commercially available sponges to recover oil from water back in May. The coating is noted to work in temperatures as low as 5 C, providing a new sustainable method for collecting oil from industrial wastewater and oil spills in the Arctic and other ultracold waters.

According to Imperial College, if spilled in cold or ultracold waters, oil becomes much more difficult to extract as it becomes viscous, reducing its flow and even begins to crystalize at 38 C with notable sticky edges. Prior to the study, more traditional practices of oil extraction from these particular situations have been noted to be either energy intensive, costly or ineffective for use with micrometer-sized oil droplets.

In other practices, the oil extraction can even be more harmful to the environment, for instance, extractions that involve reheating the oil for collection risks potential dissolving or even evaporation into the air.

Made up of polyester polyurethane, the sponge is then coated with nanosilicon and capped with paraffin-like, 18-carbon ligands. The surface engineered sponge result is capable of conferring wax-wetting properties.

To test the extraction tool, the researchers used the sponge in oil concentrations of about 10,000 ppm. They found that in freshwater, at 5 C, 20 C, and 40 C, the sponges were able to remove oil droplets with 90–99% efficacy within 180 minutes.

Throughout the testing, researchers found that the sponge was able to have a maximum uptake of 993–1,094 mg/g across all temperatures. This was due in-part to the sponge’s ability to be rinsed with a non-toxic solvent. The rinsing of the sponge, also known as wax-wetting, displaces the sticky oil droplets and allows them to be collected, enabling both the sponge and the oil to be reused.

After the optimum wax-wetting characteristics had been established, chemists from both colleges synthesized the nanocoating which made it functional and ready to use on a larger scale.

Besides working as a sorbents in reclaiming oil from wastewater, researchers believe that the method could be further designed to separate other viscous organic pollutants from industrial effluents such as petrochemicals, lubricants, and paints. Other potential modifications could help to kill bacteria in river water for use in resource-limited communities.

The research findings have since been published in Science Advances.