According to a press release issued by California-based Pacific Gas and Electric Company (PG&E), the utility plans to expand the undergrounding of electric distribution power lines in High Fire Threat Districts (HFTD) to further harden its system and help prevent wildfires.

The multi-year effort plans to underground approximately 10,000 miles of power lines and is projected to cost $15 billion, but could reach a price tag of up to $30 billion, based on process costs.

“We want what all of our customers want: a safe and resilient energy system. We have taken a stand that catastrophic wildfires shall stop,” said PG&E Corporation CEO Patti Poppe. “We will partner with the best and the brightest to bring that stand to life. We will demand excellence of ourselves. We will gladly partner with policymakers and state and local leaders to map a path we can all believe in.

PG&E's commitment represents the largest effort in the nation to underground power lines as a wildfire risk reduction measure. Today, the company is reported to maintain more than 25,000 miles of overhead distribution power lines in the highest fire-threat areas (Tiers 2, 3 and Zone 1)—which is more than 30% of its total distribution overhead system.

In addition to reducing associated wildfire risks, the undergrounding is also slated to benefit customers in that it will lessen the need for Public Safety Power Shutoffs—often a last resort during dry, windy conditions to reduce the risk of vegetation contacts live power lines and sparking a wildfire.

As reported in The Washington Post, in addition to preventing wildfires, the proposed undergrounding also makes sense for the company financially, in that PG&E recently reached a $13.5 billion settlement with California wildfire victims in 2019, which included claims from the 2018 Camp Fire that had resulted in the death of 85 people and the destruction of 14,000 homes. 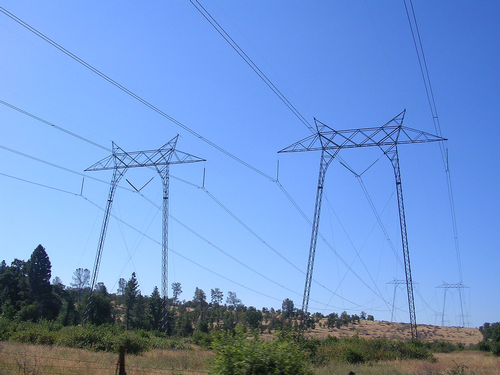 Cheers, CC-BY-SA-3.0-migrated-with-disclaimers, via Wikimedia Commons
According to a press release issued by California-based Pacific Gas and Electric Company (PG&E), the utility plans to expand the undergrounding of electric distribution power lines in High Fire Threat Districts (HFTD) to further harden its system and help prevent wildfires.

Following these devastating instances, PG&E began evaluating the possibility of buying the power lines underground. To do so, the company launched a slew of demonstration projects as part of its Community Wildfire Safety Program. The projects included:

It is through these efforts that PG&E reports it have been able to refine construction and cost requirements associated with targeted undergrounding, enabling the acceleration and expansion of underground projects.

Despite these efforts, more recently, PG&E told the state utilities commission that its equipment may have also started the Dixie Fire in Butte County, California. As of last Wednesday (July 21), the fire had reportedly burned more than 91,000 acres since igniting on July 13.

Starting at the site of the North Compex Fire, crews were recently reported to have buried up to 1,250 feet of power lines in a single day. However, according to PG&E Vice President for the North Valley and Sierra region, Joe Wilson, that number is hailed as a “record day.”

Even if crews were able to maintain that rate without any days off, in total, they would have only buried some 80 miles within in a year. In other areas, PG&E has reportedly been burying about 70 miles annually.

Regardless, PG&E Chief Operating Officer, Adam Wright, said he hopes that crews will eventually be able to bury 1,000 miles of lines underground each year.

In addition to burying the power lines, Poppe has also announced a $1.4 billion plan to remove more than 300,000 trees and trimming another 1.1 million, since the utility is “not making enough progress.” The trees are only a fraction of the 8 million that are reportedly within striking distance of the company’s power lines.

PG&E notes that it plans to engage customers and stakeholders as it develops a plan and reviews potential additional undergrounding sites. Local municipality planning and safety considerations, among other factors, will be considered as engineering an underground electric system requires designing the system, around existing water, natural gas and drainage systems.