$2.1B AirTrain Approved for LaGuardia Project

A large piece of the puzzle has been approved by the Federal Aviation Administration for the LaGuardia Airport project—a $2 billion AirTrain.

Preliminary work could begin as soon as the end of summer, according to the Port Authority of New York and New Jersey. Gov. Andrew Cuomo’s larger vision for the airport was hinging on this decision, as the facility is in the midst of an $8 billion ground-up renovation.

“The LaGuardia AirTrain will provide a sustainable and reliable travel option to LaGuardia Airport. It will remove millions of vehicles from congested highways and local roads each year. The transformative AirTrain project will help drive the region’s economic recovery by creating 3,000 union construction jobs and more than $500 million in business contracting opportunities for minority and women-owned businesses and local, Queens-based businesses,” said Port Authority Executive Director Rick Cotton.

“It also includes a historic investment of $50 million in the Malcolm X Promenade along Flushing Bay and other neighborhood parks. Additionally, the LaGuardia AirTrain includes a robust package of other community benefits, from investments in workforce development programs for local residents and strong local hiring requirements, to STEM programming and college scholarships for local students.” 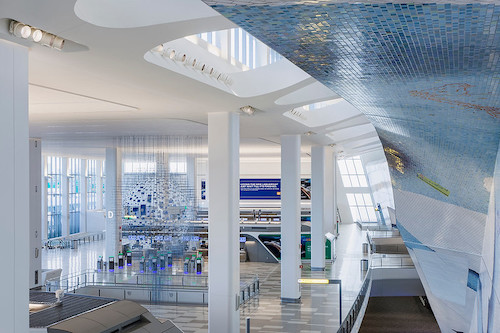 Office of Gov. Andrew Cuomo
A large piece of the puzzle has been approved by the Federal Aviation Administration for the LaGuardia Airport project—a $2 billion AirTrain.

The federal approval did come against the protests of some environmental groups as well as New York Rep. Alexandria Ocasio-Cortez, who questioned why the other options for transportation (such as a subway route or ferries) weren’t fully investigated.

She argued that the line will disrupt some of the city’s most vulnerable communities.

In response, Steve Dickson, administrator of the FAA, said that it was found to be the least disruptive to the surrounding community and pointed out that the point of the project is to serve the airport, not the community: “It is not a regional transit project,” he wrote.

However, an aspect that was not approved was how the AirTrain would be funded. Reportedly, officials hope to use fees collected from passengers at the airports it serves to help pay for it, but the FAA has not approved that idea.

The Terminal B Arrivals and Departures Hall opened in June and serves American Airlines, United Airlines, Southwest Airlines and Air Canada. The 850,000-square-foot, four-story terminal is also home to 17 concessions of New York-based businesses as well as four permanent public at installations commissioned by the Public Art Fund.

Last fall, Terminal B was nearly complete, and an update on other aspects of the project included: