A startup company in India has designed a roofing alternative with the goal of keeping homes cooler: modular roofing panels that are made from paper and wood waste.

ReMaterials CEO Hasit Ganatra recently said in an interview that he started the company after realizing that the common corrugated metal sheet roofs and cement roofs weren’t cutting it for the heat waves felt in the region.

“I kept seeing these roofs which needed change,” Ganatra, said in the interview. “When I started the company, I traveled across four states of India, rural areas, urban slums, and spoke to 600 families. We would go to villages and slums and see people spending time outside of their house on summer afternoons, and they’d say, ‘This house is like an oven. We can’t stay inside.’”

The Modroof design utilizes cardboard (manufacturing and agriculture) waste and what the company calls natural binders that might a lightweight option that helps insulate the home. A waterproof coating is also added to the material, which has a metal structure and an air gap. 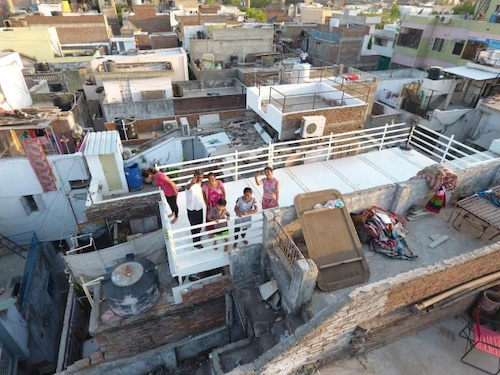 ReMaterials
A startup company in India has designed a roofing alternative with the goal of keeping homes cooler: modular roofing panels that are made from paper and wood waste.

Company testing shows that the roof can make an 18-degree F difference inside the home.

ReMaterials also claims that the combination of materials also helps combat the heavy rain season as traditional metal roofs suffer from corrosion while concrete roofs crack. And, in terms of price, the Modroof falls somewhere in between the two and are easier to install, according to the company.

The startup has also partnered with various companies to offer microloans to help with the costs.

Roofing and exterior wall alternatives to mitigate heat are nothing new, though innovations keep rising in the industry. Most recently, the Lawrence Berkeley National Laboratory partnered with the U.S. Green Building Council for a new pilot credit for the installation of cool exterior walls in new homes, schools and commercial buildings for the purpose of mitigating urban heat islands.

Berkeley notes that with the pilot credit, this is a test integration for cool walls into the USGBC’s LEED ratings for buildings. The credit was written by Berkeley Lab scientist Ronnen Levinson based on peer-reviewed research by the University of South California and Berkeley Lab. That study found that reflective walls could lower urban air temperature much like reflective “cool roofs.”

Berkeley noted that idea is to surface exterior walls with a solar-reflective paint or cladding. Reflecting sunlight out of the city reduces urban heat. To qualify for the LEED pilot credit, buildings must cover 75% of a building’s exterior with a cool wall material that reflects at least 60% of sunlight, among other specifications.

Prior to that, in July 2019, Berkeley Lab researchers found that in many climates in the United States, the use of “cool” exterior walls can save building owners as much or more energy than cool roofs.

“Cool walls provide energy cost savings and emission reductions across California and the southern half of the United States,” said Levinson, who co-authored the study, published in the journal Energy & Buildings. “In these climates, cool walls can save as much or more energy than the same size cool roof.”

The report analyzed more than 100,000 building simulations and modeled several different types and ages of homes, retail stores and office buildings in cities across California and the rest of the U.S.

“Repainting the exterior walls of pre-1980 buildings—whether homes or office buildings or stores—with cool paint offers the greatest benefit because they have the least insulation,” Levinson said. “And that’s not difficult to do. There are many light-colored cool paints in local home supply stores.”

In warm U.S. cities such as Miami, Florida, and Albuquerque, New Mexico, researchers found that cool walls could lead to annual heating, ventilation and air conditioning energy cost savings up to 11% for stand-alone retail stores, 8.3% for single-family homes and 4.6% for medium-sized office buildings. And for single-family homes across all California climates, the study found potential energy cost savings could range from 4–27%.

The study was supported by the Electric Performance Investment Charge program of the California Energy Commission and by the U.S. Department of Energy’s Office of Energy Efficiency and Renewable Energy.

A month later, Berkeley issued another study, this time focusing back on cool roofs—more specifically California’s use of cool roofs.

“The researchers predict that heat waves are likely to become two to 10 times more frequent across the state by mid-century,” according to Berkeley’s press release. “But if cool roofs were adopted throughout California’s most populous areas—the San Francisco Bay Area, Los Angeles, San Diego and Sacramento—by 2050 these reflective roofs could bring down heat wave exposures (defined as each time a person experiences a heat wave) by 35 million each year, compared to an estimated 80 million heat wave cases in 2050 with no increase in cool roof adoption.”