Announced at the end of June, the U.S. Environmental Protection Agency reported that it would be entering a Federal Facility Compliance Agreement with the U.S. Navy to complete major upgrades at the Joint Base Pearl Harbor-Hickam Wastewater Treatment Plant.

“The Navy’s lack of proper operation and maintenance of the treatment plant has led to excessive toxic pollution discharges into Pearl Harbor and unacceptable worker safety risks,” said Amy Miller, EPA Pacific Southwest Regional Director of Enforcement and Compliance Assurance. “EPA is pleased with the Navy’s commitment to improving wastewater infrastructure and protection of coastal waters.”

Owned and operated by the U.S. Navy’s Naval Facilities Engineering Command (NAVFAC), the Joint Base Pearl Harbor-Hickam Wastewater Treatment Plant is located in the Ewa district of Oahu, Hawaii, and services up to 40,000 people. The facility spans 11.61 acres and accepts both domestic and industrial wastewater.

Using its combined clarifiers, activated sludge process and effluent filtration for approximately 6.5 million gallons of wastewater per day, in addition to other main components, the plant provides advanced secondary treatment. 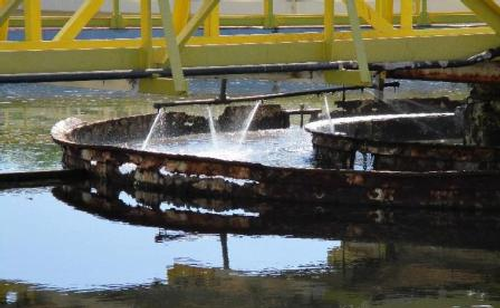 A deep ocean outfall was constructed between February 2002 and December 2003. Spanning 2.4 miles long and extending almost 1.5 miles from shore, the outfall reaches ocean depths of 150 feet. The outfall was brought online in January 2005, and serves to reduce pollutant discharge into the Pearl Harbor estuary, improve the harbor’s water quality and takes effluent into deeper waters where it will be disbursed with the help of ocean currents.

In October 2019, the U.S. Navy found structural defects from an excessively corroded and thinned concrete floor in the outflow pump station. The station is a critical component of the Plant that requires regular maintenance. Failure of the pump station could result in uncontrolled discharges of effluent and could damage treatment systems, as well as compromise worker safety.

In January 2020, NAVFAC reported a wastewater spill at the plant. Called out at 6:30 a.m. that morning, crews found that wastewater had overflowed from three manholes in front of a lift station and was flowing into an adjacent storm drain that empties into the harbor.

According to reports, the 1,700-gallon spill was mostly unrecoverable. The land-area near the manholes was cleaned up and sanitized by 7:40 a.m. Crews later discovered that the overflow was the result of an electrical malfunction at a nearby lift station. As a result of the spill, the Navy made all necessary notifications to the State Department of Health as required.

A National Pollutant Discharge Elimination System (NPDES) permit is required by the Hawaii State Department of Health to operate the WWTP. The current permit took effect on June 1, 2020, and will expire on May 31, 2025.

In conducting various investigations, the EPA has recently found that the wastewater plant is exceeding its discharge limits under the Clean Water Act for cadmium, zinc, oil and grease, pH, and total effluent toxicity.

In addition to the aforementioned issues at the wastewater facility over the last three years, the EPA also reported that the plant has had numerous operation and maintenance violations, including algae growth, warped and disconnected parts, cracked concrete tanks, and severely corroded equipment.

Under the new agreement, the U.S. Navy is required to replace, repair, or refurbish the plant’s three primary clarifiers, five of the six secondary clarifiers, and the effluent pump station by December 31, 2024. In addition, the U.S. Navy must develop a plan to prevent and respond to potential infrastructure failures at the plant. This work will allow the plant to come into and remain in full compliance with all applicable laws and regulations related to the discharge of treated wastewater into the ocean.

This settlement furthers EPA’s National Compliance Initiative to reduce the number of U.S. facilities that are in significant non-compliance, and to improve surface water quality by ensuring dischargers comply with permit requirements.

According to the initiative, there are approximately 46,000 major and minor individually NPDES-permitted facilities in the country. During fiscal year 2018, approximately 20.3% of the facilities were in significant noncompliance (SNC) with their permits.

Violations ranged from significant exceedances of effluent limits, which can cause harm to human health and the environment, to failure to submit reports, which can mask serious deficiencies.

The objective of the new initiative is to improve surface water quality and reduce potential impacts on drinking water supplies by assuring that all NPDES permittees are complying with their permits. In addition, the NCI aims to reduce the FY 2018 national quarterly SNC baseline rate of 20.3% by half by the end of 2022, while assuring that the worst SNC violators are timely and appropriately addressed.