Last week, the American Society of Civil Engineers released a new manual of practice, reporting that the document will give civil engineers the tools to design, plan and build more resiliently, more consistently.

The new manual is sponsored by the ASCE Infrastructure Resilience Division and was edited by Bilal M. Ayyub, Ph.D., P.E., Dist.M.ASCE. Ayyub is also noted to serve as the director of the Center for Technology and Systems Management of the Department of Civil and Environmental Engineering at the University of Maryland.

“We designed this manual of practice to help foster consistent and coordinated infrastructure systems,” Ayyub said. “The most important thing we can achieve is the building of resilient communities.” 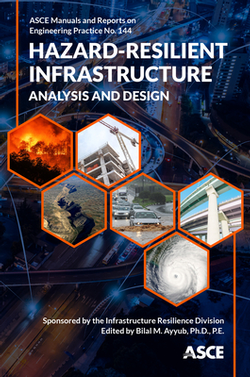 Having previously edited Climate-Resilient Infrastructure: Adaptive Design and Risk Management back in 2018, Ayyub foresees both manuals as being part of a continuum of sorts, with more MOPs potentially in the works.

In the latest publication, Ayyub reports that focus on consistency is a new aspect and is more greatly emphasized, at least when compared to the last 10 years of the civil engineering industry.

“Consistency is the major driver,” Ayyub continued. “All of the systems that we are dealing with—whether it’s transportation, water, or power—must be maintained at appropriate levels to achieve community resilience. In the past, I’m not sure consistency received the same amount of attention. Consistency and coordination across sectors, but also across hazards, is essential.”

Having been involved in the industry for many years, Ayyub reports that over the years, he has witnessed the industry increasingly embrace these resilience concepts and that many of the case studies and visuals in the manual of practice derived from the participation of major civil engineering firms.

“I know from our interactions with these companies, they were keenly interested. They think that this is the way of the future,” said Ayyub. “And they are businesses after all, so they see the business side of it. They see there is a need for resilience; there is a demand.”

Back in March, ASCE released its 2021 Infrastructure Report Card, revealing a mediocre, but passing grade for infrastructure in the United States. The ASCE, which issues the report every four years, gave the nation a C- for the condition and performance of its infrastructure, a slight improvement from the 2017 report.

“For the first time in 20 years, our infrastructure GPA is a C-, up from a D+ in 2017. This is good news and an indication we’re headed in the right direction, but a lot of work remains,” wrote the ASCE at the time.

In analyzing the data collected, ASCE noted on three trends experienced across all 17 categories:

In expanding on the nation’s bridges specifically, of the more than 617,000, 7.5% are considered structurally deficient and nearly 42% are at least 50 years old. The ASCE also estimates that the nation’s backlog of bridge repair requires $125 billion. Additional estimates revealed that spending on bridge rehabilitation would need to increase from the current $14.4 billion annually to $22.7 billion annually, or by 58%, if conditions are to improve.

Rail is the high point of the report, boasting a B grade, also unchanged from 2017. In 2018, the nation reportedly spent $24.9 billion on rail projects, averaging over $260,000 per mile. In addition to those numbers, Amtrak was reported to have spent $713 million between 2017-19 on state-of-good-repair projects.

Drinking water’s grade improved slightly from a D to a C- as well, noting that while America’s drinking water remains largely of high quality, the systems are aging and underfunded. The report also points out that by 2019, utilities were replacing between 1%-4.8% of pipelines per year on average. However, it was also estimated that more than 12,000 miles of water pipes were planned to be replaced by drinking water utilities across the country in 2020.

Wastewater infrastructure was another sector to flatline, keeping the D+ rating it received in 2017. Estimates indicate that utilities spent over $3 billion in 2019, or more than $18 per wastewater customer to replace the almost 4,700 miles of pipeline nationwide.