To fulfill President Joe Biden’s goal of ramping up the nation’s infrastructure, Christian C. Steputat, a Ph.D. candidate in the College of Engineering at the University of Miami, was brought on to assist in the replacement of the Ibis Bridge in the small Broward County suburb of Lighthouse Point, Florida.

Under the American Jobs Plan, 20,000 miles of highways, roads and main streets are slated to be upgraded; 10 of the most economically significant bridges in the U.S. in need of reconstruction will be mended; and 10,000 smaller bridges have plans to be repaired.

About the Ibis Bridge

Crossing the Ibis Waterway in Broward County, Florida, the Ibis Bridge—also known as the NE 23rd Avenue Bridge—was originally constructed in 1950 and is currently owned by the City or Municipality Highway Agency.

The structure has been touted as the city’s main artery, seeing roughly 4,100 travelers per day.

Built using concrete and a tee beam, the bridge has a 128-foot-long span. During the structure’s latest available inspection from April 2017, officials reported that its condition was poor, that its substructure condition was poor and that the superstructure was in fair condition. The deck, which is made up of concrete cast-in-place with a bituminous wearing surface, was noted to be in good condition. 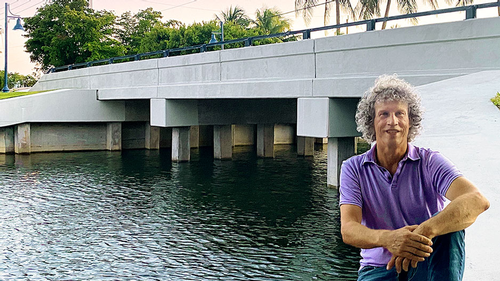 University of Miami
To fulfill President Joe Biden’s goal of ramping up the nation’s infrastructure, Christian C. Steputat, a Ph.D. candidate in the College of Engineering at the University of Miami, was brought on to assist in the replacement of the Ibis Bridge in the small Broward County suburb of Lighthouse Point, Florida.

Although the structural appraisal met minimum tolerable limits to be left in place as is, the scour condition was unable to be inspected as the bridge was reported to have an “unknown” foundation.

At the time of the inspection, officials recommended a replacement of the bridge or other structure because of substandard load carrying capacity or substantial bridge roadway geometry. The project was estimated to cost $3.2 million.

In 2019, however, the Florida Department of Transportation released project information regarding the replacement of the bridge in addition to some street work from NE 23rd Avenue from NE 29th Street to NE 30th Street. At the time, FDOT expected construction costs to be $2.4 million, with work finishing up sometime in late 2020.

The project was originally slated to begin at the end of August, but was moved to the first week of October after Anzac requested a 33-day extension to procure specialized reinforcement material that extends the life of the bridge and requires less maintenance over time. That date was later suspended, however, as contractors still needed to know the exact location of a water main under the east side of the bridge as to avoid rupture when driving piles. At the time, a sewer force main and a water main on the west side of the bridge were already located.

When new information was release by FDOT indicating a November start date, the Department noted that Anzac had already removed the bridge deck of the existing bridge. Pile driving activities were tentatively expected to begin at the beginning of February and end in late spring 2020.

Having worked on design and construction projects all over the world, from a high-rise building in Beijing to a 540-foot-tall replica of the Eiffel Tower in Las Vegas to the guitar-shaped Seminole Hard Rock Hotel and Casino in Hollywood, Florida, member of the American Society of Civil Engineers Christian C. Steputat recently took his attention to the Ibis Bridge.

For the project and as part of his doctoral research, Steputat documented the use of, and the partial prestressing process applied to, the special rebars used in the Ibis Bridge’s construction. Those rebars were made of glass fiber reinforced polymers (GFRP), which can be twice as strong as steel, yet four times as light.

“I look at our planet in terms of sustainability and resilience,” said Steputat. “What can we do to make everything better and optimize our systems by using and reusing our available resources? That’s the future of our industry.”

By replacing the structure’s span with the GRFP, the bridge is now expected to last a century. How? Well, according to Steputat, GFRP rebars don’t corrode.

“In older bridges made with steel rebars, boats, jet skis, and other watercraft that travel under them generate sea spray, which can eventually cause rust staining and corrosion,” Steputat explained that with GFRP, “You can basically stick them in saltwater, and they’ll never rust.”

In addition to utilizing the GFRP rebars, Steputat also installed 10 wireless sensors in the bridge’s core and deck to monitor the strength, temperature, and humidity of the concrete, accessing the data via his smartphone so that he can know how the concrete in the middle is behaving compared to the outer surfaces that get more air circulation and cool the quickest.

“Most bridges are still built with the old-fashioned steel rebars,” he concluded. “Using GFRP technology can decrease maintenance costs, and it comes with longer service life. It’s starting to gain a foothold. Not as quickly as we’d like, so we have an obligation to educate not just the public but the construction industry at large.”