According to Covestro, the jury recognized the company´s polyurethane infusion resins for the efficient production of wind rotor blades and coatings for offshore wind turbines.

At the awards ceremony, Dirk Soontjens, External Representative for Covestro in the Polyurethanes Wind Segment was quoted saying, “Covestro takes the award as an honor but also as a responsibility to deliver on its Circular Economy vision. Enabling growth for the global wind industry is one of the company’s major goals.

“The productivity and good mechanical properties of the resin system also provide the opportunity to design longer and more durable blades to achieve higher annual energy production and lower energy costs, while removing roadblocks that the industry faces.” 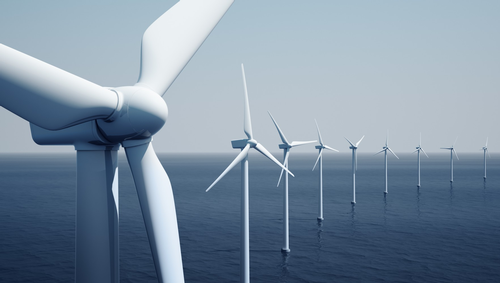 Covestro
Global manufacturer of material solutions Covestro (Pittsburgh) recently announced that it was the recipient of the JEC Innovation Award 2021 in the "Sustainability" category.

For the award, Covestro’s PU was studied for its processing and mechanical properties through prototyping and advanced computer simulations. The company notes that because of the coating’s low viscosity at room temperature and high reactivity at elevated temperatures, the PU enabled rapid infusion and curing.

Compared with epoxy resins, Covestro’s PU was reported to lead to significantly shorter rotor blade production cycles. In addition to the potential for weight savings and their resistance, the PU resins reduce total cost of ownership by increasing energy efficiency and lowering manufacturing and maintenance costs.

Beside the PU resins, several other Covestro coating solutions for offshore wind turbines were included in the case presented for the JEC Innovation Award. Of them were a solvent-free gelcoat, a waterborne 2-component topcoat and a polyaspartic-based leading edge protection coating. The systems were reported to feature excellent adhesion properties on PU composites and were also successfully tested under simulated offshore conditions, revealing that they could facilitate the manufacturing process for rotor blades and improve productivity of wind turbines.

The company reported that the blade, which was made jointly with manufacturer Goldwind and manufacturer LZ Blades, “represents a breakthrough in the application of polyurethane resin in large-scale wind turbine blades and marks the beginning of a new generation of longer and stronger blades for the wind power industry.”

The blade is made entirely of polyurethane infusion resin, and extensive tests are being carried out to evaluate the durability of the blade before small-scale production.

“In the course of our R&D cooperation with Goldwind and LZ Blades, the superior properties of polyurethane resin were further proven through this trial production,” said Irene Li, Head of Application Development Asia Pacific in the Polyurethanes segment at Covestro at the time.

“We believe that Covestro’s solution can greatly contribute to the sustainable development of the wind power industry.”

According to Covestro, tests have shown that the polyurethane resin displays better mechanical properties compared with traditional epoxy resin. As it does not require post-curing and has a lower viscosity and faster infusion speed, the polyurethane resin system could, in theory, improve the efficiency of blade production, thus increasing the competitiveness of blade manufacturers.

In the year prior, the company announced the delivery of its first commercial order of polyurethane raw materials designed for wind blades to China, one of the leading markets for wind power in the world. The blades were produced by wind blade manufacturer Zhuzhou Times New Material Technology, and were recently delivered to wind turbine technology firm Envision.

According to Covestro, the resin was to go toward the production of 18 59.5-meter-long (roughly 195-foot-long) polyurethane blades, as well as for spar caps and shear webs. The company’s wind power team developed a prototype, put in place at a Central China wind farm in 2018, to undergo (and pass) static and fatigue tests.

However, the company first announced its wind turbine blade operations in October 2018, marking the company’s benchmark in its mission to commercialize polyurethane infusion resin for the wind power industry.

Most recently, in April, Covestro announced the successful acquisition of Royal DSM’s Resins & Functional Materials business. The transaction was initially announced in September with a price tag of 1.61 billion euros ($1.9 billion) and has since received the necessary regulatory approvals.

According to Covestro, the agreement adds about 1 billion euros in revenues and an EBITDA of 141 million euros. The deal is a strategic more to expand Covestro’s Coatings, Adhesives, Specialties segment by more than 40% to about 3.4 billion euros.

According to the company, the acquisition will add a complete range of water-based polyacrylate resins and will expand its technology portfolio to include water-based hybrid technologies, powder coating resins as well as radiation curing resins.

RFM includes brands such as Niaga, as well as additive manufacturing, and an advanced solar coatings business.

Covestro also notes that both businesses are committed to Environment, Social, Governance goals and have a complementary research pipeline, especially in the area of sustainable high-performance raw materials for the coatings industry.