At the start of the month, Nevada Gov. Steve Sisolak announced plans to sign a bill that would accelerate the construction of a $2 billion, 525 Kilovolt Greenlink transmission network.

While the recently passed legislation will open access to remote renewable energy resource areas and connect 585 miles of the state’s eastern, western and southern regions, it also requires a $100 million investment in electric vehicle charging stations to help the state reach a 100% clean energy goal by 2050.

In accelerating the grid expansion plan, which gained final state Assembly and Senate approval at the end of May, Nevada’s investor-owned utility NV Energy is required to include completion of both phases of the transmission project by no later than Dec. 31, 2028—roughly three years ahead of schedule.

As part of the legislation, the Public Utilities Commission of Nevada is also requiring that every transmission provider in the state join a regional transmission organization by Jan. 1, 2030. These measures arrive in wake of the state’s goals to have clean energy to make up 21% of its power delivery this year, with plans to steadily increase to 50% by 2030. Utilities will also be working to reduce carbon dioxide emissions 80% within the same decade-long timeline. 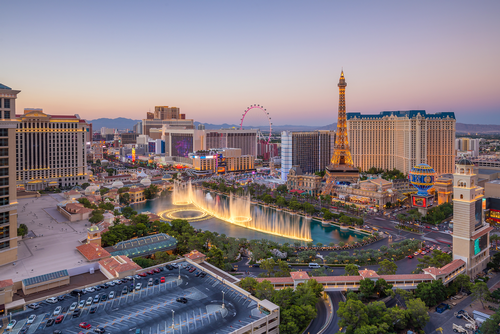 f11photo / Getty Images
At the start of the month, Nevada Gov. Steve Sisolak announced plans to sign a bill that would accelerate the construction of a $2 billion, 525 Kilovolt Greenlink transmission network.

“It is critical that Nevada move to incentivize and approve infrastructure projects like electric-vehicle charging infrastructure buildouts that will put our members back to work and infuse the economy with hundreds of millions of dollars worth of investment ... while simultaneously helping the state meet its renewable energy and carbon reduction goals,” officials from three state electrical worker union locals said in a statement.

According to Sisolak, “Clean energy is intrinsically linked to Nevada’s job recovery and economic opportunities.” In creating the push for the early completion of the Greenlink system, not only will the state see 555 miles of new 345-kV transmission, but the project is also slated to open the state to $10 billion in private investment in renewable energy.

This investment is achieved by connecting to Nevada’s renewable energy zone, which contains about 5,000 MW of underdeveloped resources that could not be developed without added transmission infrastructure. NV Energy reports that includes geothermal and wind resources in northern Nevada and solar farms in southern Nevada.

The project also builds a foundation for the state to transfer energy between Nevada and the developing Western Grid. By 2031, 1,000 MW of base load generation is planned for retirement in northern Nevada.

Back in March, a bill was proposed in Massachusetts that would make the state the latest in to require solar roofs on new residential and commercial buildings. The Solar Neighborhoods Act was reportedly filed at the beginning of the month, with a companion bill filed in the Senate.

In the last session, the Joint Committee on Telecommunications, Utilities, and Energy was favorable to the legislation, but has yet to advance it to a vote on the floor of either chamber.

While Boston has its own requirements, the Massachusetts bill is reportedly modeled after regulations in California— at the end of 2018, California’s Building Standards Commission gave the final approval for codes that mandate the requirement for solar panels on new homes making it the first state to have such a rule. Those rules went into effect last year.

Also in 2018, Denver passed its Green Roof Initiative, which not only requires new, large buildings to be constructed with green roofs, but also requires buildings of a certain size to install a green roof when the current one is up for replacement.

In April 2019, New York City council approved a package of bills and resolutions—known as the Climate Mobilization Act—intended for radical energy efficient improvements. The act requires that all new residential and commercial buildings in the city have green roofs made up of either plants, solar panels or small wind turbines—or a combination of all three.

Most recently, while states and cities have been taking steps towards renewable energy practices, Congress finally started to make the shift from ongoing COVID-19 pandemic issues to what could be done about the nation’s infrastructure after a year of postponed and canceled projects.

The following month, President Joe Biden released the “American Jobs Plan,” a $2 trillion spending proposal that aims to invest in the nation by creating millions of good jobs, rebuilding the country’s infrastructure, and positioning the United States to out-compete China.

Looking at specific investments, the plan allots $621 billion to rebuild the nation’s infrastructure; $689 billion for buildings and utilities; and $500 billion for worker training, research and development and domestic manufacturing initiatives. To further break things down on the transportation front, the proposal includes:

Other notable initiatives for buildings and utilities include:

In the same month, Biden announced that the White House and leaders of the Administration had developed a set of actions aimed at catalyzing offshore wind energy. The reported actions also plan to strengthen the domestic supply chain and create good-paying, union jobs.

Outlined in the jumpstart plan, the U.S. Department of Interior, Department of Energy and Department of Commerce have all announced a shared goal to deploy 30 gigawatts of offshore wind in America by 2030, while protecting biodiversity and promoting ocean co-use. The plan involves new federal ocean tract leasing later this year or by early 2022.

According to the President’s Fact Sheet, if this target is met it will “trigger more than $12 billion per year in capital investment in projects on both U.S. coasts, create tens of thousands of good-paying, union jobs, with more than 44,000 workers employed in offshore wind by 2030 and nearly 33,000 additional jobs in communities supported by offshore wind activity.”

In tackling the transition to clean energy and creating these good-paying, union jobs, the Interior Department’s Bureau of Ocean Energy Management has announced a new priority Wind Energy Area in the New York Bight—an area of shallow waters between Long Island and the New Jersey coast—which a recent study from Wood Mackenzie shows can support up to 25,000 development and construction jobs from 2022 to 2030, as well as an additional 7,000 jobs in communities supported by this development.