Last week, southern Nevada’s Lake Mead hit historic lows, with officials reporting that the United States’ largest reservoir by volume was at an all-time low of just 1,071.44 feet—or roughly 36% of its capacity.

Officials add that while the reservoir will be at its lowest since the 1930s when the Hoover Dam was constructed, they only expect the levels to continually get worse as the area is slated to go another hot, dry summer, with many states having already issued a state of emergency.

Completed in 1936, the Hoover Dam celebrated the 85th anniversary of its last concrete pour last year in May. According to the Bureau of Reclamation, the dam alone contains 3.25 million cubic yards of concrete. Including the power plant, spillway tunnels and other equipment needed for it to operate, there are 4.36 million cubic yards of it at the structure.

Prior to its completion, Lake Mead began filling in 1934 and would eventually reach a top capacity of 1,229 feet in elevation. However, the lake is considered full when maximum water elevation reaches 1,219.6 feet. It is during these times of capacity that the lake is reported to cover 248 square miles.

The water from the lake serves a dual purpose for much of the southwest, providing Las Vegas with roughly 90% of its drinking water—while nearly one in every 10 Americans depend on the Colorado River for some of their water and irrigation purposes—and its dam (in normal years) produces 2,074 megawatts or enough electricity for 8 million people.

Regarding the reduction in capacity, however, the dam is currently producing 1,567 MW, a drop of about 25%. Bureau of Reclamation spokeswoman Patricia Aaron reports that for every foot of lake level decline, energy production loses about 6 MW.

Historically, the Hoover Dam has required water levels exceeding 1,050 feet to generate electricity, but engineers expecting a day in the not-so-distant future when the threshold won’t be met, have recently made turbine modifications so that some electricity can be produced with as little as 950 feet. 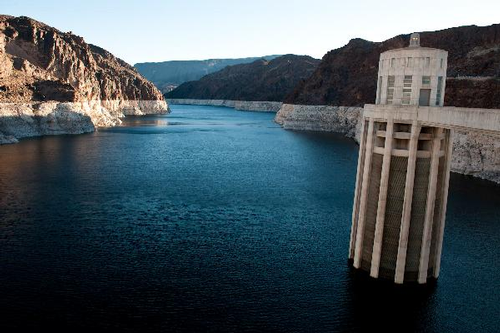 Bureau of Reclamation via Flickr / CC BY-SA 2.0
Last week, southern Nevada’s Lake Mead hit historic lows, with officials reporting that the United States’ largest reservoir by volume was at an all-time low of just 1,071.44 feet—or roughly 36% of its capacity.

Because Lake Mead receives much of its water from the Colorado River, it has become a sort of drought indicator for the entire West. Currently, the U.S. Drought Monitor reports that 55% of the area is dealing with “extreme” or “exceptional” drought—its two most severe categories. The highest-tier drought category engulfs most of southern Nevada and adjacent Utah.

While lake water levels started to witness a decline in the year 2000, Jeffrey Kightlinger, the general manager of the Metropolitan Water District of southern California, partially attributes the water decline to the last 10 years of Colorado River runoff being the driest in the river’s history.

“The conditions we’re seeing this year highlight the threat of climate change and the drying trend we’re seeing on the river,” he added. “We must continue to work collaboratively as we begin longer-term discussions on how to address the river’s supply imbalance.”

The rapid decline in recent months has prompted plans for the first-ever water shortage declaration from the federal government, according to the U.S. Bureau of Reclamation. Although Aaron suspects that elevation of Lake Mead to continue to decline until November, the Bureau is expected to issue the declaration in August of this year, which is when operating conditions are set for the following year and will indicate how distribution to states and Mexico will be affected. According to Aaron, the 2022 declaration will likely be a Level 1 Shortage Condition but would still require surrounding states to implement water-saving measures.

“While we may have less water coming to Arizona from the Colorado River in 2022, Arizona's water managers and suppliers have been taking measures to prepare and will continue to work to ensure the river remains stable for generations to come,” said Arizona Department of Water Resources Director Tom Buschatzke.

According to reports, Utah Gov. Spencer Cox recently invited Utahns, regardless of religious affiliation, for a weekend of “humble prayer for rain.” In March, Cox declared a state of emergency in wake of the impending drought.

Earlier this month, Las Vegas was reported to have become the first city in the nation to ban “useless grass” around streets, offices and housing developments in an effort to conserve water. Nevada Gov. Steve Sisolak cited the “bathtub rings” in Lake Mead for the call to action.

At the end of May, California Gov. Gavin Newsom proposed a $5.1 billion investment, slated to take over four years, for immediate drought response and long-term water investments in wake of the ongoing and expanding state-wide drought. The proposal arrived after Newsom issued a proclamation of a state of emergency on April 21, directing state agencies to take immediate action to bolster drought resilience and prepare for impacts on communities, businesses and ecosystems. At the time, the emergency was announced to exist in Mendocino and Sonoma counties due to severe drought conditions in the Russian River Watershed.

Since then, however, the drought emergency has been expended to 39 other counties, including Klamath River, Sacramento-San Joaquin Delta and Tulare Lake Watershed. Although not in a state of emergency at this time, Newsom has also announced that 41 of California’s 58 total counties to be in drought.

For immediate drought support, the plan has slated:

The plan also allots $266 million for water resilience projects to improve ecosystem health for native fish in the Sacramento and San Joaquin rivers and their tributaries; $230 million for ecosystems to improve passage for wildlife or fish; and $200 million for habitat restoration and multi-benefit projects including tidal wetland, floodplain, and flood-risk reduction projects to restore fish and wildlife habitat.