At the beginning of the month, Danish wind farm developer Ørsted announced its commitment to recover, reuse and/or recycle all turbine blades in its worldwide portfolio of wind farms once they have been decommissioned.

The decision arrives as the company reports that it has “a clear responsibility to help find solutions to the challenge of recycling blades.”

While the shift to wind farms—both on and offshore—is being adopted all over the globe, the answer of what to do with retired wind blades is still a challenge. Due to the composite materials blades are made from, recycling the wind turbine blades has proved challenging, oftentimes resulting in landfill placement.

However, with governments around the world attempting to ramp up their renewable energy, the capacity of retired wind blades will also increase, calling for a better solution. By 2030, the European Commission is looking to achieve 60 gigawatts in offshore wind farms and 300 GW by the middle of the century. By that same deadline, President Joe Biden announced that the United States planned to deploy 30 GW of offshore wind in America. In May, the Biden administration announced the approval for construction and operation of Vineyard Wind 1, the nation’s first large-scale offshore windfarm.

The United Kingdom is aiming to reach 40 GW in offshore wind by 2030, among others. 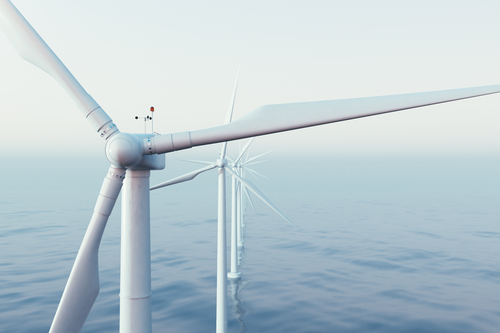 Rost-9D / Getty Images
At the beginning of the month, Danish wind farm developer Ørsted announced its commitment to recover, reuse and/or recycle all turbine blades in its worldwide portfolio of wind farms once they have been decommissioned.

In the coming decade, GWEC Market Intelligence forecasts that wind turbines will be deployed at an unprecedented pace, causing an additional 470 GW of onshore and offshore wind capacity to be installed globally between 2021 and 2025.

Despite the challenges of determining recover, reuse and recycle solutions, Ørsted reports that between 85% and 95% of a wind turbine can be recycled. However, due to their lightweight and durable designs, the blades remain a challenge to recycle properly.

Regardless, Ørsted has committed to not make use of landfilling for decommissioned wind turbine blades and plans to “temporarily store” retired blades, should finding a solution to recycle them takes “longer to solve than anticipated.”

The commitment to this incitive was made on the company’s Capital Markets Day and is part of its strategy to expand its sustainability position and work toward achieving a carbon-neutral footprint by 2040.

“We want to help create a world that runs entirely on green energy, and we want to do it in a sustainable way,” said Mads Nipper, Chief Executive Officer of Ørsted. “That includes moving towards more circular models where we reuse resources and save energy, thereby reducing carbon emissions. That is a big challenge, but we look forward to working on this challenge together with our supply chain.”

Thus far, Ørsted has only decommissioned the offshore wind farm Vindeby in Denmark, where the blades from the 11 wind turbines were all reused.

“Our ambition is to offer our customers carbon-neutral renewable energy solutions with responsible use of resources, seen from a life cycle perspective. This requires decarbonizing our supply chain, and it involves moving to more circular models of resource use in the wind turbine supply chain,” added Nipper. “I hope that our commitment will inspire others, which will help to bring scale to the market for recycling solutions of wind turbine blades, thereby accelerating the cost-out journey of the alternatives to landfilling, and help boost the already ongoing innovation in the wind energy supply chain on how to design to avoid waste.”

At the end of February last year, the Wyoming House of Representatives passed House Bill 217—which aims to ban the disposal of wind turbines in Wyoming-based landfills—in a 38-21 vote. Sponsored by Wyoming Rep. Carl Loucks (R) and Sen. James Lee Anderson (R), the bill intends to provide health and safety practices for the public while offering a solution for proper turbine blade disposal.

The legislation also offers alternatives to where old turbine blades could be discarded, such as recycling facilities or somewhere the blades can be properly broken down or repurposed.

“We need to re-purpose these blades,” Loucks said ahead of the vote. “There is lots of new research out there saying that these can be recycled. It is in the best interest of the state to not pile them up into our landfills. Have them re-purposed.”

Although, the legislation was criticized by members of Casper City Council for issues including, but not limited to, the lack of proper recycling facilities within the state and the revenue the Casper Regional Landfill was already receiving for accepting the blades to dispose.

“15% of the components [of wind turbines] are not recyclable,” Rep. Pat Sweeney (R) said at the time. “If this went into place right now, those components would have to be shipped out of state because it is a total ban.”

Due to his opposition, Sweeney suggested that the original effective date of July 1 be moved in order to make the proper arrangements. The amendment was adopted, moving the legislation’s effective date to July 1, 2024.

In another related legislation, House Bill 129 allows only the base materials of blades and towers to be buried in abandoned coal mine sites, requiring “the removal of all mechanical, electrical and other materials from the decommissioned wind turbine blades and towers.”

In December, transnational company Veolia signed an agreement with GE Renewable Energy to recycle its onshore wind turbine blades in the United States. The contract was touted as the first of its kind in the U.S. wind turbine industry.

To recycle the wind turbines, Veolia plans to turn the blades into a raw material for use in cement manufacturing, which can be rapidly deployed at scale, not only increased the environmental benefits of the wind industry.

In turning the blades into a raw material, Veolia reports that it will use a cement kiln coprocessing technology where retired blades—mainly composed of fiberglass—will be shredded at a Veolia plant near St. Louis, Missouri. The resulting materials can then be used to replace coal, sand and clay otherwise used in the manufacturing of cement.

Through this coprocessing solution, more than 90% of the blade will be reused: 65% as raw material in the cement plants, and 28% transformed into energy required for the chemical reaction in the kiln.

The resulting cement has the same properties and performance as cement manufactured using traditional means, meeting all applicable ASTM standards.

In January, civil engineers from the Cork Institute of Technology announced plans to recycle recycle wind turbines blades for a future pedestrian bridge. The bridge is slated to be installed on a bicycle route connecting the towns of Youghal and Middletown in southern Ireland.

At the time of the announcement, Angela Nagle, a civil engineering Ph.D. student at the University College Cork, and colleagues at the Re-Wind project were investigating how wind turbine blades could be repurposed for electrical transmission towers, bridges and more.

The Re-Wind project—a collaboration among researchers in the United States, the Republic of Ireland and Northern Ireland that includes funding from all three governments—dates back to 2016 when Re-Wind team lead Larry Bank, a research faculty member at the Georgia Institute of Technology, began investigating the feasibility of repurposing blades for a variety of civil engineering projects.

To put the investigations into practice, Kieran Ruane, lecturer and Chartered Civil and Structural Engineer at CIT, is leading a team of researchers and engineers to design and construct a pedestrian bridge built with decommissioned wind blades. The blades for this project in particular, have been donated by Everun in Belfast, Northern Ireland.

To kick off the project, in December 2020, three 40-foot-long wind turbine blades were delivered by truck to CIT. At the institute, the blades are scheduled to undergo a series of tests which are expected to last a few months. Through design and build efforts, the team hopes to find a way to use the wind blades as a replacement of traditional steel girders found in bridges.

The pedestrian bridge was expected to reach completion by April, where it would be installed on a nearby bicycle route.

According to reports, more than 11,000 tons of wind blades are scheduled to be decommissioned across Ireland by 2025, giving the Re-Wind team plenty of material to work with should the experiment prove successful. Oftentimes, however, blades can also be taken out of service sooner than their projected 20-year lifespan as companies replace them with bigger ones that can produce more energy. That process is referred to as “repowering.”

The Electric Power Research Institute adds that blade sizes have “increased dramatically” in recent years, from an average diameter of 145 feet in 1997 to 367 feet in 2017. The newer blades are also crafted with tougher, fiber-reinforced plastics.

The pedestrian bridge isn’t the only demonstration the Re-Wind project plans to have debut within the next six months. In addition to the bridge, a team headed by Bank plans to collaborate with an electric power company to repurpose wind blades as large, high-voltage electrical transmission towers, or “Blade Poles.”

For this project, Bank’s team plans to install three decommissioned blades on a wind farm in Kansas next summer. However, the blades won’t be connected to the electric grid during this initial trial so that Re-Wind engineers can study the recycled-blades structures’ durability.

But that’s not all, while the teams are only expected to demonstrate two of their theories this year (thus far), the Re-Wind project reports that it has numerous other ideas it would like to try out, including laying blades horizontally along stretches of coastlines to act as wake brakes and help prevent erosion, using them to build better noise barriers for highways, and separating the curved surfaces to use in skate parks, archways or art installations.

The decommissioned blades also have potential to be installed underwater to serve as artificial reef scaffolds or even used in constructing affordable housing.

Should the innovations prove technically sound and economically viable, Bank thinks they could help stave off the looming wind turbine blade waste crisis—or “black eye” as he calls it for the wind industry.

Most recently, last week GE’s renewables unit announced a deal with LafargeHolcim, the world’s biggest cement manufacturer, to further explore the concept of recycling wind turbine blades. In a statement, the firms reported that they would be looking into “new ways of recycling wind blades, including as a construction material to build new wind farms.”

The plans build on an already existing relationship between the two companies. Last June, GE Renewable Energy said it was going to partner with LafargeHolcim and another firm, COBOD International, to develop wind turbines that use 3D-printed concrete bases.