While the 2022 federal budget has a long path ahead before final approvals, President Joe Biden’s plan proposes $480 million in federal funding for the construction of Michigan’s Soo Locks.

The funding is a large chunk of the $595 million Biden has proposed for projects within the Army Corps of Engineers, Detroit District. 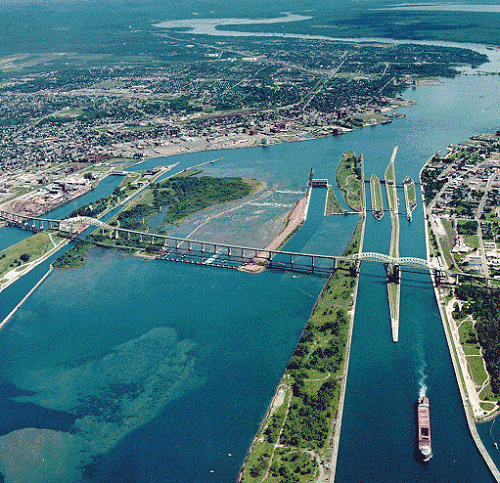 U.S. Army Corps of Engineers, public domain, via Wikimedia Commons
While the 2022 federal budget has a long path ahead before final approvals, President Joe Biden’s plan proposes $480 million in federal funding for the construction of Michigan’s Soo Locks.

In February 2020, the Corps announced that Trade West Construction Inc. would begin deepening the upstream approach channel in the spring. At the beginning of May, dredging equipment started to arrive for the first phase of the project.

“The Detroit District is looking forward to working with contractors Trade West and Kokosing-Alberici on phase one and phase two of the New Lock at the Soo,” said Lt. Col. Scott Katalenich, commander, USACE, Detroit District. “We recently had a partnering meeting with phase two contractors who are starting this year and are confident this project continues the successful construction of the new lock.”

Once the initial dredging phase is completed, crews are then slated to rehabilitate the existing approach walls further upstream in order to make them modern and safe for future vessel and ship passage. At the time, the Corps were soliciting contractors for this phase of the project.

Finally, the third phase will see construction of a new lock chamber, in addition to further rehabilitation of downstream walls and finishing work. While the lock chamber was still being designed last spring, it was recently reported to have reached the 95% design milestone and plans to mirror the existing Poe lock. Bid solicitation should begin this summer with phase three construction starting in spring of 2022.

The entire project is still expected to reach completion by 2027.

Last year, the Soo Locks project was reported to have acquired roughly 25% ($241.6 million) of funding for the project’s development. If approved, however, Biden’s proposal of $480 million for the project would increase the percentage of acquired funds to 78% or $721.6 million of the $922 million project total.

Although Biden’s proposal outlines $595 million for projects within the Army Corps of Engineers, Detroit District, for high water studies and monitoring, beach nourishment, harbor dredging and flood risk management, among others, the budget also includes $6.793 billion in discretionary funding for the U.S. Army Corps of Engineers Civil Works Program overall.