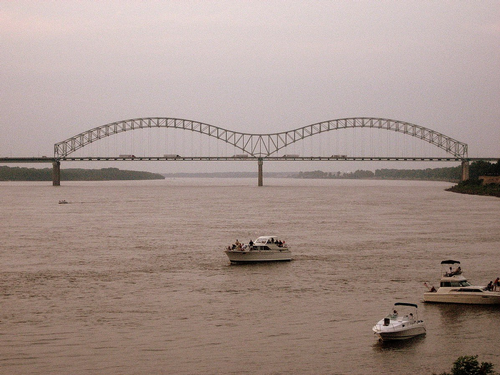 In 1992, the structure was retrofitted to withstand potential earthquake activity along the New Madrid Fault Zone. In 2013, 2015 and 2017, engineering consulting group, Michael Baker International (Pittsburgh), performed federally required inspections on the bridge, most notably because of the complexity of the bridge.

“Due to the considerable height, unique structural configuration of the trusses and heavy-traffic considerations” the ARDOT was unable to complete the inspections of the bridge itself, said the Michael Baker International website.

The bridge was most recently inspected in 2019, however, state data has not made it immediately clear who carried out the work.

During a routine inspection on the M bridge last Tuesday (May 11), a consultant discovered a crack located on bottom side of the bridge truss. The truss was later described by IDrive Arkansas as a support beam. That same afternoon, drones were sent out to further assess the cracking and seen if the issue had worsened, as a means to keep personnel and equipment off the bridge.

“To get the best visuals, drones are the way to go,” Dave Parker, public information officer for the ARDOT told Commercial Appeal via email.

At the time of the discovery, IDirive Arkansas announced that the bridge would be closed throughout that night and the following morning while crews continued to determine the extent of the crack and associated safety concerns. Traffic was diverted from I-40 to I-55 and water river traffic under the bridge was also halted.

Doug Hecox with the Federal Highway Administration noted that the closure was a prime example of how the National Bridge Inspection Standards program works to have a positive impact on the community. By employing its developed set of rules, the Administration aims to stop bridges from collapsing.

“The bridge inspectors that caught this problem and made the decision to close the bridge, they saved a lot of lives, potentially,” Hecox said. “They really did good work. This is exactly what bridge inspectors are supposed to do by putting public safety ahead of convenience.”

By Tuesday evening, officials confirmed that the fracture was on a crucial beam regarding the bridge’s structural integrity and is located near the middle of the “M.”

“This fracture had the potential of becoming a catastrophic event,” said Lorie Tudor, Director of the Arkansas Department of Transportation.

Inspections of both the crack and other parts of the bridge continued to be ongoing for several days, with officials noting that the fracture was likely due to bridge fatigue, having been open to traffic for nearly 50 years. The DOTs hoped to have a written report on the fracture within two weeks.

Paul Degges, Chief Engineer with the TDOT estimated that the Department would know more about when barge traffic could reopen sooner than vehicular traffic, as that had already been detoured, but boat traffic on the Mississippi River has no other options.

“It’s plausible that this can be months rather than weeks,” Degges told reporters.

By Friday (May 14), TDOT and ARDOT shared that after three days of intense and thorough analysis, there was a consistent message that, above all, the safety of the public was paramount, and the priority was to open the bridge to river traffic (which it did that morning); open the bridge to vehicular traffic; and look at the bridge for long-term issues related to the original failure.

While there was no indication that the bridge is continuing to deteriorate, the Departments were performing additional modeling with different analytical tools to ensure quality control to have a redundant analysis before making a final determination if the bridge was structurally stable.

At the time, a design team was looking into the benefits of installing a steel plate to beef up the fractured section and thus increase our factor of safety for the existing configuration, as well as an interim repair design concept that contemplates using steel rods that would be attached to the bridge and span over the fractured section, and provide the needed strength to reopen the bridge to vehicular traffic.

The plan would allow time for a new bridge component to be fabricated to replace the bridge's damaged 37-foot-long section. However, TDOT was also noted to be working with the University of Memphis to see what could be gained from some of their research activities on the bridge that might have captured some information regarding the fracture.

The FHWA has also asked that a section of the damaged steel be preserved so that a forensic investigation could be carried out on the pates.

All together, TDOT, ARDOT, FHWA, TDOT’s consultant Michael Baker, Inc. (MBI), and ARDOT’s consultant HNTB are working together as a structural team on deciding what will be the best plan of corrective action for the bridge.