Through a collaboration sponsored by NAVSEA 05T called the “Multifunctional Automated Repair System project,” research teams are developing a portable robot and a user-friendly operating system with the vision that it will one day be capable of automating ship repair.

The project supports one of the three mission priorities outlined in NAVSEA's Campaign Plan to Expand the Advantage 3.0 of “delivering combat power: On-time delivery of combat-ready ships, submarines, and systems.”

Originally created by Robotic Technologies of Tennessee, which builds mobile automated systems for welding, inspecting and testing tanks particularly for dangerous or expensive settings, the robot has since been modified and enhanced for the marine industry to promote faster maintenance of ships.

According to project members, the robot will also be utilized as a training aid for sailors. 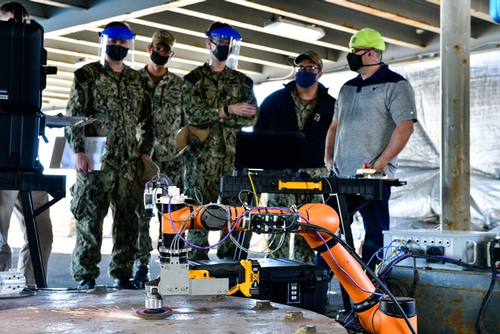 Currently, Janice Bryant, NAVSEA 05T’s strategic technology manager and program manager for the project is reportedly working alongside engineers from Penn State ARL. The concept of the MARS robot was first imagined last year by Bryant and Tim Eden, head of the materials processing division at ARL, on the back of an 8½-inch by 11-inch piece of paper after discussing the Navy’s sustainment and repair needs.

“The key advantage is portability—to be able to take maintenance out of traditional places and put it into new (locations) while a ship is underway—I think that starts to change the game,” Bryant explained. “The second advantage is this will start to change the way we approach new technology and integration; iterative development based on rapid, repeated fielding and user feedback ensures a viable, useful design.”

Over the course of three days, NAVSEA 05T and Penn State engineers recently conducted live-testing and demonstrating a prototype robot and its capabilities on NSWC PHD’s Self Defense Test Ship for feedback from Navy sailors on potential modifications. During testing, NAVSEA 05T also sought direction on tasks the robot could perform from warfare centers’ engineers and experts.

Besides having the MARS robot conduct maintenance and repair efforts, Bryant foresees expanding Navy sailors’ skills to include operating a robot as a tool to conduct their everyday jobs and reduce the amount of manual labor.

“I’m hoping that it (the MARS) helps boost our personnel retention rate as we learn how to modernize maintenance with some of the new technology,” Bryant said. “We (hope) our workforce will be more willing to stay, and we’ll attract a new user—a next-generation mechanic or artisan—who learns traditional trades but with modern industry-4.0 type methods.”

Along that line, Eden added that, “The Navy will be able to integrate new technologies quicker because of our approach, which is developing and having training videos so the sailor can log on, watch the training video, run through some motions, and get a feel for how to operate the technology much quicker. They don't have to have someone come and teach them.”

Following the days of testing, Lt. Matthew Bogue, the officer in charge of NSWC PHD’s Self Defense Test Ship and its crew, agreed that the project is an excellent opportunity for the Navy to decrease ship downtime and get vessels ready for future missions quicker than before.

Aside from possible time and cost savings through better hull preservation and avoiding the need to dry dock for repairs and maintenance, Bogue focused on the potential of the Eddy Current inspection methods and ultrasonic tools, saying that the robotic resource showed a lot of potential.

To make operating the robot more user-friendly for sailors, engineers went a step further and modified a video game controller connected to the robot's interface so that sailors could direct the robot's movements more easily. Anthony Naccarelli, research and development engineer for Penn State, said the university's Electro-Optics Center redesigned the software for this purpose.

Eventually, the project team hopes to incorporate augmented reality into the system. However, according to Naccarelli, the team’s long-term vision is to make the robot and various components easy to transport to multiple ships where they are needed. The team currently envisions a 20-foot Conex container for robot operations and set up.

David Aaron, product support office fleet supportability manager for NSWC PHD, noted his excitement for the final outcome of the project and reported that it could help the Navy tap into technology in a new way to solve problems sailors are regularly faced with.

“It’s exciting to see these kinds of tools and capabilities starting to come into fruition though an iterative development approach. It’s a stepping-stone for the workforce, seeing what’s within the arc of the possible, and helping us to think bigger and start considering alternative solutions to some of the challenges facing the Navy’s maintenance and repair community.”