The research findings have since been published in the Cement and Concrete Composites journal.

For their research, scientists combined desert sand, ceramsite particles and recycled concrete aggregate to formulate a low-cost building material. Developed into three different particle gradings, the mixtures were designed with continuous, open and interrupted gradations of solids, respectively, based on the theory of particle interference, and aimed to meet the requirements of extrusion-based 3D printing.

“Construction and demolition waste generated each year accounts for half of all urban solid waste; this threatens the urban environment,” explained the scientists in their paper. “The exploration of eco-friendly solutions is important for addressing the shortages of natural resources, and serious deterioration of the ecological environment.” 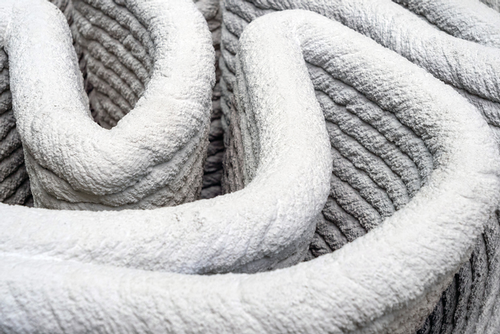 In testing the materials, the concrete substitute reportedly demonstrated a self-supporting “skeletal” effect. In the paper’s abstract, authors note that the resulted effect made by the gradated particles reduced the flowability of the mixtures, but that the structural build-up/buildability performance was improved (under the premise of the desired printability).

Additionally, the interlayer distribution and skeleton of the gradated aggregate was reported to have contributed to improved interfacial interlocking and contact bonding between layers—which could be observed through computed tomography scanning.

Taking additional tests on the formed structures, researchers found that the strongest formulation was capable of withstanding 91N of load, while its recycled concrete content served to increase the surface area between each layer, improving adhesion.

In their conclusions, the scientists suggest that adding further aggregates could help to mitigate the shrinkage seen in their cement matrix, but they also conceded that further research and development was needed to prevent potential cracking.

While the use of recycled materials is a positive move for the environment, Riyadh Al-Ameri, a Chartered Engineer and Senior Lecturer in Civil Engineering at Deakin University, recently pointed out that although desert sand isn’t depleting, the grains found in riverbeds and lakes that are also used in concrete materials are.

Typically, most concrete is made up of 65-80% aggregates, but experts are estimating that riverbed sand is being extracted at twice the rate it can be formed naturally. To mediate this issue, Al-Ameri is looking to both stop the shrinking of natural resources and to grow more waste.

His solution? A greater push to recycle glass and plastics so that they can be developed into a usable material that could one day replace the sand in concrete.

Engineers Australia Fellow Daniel Bosco, FIEAust, Founder and Director of Bluey Technologies, has pointed out that nearly everything used in civil engineering is made from a virgin resource material.

“Pulling virgin sand out of deposits around Sydney is not a long-term, sustainable solution and really not the best way for our industry to be heading. We have to find alternatives,” Bosco said.

Although a decades-long idea, Bosco, alongside other industry partners, researchers, concrete companies and councils are working to find a sustainable solution.

In November 2019, to facilitate research into increasing road longevity, the City of Los Angeles worked in collaboration with TechniSoil Industrial to evaluate using recycled plastic as a binder in newly paved roads.

In this method of road treatment, which TechniSoil spent several years developing, the company implements recycled PET plastic to take the place of bitumen. (PET plastic is often used to make water bottles, and bitumen is a byproduct of oil manufacturing that is used in asphalt.)

When deployed, what has been dubbed a “recycling train” grinds the top few inches of road, then sends the material to the back of the line, where the asphalt is crushed to a certain size and then mixed with liquid plastic. Start to finish, it results in one continuous process.

The structure was made of three materials including CNC-milled birch plywood flooring, a robotically 3D-printed concrete base and a series of 3D-printed PETG stems, a plastic polymer up-cycled from 30,000 discarded water bottles.

The pavilion was completely prefabricated offsite and putting the parts together required no heavy machinery, the firm added.

And in February, on a more modern recycling take, researchers from RMIT University developed a recycling solution single-use face masks. In the study, the research team shows that materials recycled from nearly 3 million recycled face masks could be used to produce just one kilometer of a two-lane road. By recycling the materials, the university reports that 93 tons of pandemic-generated waste was diverted from landfills.

The combined materials are envisioned to be utilized for base layers of roads and pavements. With an estimated 6.8 billion disposable face masks being used across the globe each day, the study certainly has a lot of potential material to work with.

Made up of four layers, the roads consist of a subgrade, base, subbase and are topped with asphalt. The processed building rubble—also known as recycled concrete aggregate—can be used for all three base layers as the material successfully withstands heavy pressure. However, in adding the shredded face mask material, researchers found that in addition to strengthening the material, the process addresses both PPE disposal and construction waste.

By combining 1% recycled face masks and 99% process building rubble, the team found an optimal mixture that delivers on strength and maintains cohesion between the two materials. Researchers also tested the mixture against stress, acid and water resistance, as well as strength, deformation and dynamic properties, which met all relevant civil engineering specifications.

In addition to working with materials for road construction, RMIT researchers are also looking at using the shredded masks for concrete. Li reports that his team was inspired to look at other uses for the masks after seeing so many be littered in the streets.

The study, “Repurposing of COVID-19 Single-Use Face Masks for Pavements Base/Subbase,” has since been published in the journal Science of the Total Environment. Co-authors of the study include RMIT Indigenous Pre-Doctoral Research Fellow, Shannon Kilmartin-Lynch, and Research Assistant, Mahdi Boroujeni.