At the beginning of April, China’s National Development and Reform Commission issued the “2021 New Urbanization and Key Tasks for Urban-Rural Integration Development” Notice.

Demanded by Chinese leader Xi Jinping, the Commission has officially placed the construction of “ugly” and “weird” buildings under strict restriction.

The notice arrives in the first year of the “14th Five-Year Plan," a year of special importance in the process of my country's modernization drive.

Although the document doesn’t actually define what qualifies as “ugly” or “pleasing” to the eye, the notice follows Jinping's initial complaints about the “weird” buildings that first started popping up around 2014.

In addition to restricting the “ugly architecture,” the notice also calls to strictly limit the construction of “super high-rise buildings over 500 meters.” Currently, there are seven skyscrapers in the world that are 500 meters tall, and China boasts five of them. According to the Council on Tall Buildings and Urban Habitat, China also holds the record for the greatest number of buildings completed that are over 200 meters tall or greater in 2020, having constructed 56.

While it is no comparison, the country is followed by the United Aarab Emirates, with 12 new skyscrapers erected last year. 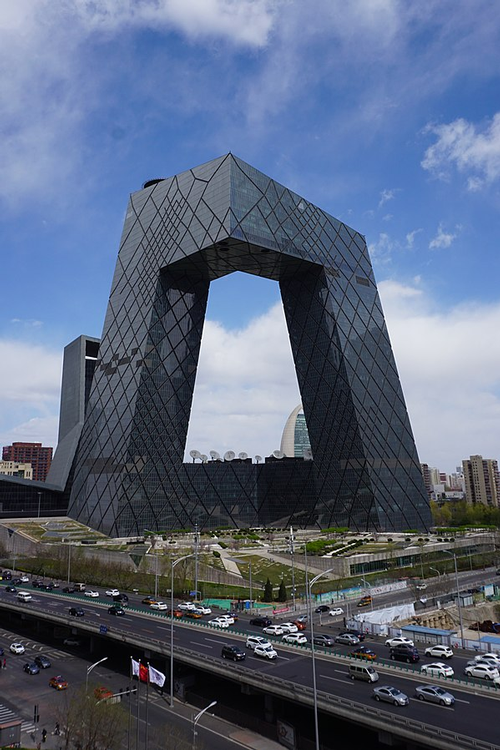 “Fine artworks should be like sunshine from the blue sky and the breeze in spring that will inspire minds, warm hearts, cultivate taste and clean up undesirable work styles,” Jinping said.

In the recent directive, the notice adds that local governments should construct buildings that are “suitable, economic, green and pleasing to the eye.”

Regarding the upbeat of strange buildings, the South China Morning Post attributes the rapid urbanization the country has undergone the past 40 years, highlighting numerous projects such as the “giant trousers” structure of the China Central Television headquarters in Beijing, to the half-Temple of Heaven, half-U.S. Capitol building in Hebei.

Other cited structures include the 2,000-seat Sunac Guangzhou Grand Theatre, The People’s Daily news service headquarters and the Guangxi Center of New Media in Nanning, Guangxi.

“We’re in a stage where people are too impetuous and anxious to produce something that can actually go down in history,” Tongji University College of Architecture and Urban Planning deputy head Zhang Shangwu told the Post. “Every building aims to be a landmark, and the developers and city planners try to achieve this goal by going extreme in novelty and strangeness.”

Besides these more permanent structures, the country has also witnessed the erection and disassemble of various replicated iconic foreign architecture, from European renaissance towns to American neoclassical halls of governance.

In opposition of the proposed changes to the country’s architecture, Han Tao, from the Central Academy of Fine Arts, said architecture should never be uniform, despite China’s rethinking of how its cities should look.

“Contemporary culture is diverse and there should not be just one voice,” he added, urging authorities to protect the space for public appreciation of beauty and experiments of architects.

Since first expressing his distaste, however, Xi is pushing forward to end “oversized and weird” buildings.

“To embody the spirit of the city, to show the style of the times, and to highlight Chinese characteristics, we hereby notify the relevant matters as follows,” his new architecture policy reads. “Architectural designs must conform to urban design requirements in terms of shape, color, volume, height and space environment.”

The full notice can be viewed, here.

In December of last year, former President Donald J. Trump signed the, “Executive Order on Promoting Beautiful Federal Civic Architecture,” which ordered all federal buildings in Washington, D.C., as well as new federal courthouses and certain other federal buildings be designed in “classical” or “traditional” styles of architecture.

The order defines classical or traditional styles as Neoclassical, Georgian, Greek Revival and Gothic and cites ancient Greece and Rome as well as Siena as preferred models.

Trump first introduced his Executive Order, at the time called, “Make Federal Buildings Beautiful Again,” in February. Such an order aims to roll back a decades-long tradition that bars the government from taking a stance on an official architectural style, according to reports.

The draft, originally obtained by both the Architectural Record and The New York Times, criticized the General Service Administration’s Design Excellence Program for its failure to reintegrate “our national values into Federal buildings” and specifically takes issue with Brutalism and Deconstructivism.

However, in March of this year, President Joe Biden reversed the Executive Order 13967 of Dec. 18, 2020 (Promoting Beautiful Federal Civic Architecture).

The AIA promptly issued a press release commending the Biden Administration with AIA 2021 President Peter Exley, FAIA, saying that: “By overturning this order, the Biden Administration has restored communities with the freedom of design choice that is essential to designing federal buildings that best serve the public. This is fundamental to an architect’s process and to achieving the highest quality buildings possible. We look forward to continuing to work with the Administration towards developing policies that create healthy, just and equitable communities.”

The AIA noted that it had been working to stop the order since its inception and said that AIA members sent out more than 11,400 letters to the White House condemning the action.

Additionally, the AIA had been advocating for The Democracy in Design Act, which was introduced by Rep. Dina Titus (D-Nevada) on July 15. The Act would have not only thwarted the Executive Order but would have done so by codifying the GSA Design Excellence Program principles into statute and ensuring the federal government maintains neutrality on architectural styles.