Building software firm Autodesk recently confirmed in a press release that it will be helping Notre Dame Cathedral officials by contributing design and construction solutions to the rebuilding efforts, including BIM support and technical expertise.

According to the company, this partnership allows the conservation and restoration of the cathedral to enable cloud collaboration among stakeholders, making a common data environmental that will be the central point for project information.

“I warmly thank Autodesk for supporting the rebirth of Paris Notre Dame Cathedral. Using digital technologies designed for the supervision and management of the restoration site is essential for the public institution. Thanks to Autodesk’s patronage, the use of cutting-edge design and construction technologies and BIM, are being leveraged to help prepare for the reopening of the cathedral, and to once again welcome both pilgrims and visitors,” said the Army General Jean-Louis Georgelin, President of the public establishment dedicated to the conservation and restoration of Notre-Dame de Paris cathedral.

In addition to the collaborative support, data created using reality capture technologies prior to the fire allowed Autodesk to create a 3D BIM model of the Notre Dame Cathedral as it existed before the catastrophic 2019 fire. Autodesk has now used recent scans to create 3D models post-fire for comparison. 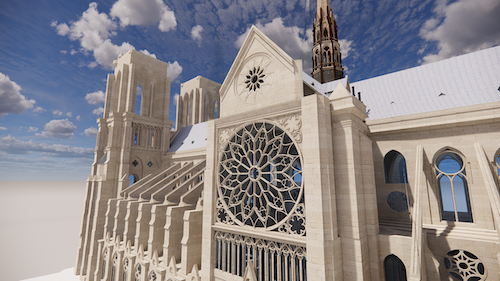 BIM
Building software firm Autodesk recently confirmed in a press release that it will be helping Notre Dame Cathedral officials with by contributing design and construction solutions to the rebuilding efforts, including BIM support and technical expertise.

“We are humbled to participate in the restoration and future preservation of the Notre Dame Cathedral, a truly magnificent architectural wonder of the world. Since the devasting fire two years ago, we have provided funding and technology to support the effort through the French Fondation du Patrimoine (Heritage Foundation) and this announcement reinforces our commitment,” said Nicolas Mangon, Autodesk Vice President of Business Strategy for Architecture, Engineering and Construction Design Solutions.

On more dense surfaces like granite, workers used a special gel to coat the contaminated surface, which was left to dry for several days and is then removed, pulling out any lead particles that became embedded in the stone.

Most recently, at the beginning of this year, new scaffolding was being erected as decontamination and cleaning continues ahead of restoration and rebuilding work.

However, along with the cleaning update at the beginning of the year, aesthetic debate was still raging when a draft of plans was published in the French media. Some proposals included replacing the historic glass-stained windows in the chapel’s nave with more contemporary ones.