A new construction phase was recently launched at the 88MW Hywind Tampen offshore wind project in a deep-water site at Dommersnes in the North Sea.

Kicking off in October of last year, the Hywind Tampen project will be the first floating offshore wind project to supply renewable power for oil and gas installations. With a total capacity of 88 MW, the wind farm is projected to cover roughly 35% of the annual power needs on the five platforms Snorre A and B and Gullfaks A, B and C.

“Hywind Tampen is a new chapter in Norway’s narrative as an energy nation. With support from the Norwegian authorities, we're not only building Norway’s first offshore wind project; we're refining floating offshore wind technology along with the Norwegian supplier industry,” said Equinor President and CEO Eldar Sætre at the time. 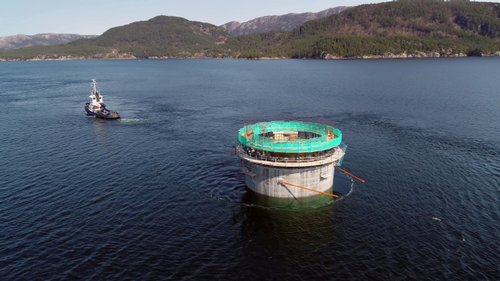 Equinor
A new construction phase was recently launched at the 88MW Hywind Tampen offshore wind project in a deep-water site at Dommersnes in the North Sea.

The Hywind Tampen is slated to cost just under NOK 5 billion (around $605 million). Through Enova, the Norwegian authorities have awarded funding support up to NOK 2.3 billion. The Business Sector's NOx Fund has also decided to support the project with up to NOK 566 million.

For the project, Siemens Gamesa Renewable Energy was awarded a turbine supply agreement, where they will head the design, procurement and fabrication of the wind turbines, assembly and completion on land and at sea. Turbine maintenance is expected to be carried out by Siemens Gamesa's Norwegian service organization, which has been awarded a 5-year contract in connection with the wind turbine delivery.

Kværner AS will be working on the design, procurement and fabrication of hulls and marine operations, and administration of assembly site, as well as planning and execution of all activities at the assembly site and design and installation of the anchoring system. Kværner will also handle all marine activities associated with assembling the wind turbines on land, moving the floating wind turbines, and towing and anchoring out on the field.

The turbines will be assembled at Wergeland Base in Gulen in Vestland county, while JDR Cable Systems has been awarded to design, procure and fabricate the export of cables and cables between each wind turbine. Subsea will carry out cable installation efforts between the turbines and Snorre A and Gullfaks A. Wood group will be responsible for modifications on the Snorre and Gullfaks platforms.

With a 167-meters (about 548 feet) diameter rotor and 81.5-meter-long blades, each turbine in the wind farm will have a swept area of 21,900 square meters. Once completed, the project is estimated to reduce CO2 emissions by 200,000 tons per year.

Crews are now transporting 11 substructures from the Aker Solutions yard where the first 20 meters have been built at the deep-water site at Dommersnes. However, slipforming work will continue to 107.5 meters.

Steel anchors for the project are also being welded at the Aker site. The nacelles, blades and turbine towers will be produced in Europe and shipped to Wergelands base in Gulen. Once completed, the substructures will then be towed to Gulen when the slipforming and mechanical completion work is completed at Dommersnes.

Adding that, “The giant Troll A substructure was 369 metres. Now we are building 11 small Trolls. The project is on schedule despite the challenges around COVID-19.”

In 2022 all the elements will be collected at the site in Gulen and the assembly work will start using what is probably the largest crane that has been onshore in Norway.

Scheduled to complete later that year, the Hywind Tampen will be the world’s largest floating offshore wind farm and the world’s first to power offshore oil and gas platforms.

“We plan to start towing the completed wind turbines to Tampen early summer of 2022 and complete the offshore work by the end of the year. This is a large and complex industrial project where we use our experience from oil and gas projects,” said Haga.

By October 2019, Equinor was reported to have been working in a joint venture with SSE Renewables (Perth, United Kingdom) on Britain’s three Dogger Bank offshore wind projects located throughout the North Sea. In total, the wind farm will compromise of three 1.2 gigawatts, creating a combined capacity of 3.6 GW, making it one of the largest wind farms in the world.

Specifically, SSE was tasked to lead the development and construction phases, while Equinor would lead operations after building was complete.

Work officially kicked off on the project in February 2020.

In his address, “Reimagine | Rebuild | Renew,” Cuomo highlighted what is envisioned to be the largest offshore wind program in the United States. Made up of two offshore wind farms, the program is projected to yield a combined 2,490 megawatts of carbon-free energy.

The program is projected to bring in $8.9 billion in investments and create more than 5,200 jobs. Heading the project, Cuomo reported that the state had already contracted Equinor Wind US LLC, who is committed to manufacturing wind turbine components within the state.

As part of the offshore agreement—which will place the two offshore wind farms more than 20 miles off the shore of Long Island—Equinor will also be revitalizing the South Brooklyn Marine Terminal and the Port of Albany into large-scale offshore wind working industrial facilities.

While the state confirms it has already secured commitments from Equinor and other companies to manufacture wind turbine components and build the nation's largest offshore wind program, Cuomo also outlined upgrades to create five dedicated port facilities, including:

According to Cuomo, the projects will leverage almost $3 of private funding for every $1 of public funding, for a combined $644 million investment. The ports plan to yield 2,600 short- and long-term jobs in the offshore wind industry.