“We urge you to use your regulatory authority to supersede New York’s absolute liability standard. In doing so, the federal government can save hundreds of millions of dollars on the Gateway tunnel project,” the letter reads. “This will ensure that federal dollars go towards the critical work of repairing the rail infrastructure of the New York City metropolitan area, rather than inflated liability insurance costs.”

Over a hundred years old, the Scaffold Safety Law (Labor Law 240) is unique to New York in that it makes contractors and property owners 100% liable in injury lawsuits if they fail to provide adequate equipment or training. Although, over the years multiple calls to revamp the legislation have been attempted.

In 2015, the revamp gained new momentum fueled by two bills, 25 legislative sponsors and even a “Reform Day” in the capital to promote the effort.

The law's backers—unions, safety groups and worker advocates united under the Scaffold Safety Coalition name—call the law a “common sense” measure that holds employers' feet to the fire in requiring protection for workers who don't know (or are afraid to invoke) their rights. However, critics who have been calling for change for years, said they wanted a more equitable “comparative negligence” standard, which would consider the employee's fault. 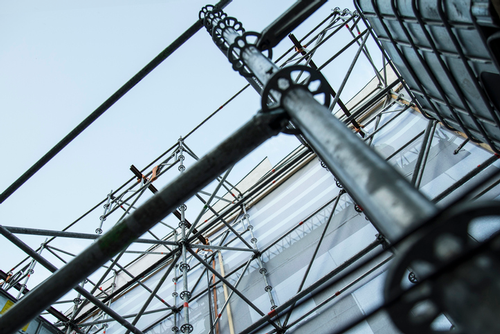 At the time, the bill's two versions, S00543 / A03209, were sponsored by Sen. Patrick Gallivan (R-Elma) and Assembly Majority Leader Joseph Morelle (D-Irondequoit). There were 11 co-sponsors between the two versions of the bill and 12 additional sponsors on the Assembly side. Both versions went before their respective judiciary committees earlier that year in January.

The bill maintains the right of any injured worker to sue, but “attempts to contain the costs of absolute liability in a fair manner by making an employee who directly contributes to his injury liable for the portion of fault assessed by a jury for his own conduct.”

“[I]t makes a recalcitrant worker responsible for his own conduct,” the bill stated. “This approach encourages workplace safety by encouraging workers to take responsibility for their own safety.”

The Scaffold Law Reform Coalition previously tried to push for the passage of Assembly Bill 2835-2011, which would have given commercial property owners, business owners, contractors and municipalities the chance to defend themselves in court when an injury occurs due to negligence. (Homeowners are already exempt.)

By 2017, Common Good issued a report stating that New York taxpayers pay upwards of $785 million per year to fund insurance costs for public at-height construction associated with the Scaffold Law. According to the report, in 2012 alone, the law was involved in 16 out of the state's 30 largest settlements, the highest resulting in $15 million. The frequency of cases cited by law was also noted to have increased—from 1990-1992, an average of 63 cases per year cited the Scaffold Law, but from 2010-2012 that number increased to 330.

For ongoing projects of the time, reports suggested that the Tappan Zee Bridge could cost approximately $200 million in insurance to cover Scaffold Law claims, while the Gateway Project's $13 billion in planned tunnels under the Hudson River could result in $180 to $300 million in added insurance costs.

Last year, the Scaffold Law Reform Coalition penned a letter to New York Gov. Andrew Cuomo requesting that the state’s budget be used to scrap the law. The coalition argued that the restrictive law was costing millions of dollars in state and municipal budgets, hundreds of millions in infrastructure costs and approximately $200 million a year in education budgets across the state.

The group also noted that in wake of COVID-19 that financial outlooks were “bleak” and getting rid of the Scaffold Law and its “outdated absolute liability standard [in favor of] a more equitable and modern comparative negligence standard” would be a simple fix.

Most recently, last month OSHA revealed its annual top 10 most frequently cited workplace safety standards for fiscal year 2020, highlighting that Fall Protection—General Requirements remained the most frequently cited standard for the 10th year in a row. However, Scaffolding also made the top 10, reporting 2,538 citations.

In the letter to Buttigieg, the coalition is again requesting that the regulation be waived, citing the same claims to cost increases regarding the Hudson River Tunnel and Mario Cuomo Bridge made just four years prior. This time around, however, the group suggests that the law be replaced with a comparative negligence standard, where NYDOT would mandate the comparative negligence standard for any project receiving federal grants.

The standard is already used by other states use to determine liability in the case of an injury.

Even still, the New York Committee for Occupational Safety and Health maintains that the regulation proteneglcts workers who perform the most dangerous jobs in construction.

In reporting from their perspective on the mater, the NYCOSH points out that contractors only have liability for fall injuries if they do not provide the proper safety equipment or violate safety and health regulations, suggesting that companies should allow insurance providers to allow an evaluation of their records so that it can be determined if the Scaffold Law is really behind rising policy prices.

Although Buttigieg recently reported that the tunnel replacement and repair project between New York and New Jersey would be a priority for President Joe Biden's administration, he has not issued a response to the letter at this time.

Last year, the Hudson River rail tunnel project was reported to have climbed in cost and time, although not due to any scaffolding law issues, the price tag sits at $11.6 billion (a $275 million hike from the previous estimate of $11.3 billion), while the start date was pushed back to 2022.

At the time, officials were waiting for environmental reviews, but in wake of the price hike, also faced financial uncertainty for the massive project. The project itself is art of Amtrak’s massive Gateway Program, developed in 2017 to overhaul parts of New York’s and New Jersey’s transportation infrastructure, included plans to build the Hudson Tunnel from 2019 to 2026.

The tunnel was thought as one of the most important transportation projects in the nation, in part because it would allow for the reconstruction of the North River Tunnel. Completed in 1910, the North River Tunnel was already well into its prime when in 2012, Super Storm Sandy inundated it with millions of gallons of salt water, which left behind corrosive chlorides.

An engineering report from 2014 claimed the Amtrak tunnels would require $689 million to repair the corrosion and cracking caused by Superstorm Sandy. The 57-page report, "Structural Assessment of the Amtrak Under River Tunnels in NYC Inundated by Super Storm Sandy," found that chlorides and sulfates caused, and were continuing to cause, significant damage to key tunnel components.

In addition, the report recommended a phased process to take individual tubes out of service for extended periods to perform repair work—ultimately underscoring the urgency to advance the Gateway Program.

According to a statement released by the Gateway Program, the project was submitted in response to the Federal Transit Association’s annual call for projects for the Capital Investment Grant Program.