In a recent news report, officials supplied an update into the progress of the restoration on the George Washington Bridge in New York City.

The $1.9 billion “Restoring the George” project launched in 2015 and is comprised of 11 projects. The structure was opened to traffic on the upper level in 1931 and the lower level in 1961 and reaches 4,760 feet between its anchorages.

Starting back in 2015, restorations on the George Washington Bridge began with the rehabilitation of the lower street level, removal of lead paint, along with the replacement of movable maintenance platforms (travelers). All a part of the project’s first contract, work involved priority repairs to structural elements found within the underside and lower level supporting steel members, in addition to the lead paint removal, repainting and traveler replacement.

Work on this portion of the project was completed in 2017 and was reported ensure that the bridge maintains a state of good repair.

Around the same time, the bridge also underwent pavement rehabilitations on its lower-level eastbound main span and associated approach spans to provide a smoother riding surface for motorists. The pavement rehab was completed in 2016. 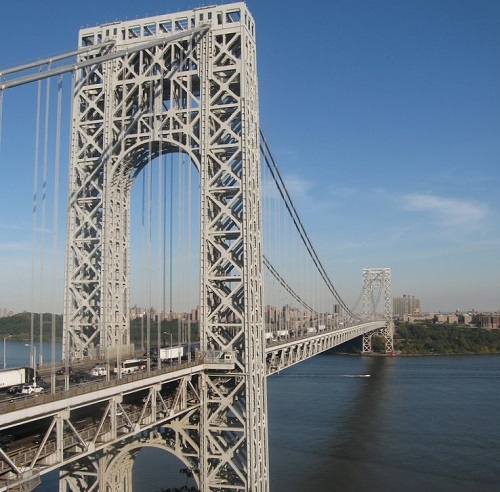 Port Authority of New York and New Jersey
In a recent news report, officials supplied an update into the progress of the restoration on the George Washing Bridge in New York City.

Following the completion, the bridge underwent the replacement of its palisades interstate parkway helix, while its upper level spans over the Hudson Terrace and New Jersey Anchorage were rehabilitated. The new IP Helix Ramp improved roadway geometry and safety, meet modern seismic code, and provided new, smoother roadway surfaces on the upper-level approach spans. This portion of the structure’s restoration was completed last year.

In 2017, replacement efforts for the structure’s suspender ropes and the rehabilitation of the main cables started to take place. For this portion of the capital project, crews would:

A year into this portion of the project, GWB general manager Ken Sagrestano told reporters at the time that, “When we’re done with this group of projects we’re gonna have done something for the cyclists, for the pedestrians, for the motoring public.”

Regarding the cables themselves, Roger Prince, the Port Authority’s deputy director of operations and capital program delivery added, “We expect them to last well into the next century—a once-in-a-lifetime kinda thing.”

While other projects continued to launch in 2018, by 2019 Paint BidTracker reported that the Port Authority of New York and New Jersey were seeking contractors for the rehabilitation and recoating of the underside and lower level.

Estimated to cost between $150-$200 million, the project involves the removal of lead paint, repainting and replacing the movable maintenance platforms for the remaining structural repairs to the underside and lower level supporting steel members.

Unless otherwise specified, steel was scheduled to be abrasive blast-cleaned to Near White (SSPC-SP 10) using a production line shot and grit blast machine, or by air blasting. The chosen contractor would use SSPC-VIS 1 to evaluate the degree of cleaning. Steel members were to be coated with a zinc-rich coating system. However, the system was subject to change according to project requirements.

Because the existing coatings contain lead and asbestos, containment for the project was required.

Still ongoing, the second portion of the lower-level project is expected to reach completion by 2024.

Launched in 2019, the George Washington Bridge started to have its severely deteriorated median barriers replaced with code-compliant concrete barriers. Additional work also incudes the replacement of the structure’s water system main line and lateral pipes and concrete repair. The Trans-Manhattan Expressway median barrier and water system rehab is expected to complete sometime in 2023.

Last items include the rehabilitation of the 178th Street and 179th Street ramps, which launched in 2018 and is expected to be completed by 2025, as well as the rehabilitation of the Trans-Manhattan Expressway overpasses. However, the TME Overpass project is still awaiting authorization, but is expected to launch sometime this year and finish in 2026.

Regarding the project’s recent update, CBS reported that currently, half of the 592 suspender ropes on the structure have been replaced and that cables are receiving a special system to protect from corrosion.

“These main cables are really the backbone of the bridge and we want to make sure that it can continue to support the traveling public for many years to come,” said Ken Tripaldi, head of construction on the project.

“Once we complete all the work on the north side and are able to open up to pedestrian traffic including the public, then we’re going to move over the south side.”

Tripaldi expects this work will begin in the summer of 2022.

“When you think of this bridge as the world’s busiest bridge, and you have to renovate it, every piece of it… to do that while the vehicles are using the bridge is an enormous challenge,” said Rick Cotton, executive director of the Port Authority of NY & NY. “It does take time because the time you can have construction underway is limited.”

Once completed, the project has been touted as a “once in a generation or lifetime,” meaning that once it’s completed, we won’t see this work again.

Last May, the Supreme Court Justice Elena Kagan announced in a 15-page ruling that the cases against New Jersey officials Bridget Anne Kelly and Bill Baroni—involved in the "Bridgegate" political scandal—were fraudulent and, therefore, would be throwing out the convictions.

Back in 2013, reports claimed that former high-ranking official in the Port Authority of New York and New Jersey, Baroni, and former staffer of the New Jersey governor's office, Kelly, were involved in what was later referred to as the “Bridgegate” scandal, which tied up traffic in the town of Fort Lee, New Jersey—specifically on the George Washington Bridge—for several days.

During the shutdown, occurring from Sept. 9 through Sept. 13, 2013, traffic on the Fort Lee side of the bridge came to a standstill, with school buses delayed for hours and emergency vehicles unable to make progress in the gridlock. One woman whose ambulance was delayed by the traffic later died of cardiac arrest at the hospital, though her family declined to blame the traffic for her death.

At the time, officials said the lane closures were part of a traffic study on the bridge, but evidence uncovered after the closure indicated that Baroni and Kelly knowingly caused traffic issues in retribution for Fort Lee Mayor Mark Sokolich’s refusal to endorse New Jersey Gov. Chris Christie in his bid for re-election. Local officials in Fort Lee were reportedly kept in the dark about the shutdown.

Following her 13-month sentence, Kelly was reported to have remained free after her sentencing pending her appeal, while Baroni received an 18-month term and opted to report to prison. Baroni was later released on bail after the Supreme Court agreed to hear their case.

In January of 2020, attorneys for both Kelly and Baroni argued that the government used federal anti-theft and anti-bribery statutes—Section 666 of Title 18 of the United States Code—to prosecute in relation to fraud and embezzlement. The statues are reported to have a provision which allows for use against public officials who misappropriate property for a purpose other than it is intended—in this case, the George Washington Bridge.

U.S. District Judge Susan Wigenton, who presided over the trial, rejected the defense as there was no “legitimate justification” for the defendants’ conduct. The arguments and convictions were later largely upheld by the Court of Appeals for the Third Circuit.

Kagan added in delivering the opinion for the unanimous Court, that although the decision to abuse Port Authority resources jeopardized the safety of residents, not all corrupt acts conducted by state or local officials are federal crimes. Kagan continued that the aides' scheme did not aim to obtain money or property, and therefore Kelly and Baroni couldn’t be convicted for violating wire fraud laws.