According to an article published by the Wright-Patterson Air Force Base, testing completed on the NASA Perseverance's protective coating at the WPAF Research Lab aided the rover’s touchdown success on its mission to Mars.

Researchers at the lab reportedly conducted unique erosion testing on Perseverance prior to its mission. The rover landed on Mars on Feb. 18.

Described as being roughly the size of a mid-sized car, NASA’s Perseverance Rover is decked out in lasers, sensors, cameras and other highly specialized electronic equipment. For this reason, the rover required a collection of protective coatings to preserve its sophisticated equipment and ensure the success of the mission.

Upon reviewing its options in the coatings industry, as in previous space projects, NASA landed on DuPont’s technology, which for Perseverance specifically, included Kapton polyimide films and Pyralux copper-clad flexible circuit laminate materials, to power and protect the rover over the course of its journey.

“Our Kapton HN polyimide film was on the Apollo 11 mission over 50 years ago, recently celebrated 20 years of service on the International Space Station and is part of the current Mars Perseverance Rover project,” said Tim Scott, E&I Business Development Leader for the Aerospace & Defense market segment, on DuPont and NASA’s history.

Scott added that during the 1969 Apollo 11 mission to the moon—where Neil Armstrong and Buzz Aldrin first set foot on the lunar surface—20 of the 21 layers in his space suit were made with DuPont inventions, including DuPont Nomex fiber and Kapton polyimide film. The Kapton film was also used to coat the heat shield of the Apollo Command Module “Columbia,” while the U.S. flag placed on the moon was made of DuPont nylon.

Other space missions featuring the use of the materials were the Mariner, Voyager and Messenger programs that measured Mercury and Venus’ environment, atmosphere and captured images of their surfaces, and the 2015 New Horizons mission that explored Pluto and its moons. 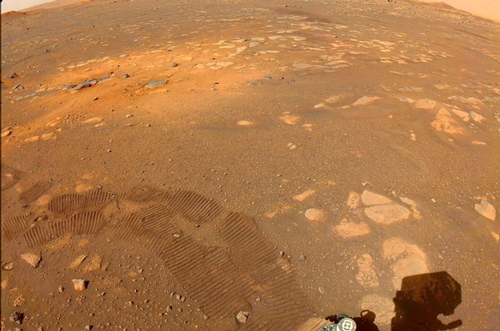 In previous explorations to Mars, NASA also reportedly used DuPont’s Pyralux flexible circuits and pressure-sensitive tape made from Kapton polyimide film to control vibration on twin rovers Spirit and Opportunity. The materials offered a durable, lightweight environmental resistance for the temperatures on Mars, that ranged from minus 120 degrees Centigrade (minus 184 degrees Fahrenheit) to 22 C (72 F).

Due to the success rate of the Pyralux and Kapton products, Scott expects the DuPont coatings will continue to play a key role in the development of advanced antennas suitable for smallsat applications. Moving forward, he adds that a new product showing promise for space exploration is the company’s white-colored Kapton polyimide film for use on deployable radiator panels or as the outer surface of a multi-layer insulation blanket for passive thermal control.

The product was recently tested by Airbus Defense and Space in Europe and the positive findings were presented during a conference of the European Space Agency late last year.

“We have been able to demonstrate that our technology performs reliably in the extreme heat, cold and space weather conditions experienced by vehicles involved in outer space mission or in satellites orbiting the earth,” Scott said. “As these space missions get more complex, we continue to look for new ways to use our existing technologies or develop new ones to meet the ever-growing technological challenges being faced.”

When Perseverance landed on Mars in February, it was lowered to the surface using a “Skycrane.” The system works like a heavy-lift helicopter, or an aerial crane, used in industry. However, because of Mars’ thin atmosphere, something bigger than helicopter blades would have to provide the needed lift, therefore, NASA attached rockets to the space Skycrane.

The rockets were deployed during the final moments of descent, following a heat shield and parachute to slow the spacecraft’s speed from about 12,100 mph—when it hits the top of the atmosphere—to about 190 mph when it was about 6,900 feet above the Martian surface. Once initiated, the rockets were able to slow the craft to 1.7 mph by firing toward the planet’s surface.

However, the issue with this method, while it proved effective, was that it kicks up a tremendous about of debris consisting of dust, rocks, sand and other fast-moving projectiles—which could have been lethal to the mission.

This is where pre-mission testing came into play at the AFRL.

Once NASA’s Jet Propulsion Lab formulated a protective coating for the craft that would withstand such a barrage, AFRL’s Materials and Manufacturing put the coating to the test in its unique erosion testing equipment, complete with a windowless bunker. In previous mission testing, the erosion rig was used to test coating durability for the Mars Science Laboratory in 2008 and the aforementioned Curiosity Rover in 2011.

In its report, the WPAF notes that the rig’s initial purpose dates back to the Cold War when aircraft coatings were being tested against debris kicked up by nuclear weapons. The testing equipment has since been rebuilt a few times, most notably in 2005.

Like prior simulations, the rig replicated potential damage caused by the debris blasted by the rockets toward the landing craft, moving particles within the rig at speeds of up to 500 mph. Besides sand and other physical materials erosion rig is also capable of testing for rain erosion.

“We are a unique one-of-a-kind facility,” said Matthew Hartshorne, Erosion Area Lead Engineer. “No other lab in the world conducts continuous, calibrated sand erosion at these velocities.

Hartshorne continued, “We are also working on a design to increase our capability to supersonic speeds, which will benefit NASA, along with the Department of Defense community, but that is several years away.”

For the test on Perseverance’s protective coating, NASA provided the necessary data on particle sizes for the test debris. “They sent us a request to test everything from very small dust-sized particles up to gravel. It was about a three order-of-magnitude size range,” said Hartshorne, further explaining that tests weren’t conducted by mixing all the different sizes of debris, but that the coating was tested by blasting each size of test sample individually. The reason for the multiple tests is that “each size takes a different ballistic arc based on its mass and drag.”

The erosion lab also used a gravelometer to test larger sizes of debris, where NASA actually sent the lab their simulated Mars rocks for testing. Hartshorne’s team assisted the JPL team with a multi-day testing event, including complete test set-up, testing and insights on possible failures.

The researchers note that without the testing at AFRL’s Materials and Manufacturing erosion lab, landing Perseverance safely would not have been so assured.