According to the Mayor of Tallassee, Alabama, John Hammock, the city is aiming to use some of its COVID-19 stimulus package money to fund the recoating of a downtown water tank.

In total, city is expected to receive well over $800,000 from the most recent stimulus package.

In expanding on that statement, the mayor reported to The Tallassee Tribune that city officials managed the first round of funding in an effective manner, choosing to purchase PPE equipment, among other things, but was reimbursed through the CARES Act.

“Also, we had an uptick on our sales tax because a lot of people were working from home,” Hammock continued. “They weren't traveling to Montgomery or Auburn. They were eating lunch here. They were spending money at Walmart, True Value doing home repairs, things like that while they were staying safer at home.

“So, we were actually up $70,000 in sales tax. Cities like the City of Tallassee that are in this situation, they can use this money for water, sewer type projects, or broadband, which we're not in the broadband business.” 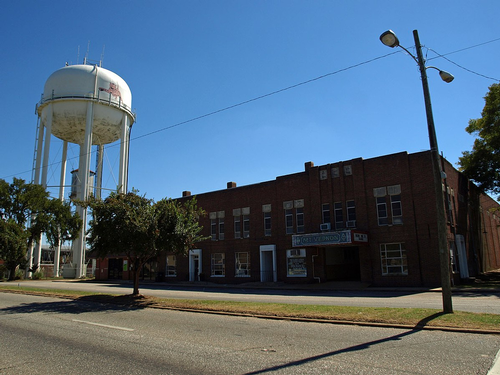 Chris Pruitt, CC-BY-SA-3.0, via Wikimedia Commons
According to the Mayor of Tallassee, Alabama, John Hammock, the city is aiming to use some of its COVID-19 stimulus package money to fund the recoating of a downtown water tank.

In looking at what could be done with the stimulus money, Hammock pointed out that the city had been in discussion regarding a series of infrastructure projects, however, one in particular had been discussed more than others: the coating of the downtown water tank.

“That tank is really a focal point in this town,” he said. “It is something that needs to be done. All of the water comes from the water filter plant to that tank, then it goes to the other tanks like Carrville, the Burlington tank, the Tallaweeka tank. It's a very important piece of our infrastructure.”

According to reports, once the federal dollars are in the city’s possession, officials expect to begin work pretty quickly. The downtown water tank would require being taken down, blast-cleaned inside and out, recoated and placed back into position. The water tank will be repainted using the same logo that was recently painted on the Tallaweeka water tank, and what it planned to be coated on all of the highly-visible water tanks in the area.

A decades-old water tank next to the downtown tank would also be removed using the federal funds.

The city estimates that the blasting and coating of the tank would cost $500,000-700,000. Any remaining funds from the project are slated to go back into the city’s water system, or into a telemetry system or Supervisory Control And Data Acquisition. SCADA is a software package positioned on top of a real-time control system to control external processes, while telemetry is a technology that allows the remote measurement and also reporting of information of interest to the system designer.

Hammock reports that the city is 25 years behind in terms of technology in its water infrastructure sector, with officials having to manually check pump stations daily. The upgraded system would allow officials to monitor in real-time from cell phones, computers or tablets.

The mayor adds that he believes the funds will be in city’s possession soon and that all funds must be used by the end of 2024.

A few weeks following the mayor’s announcement regarding the use of federal funds on water tank projects in the area, the Tallassee Tribune issued another report informing residents of the Tallaweka community that upgrade work on the local water tank would be launching in roughly six to eight weeks.

“The elevated water storage tank located behind Advanced Auto Parts, we just finished up the design on it to have it repainted,” CDG Engineers & Associates, Inc. senior project manager Jeff Harrison.

The upgrades are part of the city’s planned capital improvement projects.The city plans to begin the bidding process with expectations to renovate the water tank this summer.

According to Harrison, the structure of the tank is in good shape and most of the needed work is superficial. However, the interior of the tank is reported to require the most upgrades, as the coating has exceeded its lifecycle. For the project, crews will have to sandblast and repaint the entire structure.

Following interior renovations, the exterior of the tank will also be cleaned and have additional overcoats applied.

“The exterior is in pretty good shape,” Harrison said. “There is mildew on it but as far as the coating, it’s in fairly decent shape. We’re going to do what’s called a brush-blast. They will brush it, rough it up and come back with an overcoat on it.”

Coating efforts are expected to start in June.