Last week, the Haskins Bridge, a historic bridge located at Jolly Mill Park near Pierce City, Missouri, collapsed into Capps Creek after a tree had fallen onto the structure.

No injuries were reported as a result of the incident.

Built in 1905, the 95-year-old bridge was constructed by James B. Diver Bridge Co. of Keokuk, Iowa, and was crafted to be a pin-connected, six-panel, Pratt through truss. The bridge spanned 90 feet long and 16 feet wide.

It was moved by horses and erected over Capps Creek in 1926, where it served as a bridge for vehicle traffic for 74 years. 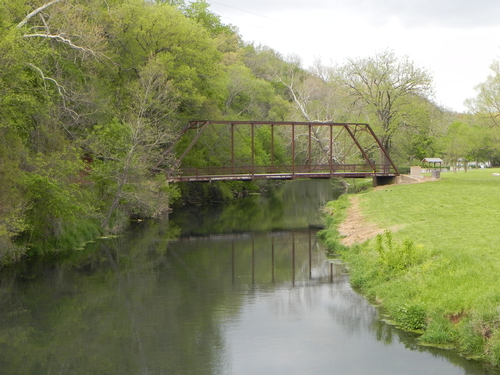 Courtesy of BridgeHunter.com
Last week, the Haskins Bridge, an historic bridge located at Jolly Mill Park near Pierce City, Missouri, collapsed into Capps Creek after a tree had fallen onto the structure.

In 2000, the New Newton County bridge, along with three acres of land, was donated to Jolly Mill Park by the Haskins family—who has lived in the area since 1912. According to KSN, the Jolly Mill launched as a grist mill in 1848 and was named after another local family.

Resident Bob Haskins, who’s family the bridge is named after, recalled his eldest daughter getting married on the structure.

“I’ve watched hundreds, if not thousands of people take pictures on this bridge,” Haskins added.

It was because of the mill’s success that led to the establishment of the town of Jollification in the 1850s. While the town burned during the Civil War, the mill and bridge survived. During the 1870s the town was partially rebuilt. The mill was purchased in 1983 by The Friends of Jolly Mill and listed on the National Register of Historic Places.

It is currently a privately supported recreational facility operated by a board of directors.

According to reports, last Friday (April 16), the historic metal and wooden bridge collapsed after a tree had fallen on the structure. However, due to safety issues, the structure had long been fenced off to foot traffic.

In wake of the collapse, the park has been closed for public safety until park officials can decide on a plan. While they believe that they will try to restore the structure, the Department of Natural Resources has also been notified about the incident due to the rusted metal stuck in the waterway.

The creek is reportedly stocked by the Missouri Department of Conservation and could potentially have a negative effect on the inhabiting wildlife.