The team initially created an ultra-white paint last October, and have been pushing to reformulate it for even “cooler” properties. The team recently published a paper about its findings in the journal ACS Applied Materials & Interfaces.

“If you were to use this paint to cover a roof area of about 1,000 square feet, we estimate that you could get a cooling power of 10 kilowatts. That’s more powerful than the central air conditioners used by most houses,” said Xiulin Ruan, a Purdue professor of mechanical engineering.

The researchers have gone so far as to say that this white is closest thing available to an equivalent of “Vantablack,” which absorbs up to 99.9% of visible light. On the flip side, the new whitest paint reflects up to 98.1% of sunlight, compared to 95.5% in the researchers’ previously developed ultra-white paint. Typically, white coatings expect to reflect 80-90% of sunlight. 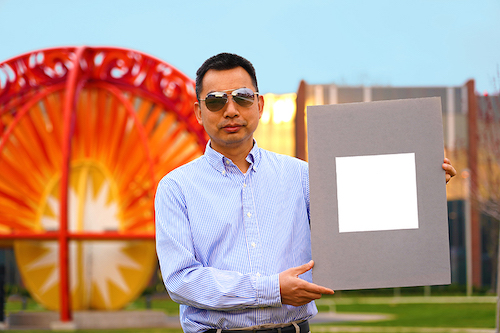 There is one key element on achieving the whitest paint: barium sulfate.

“We looked at various commercial products, basically anything that’s white,” said Xiangyu Li, a postdoctoral researcher at the Massachusetts Institute of Technology, who worked on this project as a Purdue Ph.D. student in Ruan’s lab. “We found that using barium sulfate, you can theoretically make things really, really reflective, which means that they’re really, really white.”

But it’s not just the high concentration of barium sulfate, it’s also that those particles are deliberately different sizes in the paint. How much light each particle scatters is directly dependent on its size, and a wider range of sizes allows the paint to scatter more of the light spectrum.

It’s a fine line to walk, because while the high concentration is important, too much will damage the durability of the paint.

To test the cooling traits of the paint, researchers used thermocouples to demonstrate outdoors that the paint can keep surfaces 19 degrees Fahrenheit cooler than the ambient surroundings at night, and 8 degrees F below their surroundings during high noon. Reportedly, the paint even works in winter climates.

Patent applications for this paint formulation have been filed through the Purdue Research Foundation Office of Technology Commercialization. This research was supported by the Cooling Technologies Research Center at Purdue University and the Air Force Office of Scientific Research through the Defense University Research Instrumentation Program. The research was performed at Purdue’s FLEX Lab and Ray W. Herrick Laboratories and the Birck Nanotechnology Center of Purdue’s Discovery Park.

Last year, an “extremely reflective” white paint developed by UNStudio (Amsterdam, Netherlands) and Monopol Colors (Fislisbach, Switzerland), dubbed “The Coolest White,” was on display for all to see in the “State of Extremes,” in Israel’s Design Museum Holon’s Decennial Exhibition.

First unveiled in March 2019, the paint was created using fluoropolymer technology and has successfully prolonged the lifecycle of urban building and structure coatings to 30 years, according to the firms. In using this new coating, light absorption is limited, reducing the effect of urban heat islands and the need for energy to cool down buildings internally.

The companies named the paint, “The Coolest White,” as part of the increasing trend for architects and designers to consider the environment in their work. With protection against corrosion and Total Solar Reflectance ratings, the paint will eventually help to lead future-proof designs. When tested, on a scale of 1-100, The Coolest White revealed a TSR score of over 80, which is 5-10 above other white-colored paints and 45-65 above dark colors.

“We identified that we were missing this kind of technology in our projects: a technology that could bring a nano-solution; that would be simple yet advanced, social but scientific and that would allow us to contribute in a scalable way to one of today's most pressing issues: climate change,” said Ben van Berkel, principal architect of UNStudio, at the time of the unveiling.

When the impact that humans have regarding climate change was brought to attention by the United Nations Intergovernmental Panel on Climate Change report, geoengineers, architects and designers were inspired to start thinking of ways to circumvent these changes.

“We believe that we are responsible as architects for influencing how we build our environment and that we have to collaborate with other industries to develop technologies that will support a global effort to balance the use of energy and create healthier cites and buildings,” added van Berkel.

In March 2016, another British artist, Anish Kapoor (known for works such as “The Bean” in Chicago), brokered a deal with Surrey Nanosystems, the creator of Vantablack, originally used for military or astronomy equipment, to be the only artist to work with Vantablack.

The art world, including British artist Stuart Semple, was outraged at the exclusivity of the product and Semple set to work making various other paints and pigments including the Pinkest Pink (and other color iterations of the name), color changing paints, a cherry-scented black paint and several other variations of a “blackest black” including the most recent “black hole in a bottle” in 2019.