Through the program and partnership, sailors were recently provided virtual training to operate 3D printing technologies while at sea. The ship’s captain as well as its Chief Engineer Lt. Andrew Bardwell had asked for volunteers to sign up for the additive manufacturing pre-apprenticeship.

During the virtual training, Navy crewmembers were taught to set up, operate and maintain LulzBot 3D printers and learned related computer-aided-design techniques as well as how to operate Artec precision scanning equipment. 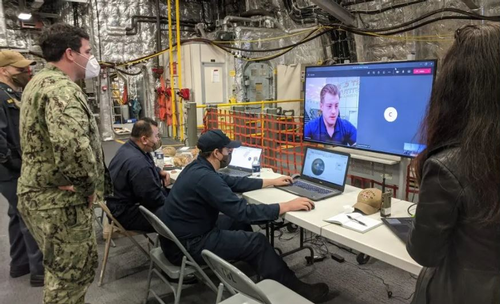 The training was delivered by Morgan Smith, a design engineer based at RCBI Huntington via Zoom. In teaching online some 2,000 miles away, Smith explained to the Navy sailors that before an item can be 3D printed, a drawing must be generated using 3D-modeling software then transferred to the 3D printer, which reads the data to build the item, among other aspects involved in 3D printing operations.

Once at sea, sailors will practice what they’ve learned by 3D printing components used on the ship.

However, the training program isn’t the first time RCBI has delivered 3D printing training to Navy personnel. In 2019, Chris Shaffer, a design engineer based at RCBI Charleston, twice flew to California to train other sailors to use 3D printers as part of RCBI’s Military Advanced Manufacturing Pre-Apprenticeship Program.

“RCBI has been supporting the U.S. Department of Defense for more than 30 years now, developing supply chain links and delivering access to advanced technologies and creative workforce development solutions to meet the critical mission of the military,” said Charlotte Weber, RCBI Director and CEO. “We’re proud to assist the Navy as it utilizes 3D printing technology to overcome logistical supply chain issues during deployments.”

In February, the United States Naval Postgraduate School, a grad institution for Naval officers and others, announced a research collaboration with global print and digital document corporation Xerox.

The Collaborative Research and Development Agreement involves the installation of Xerox’s ElemX Liquid Metal 3D printer—a new name given for the Vader Systems at IMTS that was acquired by Xerox in 2019—on the university’s campus to research the potential of 3D printed aluminum components and how additive manufacturing can develop new capabilities for the U.S. Navy and Marine Corps.

Additionally, the team will research how the technology could be utilized at sea, as well as examine novel approaches to designing, creating, and prototyping with the ElemX 3D printer.

Measuring 9 feet wide and 7 feet tall, the 3D Xerox printer can reach internal temperatures of more than 1,500 degrees Fahrenheit and can produce bespoke metal components using aluminum wire as its base material.

Starting with a spool of aluminum wire, Tali Rosman, Vice President and General Manager for 3D printing at Xerox, explained that to create an aluminum part, the wire is melted and while in liquid form, droplets are jetted one drop at a time in order to create layers and build the desired part.

Currently, the printer can create parts that have a maximum volume of roughly 12 inches by 12 inches by 15 inches, with completion times varying based on the part’s size. For decent-sized parts, the machine has been reported to complete printing efforts between three and four hours.

Rosman further explained to Popular Science that while traditionally 3D printers require powders, they pose an explosion risk and breathing hazards, suggesting that aluminum wire is not only a better, but safer fit for a Naval ship’s tight environments.

However, even with the material selected, Gunduz adds that NPS researchers will still have to observe other considerations such as vibrations and shaking before the technology could be installed aboard a vessel.

If all goes well, retired US Marine Corps Colonel and Vice President of the NPS Alumni Association and Foundation, Todd Lyons predicts that the technology will reduce dependency on global supply chains and provide cost benefits over traditional manufacturing.

The CRADA underway between Xerox and NPS is just another step in adopting 3D printing technologies in the U.S. Military.