The March issue of the Journal of Protective Coatings & Linings is now online, available through options including an interactive digital edition, a full complement of web content and downloadable PDF.

The special commemorative issue covers the 37-year relationship between JPCL and SSPC (now part of the Association for Materials Protection and Performance) and celebrates the partnership that changed the coatings industry forever. In every issue since 1984, JPCL has published the words of top thinkers who have generously shared their wisdom, intellect and experiences to continually educate the coatings community and collectively move the industry forward.

Continuing to inform its readers, JPCL starts off with a special message from TPC CEO Brion Palmer, reminding those that JPCL will officially become independent of SSPC (AMPP) effective with next month’s April 2021 issue. 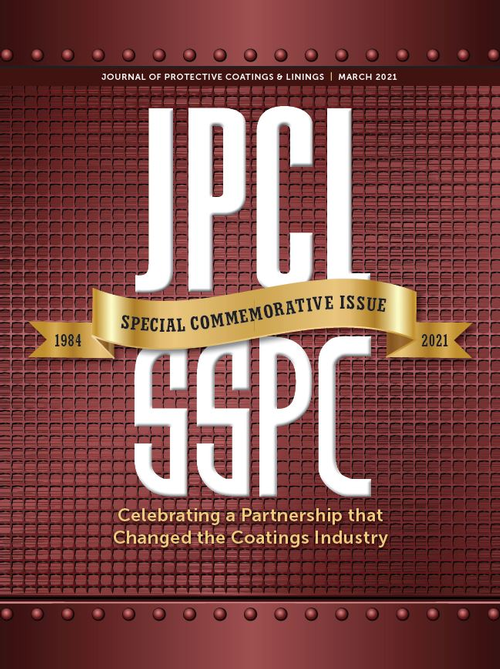 
In his message, Palmer reports that moving forward, JPCL will continue its critically important mission to educate and provide vital information to the protective and marine coatings industry—not as the Voice of SSPC, but as the Independent Voice of the Industry.

Following Palmer’s message to SSPC organizational members and JPCL readers, Founder of JPCL Harold Hower, reflects on how the magazine evolved from the association. In his article, Hower covers his own journey from being hired to assist SSPC—then known as the Steel Structures Painting Council—up to the inaugural issue of JPCL and beyond.

Continuing to the features, the commemorative issue kicks off with, “Looking Back Before Moving Forward.” The article dives into an industry timeline, comparing the state of the coatings industry when JPCL was established in 1984 to where it is now. Though some things may look familiar, the changes in standards and regulations, coatings formulation, equipment and the organizational structure of SSPC are undeniable. This industry timeline presents some of the major events to have taken place over the duration of the JPCL-SSPC partnership.

The following feature, “Then and Now: Where Have All the Paint Companies Gone?” by Brian Goldie, Technical Editor, JPCL (with apologies, again, to Pete Seeger)* touches on a similar article that was originally published in the November 2010 issue of JPCL (hence the second apology). In his article, Goldie notes on the early days of JPCL and SSPC and how they were marked by a period of drastic industry consolidation. Previously, in 2010, JPCL took stock of the shrinking number of players in the global coatings market due to mergers and acquisitions. This update brings readers up to date on ongoing coatings industry consolidation.

In bringing the industry up to speed with mergers and acquisitions over the years, JPCL also highlights its own archives, which contain hundreds of articles related to protective and marine coatings and serve as the industry’s historical record in “Opening the Archives: Changes in Technology and Techniques Reflected in JPCL.” Specifically, the article revisits archived JPCL content to provide a review of major industry developments in oil and gas coatings, surface preparation tools and techniques, and coatings for marine and Navy vessels.

Finally, the commemorative issue closes with “More Than a Magazine,” where industry influencers reflect on rich JPCL, SSPC history. For the feature, JPCL reached out to some longtime coatings industry veterans to get their thoughts about the JPCL-SSPC partnership, how the content published in JPCL has helped them in their careers, what business and industry changes they’ve seen throughout that time that have been covered in-depth in JPCL’s pages, and what they’d like to see covered in the revitalized JPCL moving forward.

Following the release of the March issue, the magazine will be added to the JPCL Archive—containing 25 years of JPCL digital issues dating back to 1996—which covers a priceless collection of evergreen information, solutions to real-life problems, case studies, insight from experts and a historical record of the industry.

The JPCL Archive is only available to current subscribers. As aforementioned, JPCL will debut as the Independent Voice of the Industry with its April 2021 issue, complete with a new look, subscription offers and benefits. The April issue also plans to announce the 2020 Readers’ Choice Awards.

The entire JPCL team is excited about the magazine’s expanded role and believes its independence will make the magazine an even more valued resource to the industry; however, JPCL staff wishes to remind readers that this change affects not only individual SSPC members, but companies that have been organizational members of SSPC.

Until this month, a top benefit for SSPC organizational members had been a complimentary JPCL monthly subscription for each employee on the company’s member roster. Now, whether you renewed your SSPC membership before the finalized merger or joined AMPP after, JPCL is no longer an association member benefit.

To mediate these changes, a special subscription rate is currently being offered to all new subscribers until today (March 31).