Researchers from the University of Newcastle School of Engineering have reported that they’ve begun developing a new drone technology to help predict what areas and specific pipes are at risk of water loss through corrosion.

While the risk of degradation is traditionally dependent on an underground water supply network’s age and the amount of moisture in the ground surrounding the infrastructure, more recently, sensor devices have been deployed at specific sites to measure water flow to indicate leaks or breaks.

Associate Professor In-Young Yeo and Professor Rob Melchers, from the University of Newcastle School of Engineering, along with PhD student David Bretreger, are now developing and testing a new technique to add to the industry’s leak detection ‘toolbox’.

The technique utilizes a Light Detection and Ranging sensor, commonly referred to as LiDAR, which is a remote sensing method that uses a pulsed laser to measure ranges and variable distances to the Earth. From the differences collected in laser return times and wavelengths, the data can then be used to make digital 3D-representations of the landscape and indicate the amount of water in the ground.

“By attaching a device called a LiDAR to a drone we can accurately see where the lower lying areas are and, where land is not covered by buildings or concrete, we can also tell how wet the ground is,” said Yeo. 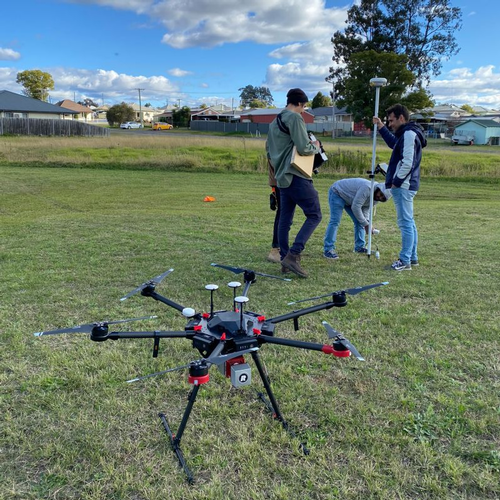 The LiDAR drone technology research headed by University of Newcastle investigates soil moisture and corrosion and is part of a larger innovative smart water management project coordinated by NSW Smart Sensing Network (NSSN) and is led by Sydney Water.

Sydney Water is comprised of a network of over 22,000 kilometers of water pipes, and it looking to further protect its assets. As a result of current leak detection programs, Sydney Water has reportedly reduced water loss by about 30 billion liters per year. With the intent to further condition assessments and pipe failure predictions, Sydney Water, NSSN, Hunter Water and several other water utilities have teamed up with the University of Newcastle and other universities in NSW and ACT, to develop technologies to assess the condition of water supply networks.

“Our research promises to inform corrosion assessments of aging infrastructure, allowing targeting of maintenance and replacements and preventing expensive and disruptive breaks and leaks,” said Yeo. “We know this technique works so we are now looking to increase the accuracy of wetness detection and we’re investigating automation to enable observation of even larger areas.”

Looking to the future of this technology, Yeo sees these emerging techniques being used beyond assessing the state of water infrastructure to such applications as monitoring wetlands and managing irrigation.

While the use of LiDAR in the water and wastewater industry continues to be new avenue for the developing technology, the infrastructure industry has been working to employ the technology in other ways as well.

In 2019, researchers from the University of Waterloo were reportedly working on developing a more reliable robotic inspection technology that could reduce the cost of bridge inspections.

Individually programmed with inspection plans and location focus areas per bridge inspection, the robots consist of six five-megapixel cameras able to create a 360-degree view mounted on an autonomous ground vehicle. In addition to the cameras, the robots also used LiDAR to collect data on present defects and makes an analysis of the inspected findings.

Sriram Narasimhan, an engineering professor at Waterloo, Canada Research Chair in Smart Infrastructure and Director of the Structural Dynamics Identification and Control Laboratory, also added that current inspection practices are subjective and often imprecise, at least in part, due to educated guesswork, among other reasons.

Additionally, the data recorded on the same bridge or structure can be cross-examined with previous inspection results, creating a display of key vulnerable areas. The university reported that the same software could even be used for inspections of water-based vehicles, drones, nuclear power plants, buildings, and other infrastructure.

At the time, the researchers were working to develop a water-borne inspection platform and artificial algorithms. The new system aimed to automatically detect and identify certain defects. In the future, the team hopes that the analysis of data collected will be able to more accurately assess structural integrity and forecast future repairs.

A paper on the research, “Automating Data Collection for Robotic Bridge Inspections,” has since been published in the Journal of Bridge Engineering.

In September 2019, the Department of Energy’s Blade Reliability Collaborative and Sandia National Laboratory were reported to be researching how to noninvasively inspect wind turbine blades for visible and hidden damages in a faster, more detailed way then traditional human inspections with cameras.

Once properly developed, flying and crawling robots or drones would be outfitted with special scanners that would aid in lowering the cost of wind energy at a time when blades are being more produced, larger in size, harder to transport and, not to mention, pricier.

One solution to quicker and more reliable wind blade inspections that researchers had been working on involved outfitting a crawling robot with a scanner that’s capable of viewing damage located inside a wind blade. In another set of projects, the team has paired drones with sensors that use heat from sunlight to detect a blade’s damages.

The technology was inspired by machines more commonly used for dam inspections, allowing a robot to move up and down, as well as from side-to-side on a wind blade. While in motion, the attached cameras take a series of photos that are then matched together, forming a high-fidelity image of the blade. From the images, inspectors can then locate any small demarcations, as well as subsurface and surface damage.

As for the drone solution, more commonly known as thermography, uses infrared cameras that use the sunlight’s heat to detect hidden damages as well. This technology is reported to detect damages up to a half-inch deep within the blade.

In another study, like the crawling robot, a drone was also equipped with a LiDAR sensor and took images while it moved, ultimately gathering a super-resolution image. Reportedly, the imaging helps researchers to precisely track where a blade is damaged and measures erosion found on the blade’s edges.

Last year, United States Navy began exploring the use of a new digital software to help combat shipboard repairs and maintenance services. Called a “digital twin,” the technology is reportedly comprised of IT networks where maintenance engineers located at surface warfare centers can identify damage, corrosion, and alignment issues more quickly. The practice aids crews in being more proactive about the vessel’s maintenance prior to docking at the port.

The project was part NSWC’s Naval Innovative Science and Engineering research on technologies that can advance the future of in-service engineering. The Federal Technology Transfer Act of 1986 allows warfare centers and research laboratories to collaborate with industry and academic in research, engineering and technology development.

In June, a group of middle-school students from Downtown Doral Charter Upper School in Doral, Florida, was named one of five National Winners in the 10th-Annual Samsung Solve for Tomorrow Contest.

For their project, sixth-grade students Alyssa Neuber, Bianca Verri and Jose Pirela, along with their science teacher, Rebeca Martinez, all from Downtown Doral Charter Upper School, crafted a device to warn city workers when and where there is flood danger.

The students chose this real-life community issue as Doral, Florida, often experiences large amounts of precipitation, especially during summer and hurricane season, leading to floods and other issues.

According to reports, the students crafted a device that detects sediment build-up, sediment density and shares that information in real-time with local officials when structures need immediate cleaning and maintenance.

The device uses LiDAR, which is capable of being attached to storm and manhole drains.

In the project, each student possessed a specific task: Pirela focused on problem solving and coding, Neuber worked on cost calculations and Verri studied how lidar would work. Class parents who are employed engineers and website coders also aided in the project.