A recently proposed bill in Massachusetts would make the state the latest in to require solar roofs on new residential and commercial buildings. The Solar Neighborhoods Act was reportedly filed at the beginning of the month, with a companion bill filed in the Senate.

“I am honored to be working with Environment Massachusetts, Sen. Jamie Eldridge, and Rep. Mike Connolly on this important piece of legislation,” said state Rep. Jack Lewis.

“We must accelerate our transition to renewable resources in order to decrease carbon emissions, fight climate change, and save consumers money. Modeled after similar policies in California and the town of Watertown, this bill would be also be a dramatic investment in good-paying green energy jobs.” 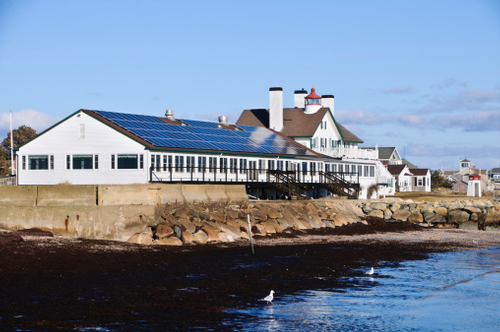 KenWiedemann / Getty Images
A recently proposed bill in Massachusetts would make the state the latest in to require solar roofs on new residential and commercial buildings. The Solar Neighborhoods Act was reportedly filed at the beginning of the month, with a companion bill filed in the Senate.

In the last session, the Joint Committee on Telecommunications, Utilities, and Energy was favorable to the legislation, but has yet to advance it to a vote on the floor of either chamber.

While Boston has its own requirements, the Massachusetts bill is reportedly modeled after regulations in California— at the end of 2018, California’s Building Standards Commission gave the final approval for codes that mandate the requirement for solar panels on new homes making it the first state to have such a rule. Those rules went into effect last year.

Also in 2018, Denver passed its Green Roof Initiative, which not only requires new, large buildings to be constructed with green roofs, but also requires buildings of a certain size to install a green roof when the current one is up for replacement.

In April 2019, New York City council approved a package of bills and resolutions—known as the Climate Mobilization Act—intended for radical energy efficient improvements. The act requires that all new residential and commercial buildings in the city have green roofs made up of either plants, solar panels or small wind turbines—or a combination of all three.

Also in 2019, Nebraska updated the state’s energy codes for residential and commercial buildings for the first significant time in a decade, taking cues from both Boston and Ontario, which updated their regulations to get new construction as close to net zero as possible.

The mandate sets energy usage requirements for commercial, institutional, municipal and multi-family buildings that are 50,000 square feet or larger.