The Concrete Foundations Association recently announced that it is leading the charge of an industry-wide effort to mitigate the pending shortage of steel form ties. According to the association, the shortage of the ties is not only reducing production capacity for contractors but is threatening shutdowns in residential and commercial construction.

“This shortage has evolved over the past two quarters into a significant industry issue. The record level of housing starts in 2020 has combined with significant factors such as purchasing practices, raw material depletion and tariffs on imports as well as the pandemic’s impact on both shipping and manufacturing,” said James Baty, Executive Director of the CFA.

According to CFA, aluminum handset systems account for an estimated 70% of all residential cast-in-place concrete foundations including crawl spaces and full-height living space basements.

“Form ties are the most essential component of the cast-in-place concrete forming industry as they must be designed to handle the rigorous pressures and permit the rapid construction schedule that has long been an advantage of this method,” said Jason Ells, Senior Vice President for Custom Concrete, a concrete contractor from Westfield, Indiana.

“We have been feeling the impact of this shortage for several months now and can see that it stretches from raw material and imports through manufacturing and into the marketplace through supply to companies like ours.  We have yet to find any relief or projected relief for the situation before it gets even worse.” 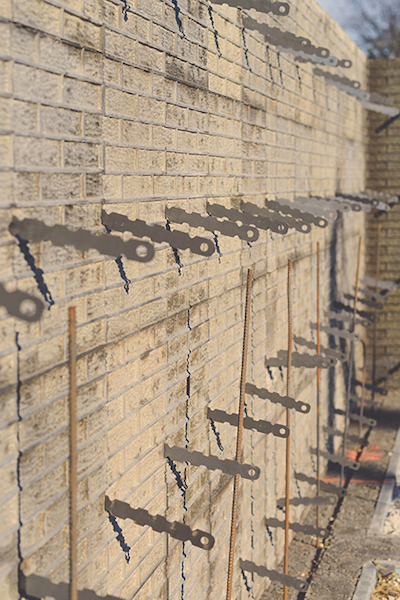 Concrete Foundations Association
The Concrete Foundations Association recently announced that it is leading the charge of an industry-wide effort to mitigate the pending shortage of steel form ties. According to the association, the shortage of the ties is not only reducing production capacity for contractors but is threatening shutdowns in residential and commercial construction.

In response, the CFA says it has developed a coalition of industry stakeholders including the National Association of Home Builders to gather information related to the situation, as well as to begin identifying possible solutions.

Baty said that some key concerns are making sure that shortcuts aren’t taken in the building process to account for the shortage, such as using fewer ties or trying alternative systems that aren’t tested for specific loads.

“Future meetings are planned for updating those with specific interest in monitoring the progress and to continue bringing the right minds together to do what we can to solve this problem,” said Baty. “In addition to our attention on supply, we also are working to educate the marketplace of the safety risks that must be considered when attempting to stretch inventories by reducing tie usage or attempting untested or provisional replacements.”

A data analysis last month from both the NAHB and the Associated General Contractors of America showed price hikes for materials that are reaching record-setting levels and heavily burdening firms.

On the residential side, the NAHB says that stronger buyer demand has helped boost builder confidence and therefore offset these supply chain challenges, according to its analysis with the Wells Fargo Housing Market Index.

However, the AGC says that some other sectors are facing massive hardship and the organization is calling on the Biden administration to review and rescind a range of trade tariffs.

NAHB Chief Economist Robert Dietz echoes much of that, recognizing the steadily rising prices and falling inventories, though the residential building sector has had a stronger bounce  from the COVID-19 pandemic.

“Lumber prices have been steadily rising this year and hit a record high in mid-February, adding thousands of dollars to the cost of a new home and causing some builders to abruptly halt projects at a time when inventories are already at all-time lows,” said NAHB Chairman Chuck Fowke, a custom home builder from Tampa, Florida. “Builders remain very focused on regulatory and other policy issues that could price out households seeking new homes in a tight market this year.”

The data shows that there not only has been a steady decline of bid prices since the beginning of the pandemic, but those numbers really jumped after April. According to the AGC, the index that measures the selling price for materials and services used in new nonresidential construction increased 2.5% from December to January and 10.7% since April.

Meanwhile, the producer price index for new nonresidential construction—a measure of what contractors say they would charge to erect five types of nonresidential buildings—increased only 0.2% over both the latest month and the nine months since April.

The AGC recognizes that there are a range of reasons to account for the price spikes, but is urging the Biden administration to rescind some tariffs for relief, saying that they could undermine the economic recovery of the sector.

At the beginning of this year, the “Buy American” policies initially set forth by former President Donald J. Trump got a boost as President Joe Biden signed an executive order aiming at increasing government purchases of American-made products.

The new order mainly reinforces the government procurement and procedure rules, making it harder for federal agencies to purchase imported products or to get an exception to the Buy American rule. In his comments, Biden noted that in 2018 alone, the Defense Department spent $3 billion on foreign construction contracts, “leaving American steel and iron out in the cold.”

Around the same time, a group of several domestic steel industry associations wrote to President Joe Biden, urging him to keep steel tariffs and quotas that were set in place by the Trump administration.