Scientists from the Helmholtz Centre for Materials and Coastal Research in Geesthacht, Germany, have recently developed a magnesium alloy that has an elevated resistance to corrosion.

The alloy is reported to have a lower corrosion rate compared to ultra-high-purity magnesium, which the scientists claim approaches stainless magnesium through alloying pure magnesium with tiny amounts of calcium.

“Our magnesium–calcium alloys were prepared by conventional casting processes,” explained Min Deng from the Helmholtz Centre for Materials and Coastal Research in Geesthacht. “Pure magnesium and pure calcium were melted at high temperatures in a steel crucible. Then, the melt was poured into a steel mold. After cooling to room temperature, the alloys were ready for use.” 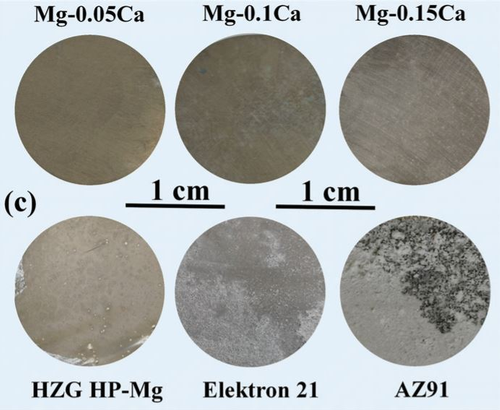 "Approaching 'stainless magnesium' by Ca micro-alloying" via Materials Horizons
Scientists from the Helmholtz Centre for Materials and Coastal Research in Geesthacht, Germany, have recently developed a magnesium alloy that has an elevated resistance to corrosion.

According to Chemistry World, magnesium is widely used in the automotive, aerospace, electronics, biomedical and energy-storage industries for its low weight, durability, abundance of material and electrochemical properties. Lighter than aluminum, magnesium’s weight and sustainability can help to reduce fuel consumption and carbon dioxide emissions. Traditionally, magnesium is coated or alloyed with elements such as lithium, aluminum or arsenic to fight corrosion.

However, when used at an industrial level, the magnesium still tends to corrode more quickly when placed in an aqueous environment.

To fight these issues, a team of scientists have added tiny amounts of calcium to the magnesium alloy, careful to retain the material’s purity. The calcium reduces the cathodic water reduction kinetics, which in turn makes the magnesium more resistant to corrosion and allows for the development of a protective surface film. The calcium additive is also reported to stabilize impurities (such as iron and silicon) within the alloy.

“Compared to existing alloying [compositions], the addition of calcium broadens the practical applications of magnesium alloys an implant material, since calcium is harmless to the human body,” said Linqian Wang, a member of the Helmholtz team. “Previous attempts to develop high corrosion-resistant magnesium alloys have always involved delicate and complicated processes. In comparison, the processing route for [our] magnesium–calcium alloy with [its] superior performance is quite simple, eco-efficient and economical.”

On the resulted material, Polina Volovitch, who studies corrosion at Chimie ParisTech in France noted that the alloy could have “biomedical applications, such as scaffolds and implants, because it seems to reduce significantly the formation of hydrogen bubbles, [which are] common in existing magnesium implant materials, [and] the formed corrosion products are not expected to be toxic.”

Nick Birbilis, who specializes in material sustainability and corrosion science at the Australian National University chimed in, saying, “Practical applications of stainless magnesium are many and varied. Certainly portable electronics come to mind, but as a wonder material, the world is magnesium’s oyster.

“Steel came before skyscrapers, so let’s see what magnesium will bring us.”

The study has since been published in the journal, Materials Horzons.

Magnesium Alloys in the Coatings Industry

Back in 2018, Allen Zielnik from Atlas Material Testing Technology wrote a blog for PaintSquare Daily News entitled, “Different Forms of Corrosion Require Various Coatings Systems.” In his blog, Zielnik notes that in relation to cathodic protection, magnesium and aluminum alloys are commonly used as sacrificial anodes in some coatings, where are zinc chromate is often used as a pigment in primers as it reacts with rust and passivates the surface.

However, zinc and magnesium powders are also used for this, typically at PVC of around 65%-90% loading, and the primer binder is often epoxy or alkyd based. As epoxy is not UV-resistant, tending to yellow and chalk in one to two years, other binders are used for the finish coats.

Since a reaction between two different metals can offer corrosion protection, cathodic protection uses a sacrificial electron donor, the anode. The difference in potential between the two metals means the sacrificial anode material corrodes in preference to the substrate. This effectively stops the oxidation reactions on the protected metal.

Although, polyurethane binders also form very good corrosion-resistant coatings, are not affected by UV and are often preferred for exterior application topcoats over epoxy primers for architectural protection.

In the year prior, Junren Lin, who graduated from North Dakota State University in December with her doctorate, presented her research on “Mg Rich Primer-Powder Topcoat Coating System for the Corrosion Protection of Al Alloys” at the annual Poster Sessions presentations at SSPC.

By combining the two systems to develop a new system, she said, the MgRP-powder topcoat coating system would deliver the cathodic protection effect from MgRP and the barrier protection from powder topcoat to achieve superior corrosion protection.

Lin ran stability tests to determine whether the MgRP could withstand the high temperature needed for curing of powder topcoat, and tested the adhesion strength of the new system. Additionally, accelerated weathering tests were used to determine the system’s corrosion protection effects.

Her research showed that the combined coating system provided a much longer corrosion protection time to aluminum substrates than the powder coat by itself, without compromising other coating properties.

Finally, she found a very similar appearance when comparing the gloss value of the four systems, meaning that the MgRP will not vary the topcoat appearance.

In 2016, a team of materials science researchers at the University of Virginia identified a magnesium-rich primer—used as part of a normal paint system—as a promising candidate to replace chromate-based paint systems that protect aluminum alloys.

“Several long-term studies, and some conducted in severe, natural environments, have demonstrated the primer’s excellent corrosion resistance,” said John Scully, professor of materials science and engineering at UVA at the time.

Scully led a team of graduate-level researchers investigating the primer’s effectiveness. The team’s research benefitted from funding provided by the U.S. Department of Defense Corrosion Policy and Oversight Office under the aegis of the Technical Corrosion Collaboration.

With support from the TCC program, three UVA materials science and engineering students studied the magnesium-rich primer for several years, beginning when Andrew King (who earned his doctorate in 2014) kicked off the project in 2008. Balaji Kannan, a Ph.D. candidate, helped further the research starting in 2011, followed by R.J. Santucci, a Ph.D. candidate who joined the team in 2014.

UVA researchers also confirmed independent natural environment studies that demonstrated that the magnesium-rich primer provided excellent corrosion protection with a wide range of pretreatments, and also evinces little adverse effect on corrosion protection after two and a half years of exposure, even when the primer was used in conjunction with different types of military-grade topcoats.

This conclusion has been extended to such systems that have been exposed in a severe natural environment for years, and then scribed, followed by extended exposure.

And almost a decade ago, Australian materials engineers from Monash University found that adding arsenic to lightweight metal magnesium dramatically reduces the metal's corrosion rate. The arsenic acts as a cathodic "poison" that retards the corrosion reaction, said the team, led by Nick Birbilis, an associate professor of materials engineering.

When employed the article reported that the cathodic poisoning resulted in 10 times less hydrogen evolving during corrosion. Birbilis added that the discovery would open the way to more research in creating 'stainless' magnesium products by exploiting other cathodic poisons.

At the time, the team was working with Australia's national science agency, the Commonwealth Scientific and Industrial Research Organization and the University of Wales. Their research, “Poisoning the corrosion of magnesium,” was published in the journal Electrochemistry Communications.