Late last week, New York Gov. Andrew Cuomo issued a Request for Proposals to develop one of the last available vacant parcels in Manhattan’s West Side. The site, known as Site K, is a 1.2-acre lot across from the Javits Convention Center.

The lot is owned by the New York Convention Center Development Corporation, a subsidiary of Empire State Development, and is part of a broader 2021 city development plan that was released in January.

“From the opening of Moynihan Train Hall to the High Line expansion, we are creating a vibrant, transit-oriented Midtown West that is designed to fuel significant economic growth as we restart our state's economy,” Cuomo said. “Site K will bring even more opportunities to this flourishing New York neighborhood, with improved transit, new outdoor spaces and affordable housing opportunities - a true testament to our commitment to build back better.” 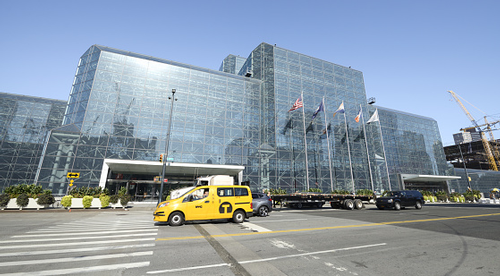 Lisa-Blue / Getty Images
Late last week, New York Gov. Andrew Cuomo issued a Request for Proposals to develop one of the last available vacant parcels in Manhattan’s West Side. The site, known as Site K, is a 1.2-acre lot across from the Javits Convention Center (above).

The RFP is for a commercial or mixed-use development and can include hotels or any other uses that are complementary to the Javits Center. Should the proposal include residential use, however, it must include 30% permanently affordable units to comply with the Affordable New York Program.

Submissions are due by 2 p.m. EST, May 6. More information can be found on the Empire State Development website, here.

As Cuomo stated in his press release, the project is near the Javits Center, which is undergoing its own $1.5 million expansion, as well as the recently opened Moynihan Train Hall.

That $1.6 billion project that’s part of a larger effort of work on the historic Penn Station. The 255,000-square-foot hall is a transformation of the James A. Farley Post Office Building and has increased Penn Station’s concourse space by 50%.

Cuomo praised the project when it opened at the beginning of the year for its completion during the COVID-19 pandemic. The project was led by Empire State Development through a public-private partnership with Vornado Realty Trust, The Related Companies, Skanska, the MTA, the Long Island Rail Road, Amtrak and the Port Authority of New York and New Jersey.

Designed by Skidmore, Owings & Merrill, the concourse provides access to 17 of the station's 21 tracks. One of the main design elements is the reuse of the three original 150-foot-long steel trusses. A steel box beam was added so that the framing could be removed for the installation of several skylights, a focal point of the hall. Ceiling murals are also present above the 31st and 33rd street entrances.

Reportedly, there are more portions of the Farley building that are under renovation that are slated to open to the public later this year.

Though NYC is taking on many macro projects, the Moynihan entrance work was not without its blunders. Work was announced in September 2016 with crews beginning the next year.

Construction began with a restoration of the post office’s facade, including its 700 windows, copper roof, steel trusses and terra-cotta cornices.

However, just last summer, a report from Amtrak revealed that its part of the train hall project was delayed and over budget, calling the December opening deadline into question.

At the time, Amtrak said that certain functions that might not be online by December include passenger information displays or other station operations, which might not be available until March of next year. The company attributed the delays and costs to “lack of oversight and insufficient experiences from staff.”

As recently as June (with only six months left in the initial schedule) Amtrak said that the program team did not have reliable planning or management. However, city officials were quick to point out that Amtrak was only one piece of the puzzle, and the project did end up opening on time.