Engineers Give US Infrastructure a C-

While infrastructure has been a major topic in the United States in relation to rebuilding the economy because of the ongoing COVID-19 pandemic, the American Society of Civil Engineers recently released its 2021 Infrastructure Report Card, revealing a mediocre, but passing grade.

The ASCE, which issues the report every four years, gave the nation a C- for the condition and performance of its infrastructure, a slight improvement from the 2017 report.

“For the first time in 20 years, our infrastructure GPA is a C-, up from a D+ in 2017. This is good news and an indication we’re headed in the right direction, but a lot of work remains,” wrote the ASCE. 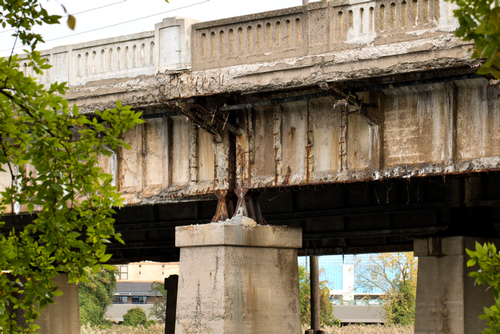 Johnrob / GettyImages
While infrastructure has been a major topic in the United States in relation to rebuilding the economy because of the ongoing coronavirus pandemic, the American Society of Civil Engineers recently released its 2021 Infrastructure Report Card, revealing a mediocre, but passing grade.

In analyzing the data collected, ASCE noted on three trends experienced across all 17 categories:

“America’s infrastructure is not functioning as it should, and families are losing thousands of dollars a year in disposable income as a result of cities having to fix potholes, people getting stuck in traffic or due to repairs when a water line breaks or the energy grid goes down,” said Greg DiLoreto, one of the group’s past presidents. “It’s critical we take action now.”

In expanding on the nation’s bridges specifically, of the more than 617,000, 7.5% are considered structurally deficient and nearly 42% are at least 50 years old. The ASCE also estimates that the nation’s backlog of bridge repair requires $125 billion. Additional estimates revealed that spending on bridge rehabilitation would need to increase from the current $14.4 billion annually to $22.7 billion annually, or by 58%, if conditions are to improve.

Looking at roads in the report, the D grade hadn’t changed since 2017, but notes that 43% of public roadways are in poor or mediocre condition.

Rail is the high point of the report, boasting a B grade, also unchanged from 2017. In 2018, the nation reportedly spent $24.9 billion on rail projects, averaging over $260,000 per mile. In addition to those numbers, Amtrak was reported to have spent $713 million between 2017-19 on state-of-good-repair projects.

Drinking water’s grade improved slightly from a D to a C- as well, noting that while America’s drinking water remains largely of high quality, the systems are aging and underfunded. The report also points out that by 2019, utilities were replacing between 1%-4.8% of pipelines per year on average. However, it was also estimated that more than 12,000 miles of water pipes were planned to be replaced by drinking water utilities across the country in 2020.

Wastewater infrastructure was another sector to flatline, keeping the D+ rating it received in 2017. Estimates indicate that utilities spent over $3 billion in 2019, or more than $18 per wastewater customer to replace the almost 4,700 miles of pipeline nationwide.

“This report card is a warning and a call to action,” Transportation Secretary Pete Buttigieg told The Associated Press. “A generation of disinvestment is catching up to us, and we must choose whether to allow our global competitors to pull ahead permanently, or to invest in the safety, equity, resilience and economic strength that superior infrastructure can bring to Americans.”

During his campaign, President Joe Biden released his transition team’s plan regarding climate change and highlighted the incoming administration’s early priorities. Overall, Biden intends to dedicate $1.7 trillion to overhaul energy, transportation, agriculture, and other sectors. According to the transition document, the team will go beyond just recommitting the nation to the Paris Agreement on climate change, and aims to build a more resilient, sustainable economy through the creation of union jobs within these new investments.

The following month, Biden announced his nomination of Buttigieg to serve as the 19th Secretary for the United States Department of Transportation. Buttigieg was a 2020 presidential candidate and the former Mayor of South Bend, Indiana. He is the first openly gay major presidential candidate in American history, and one of the youngest ever to win a state primary or caucus.

First elected when he was only 29, the South Bend native worked inclusively and creatively to bring together public, private and community leaders to restore pride to South Bend and turn what was once known as a “dying city” into a hub of innovation and job growth. Buttigeig was South Bend’s 32nd mayor and served an eight-year term.

Additionally, Buttigeig was an intelligence officer in the United States Navy Reserve who was deployed to Afghanistan in 2014, eventually earning the rank of Lieutenant. Buttigieg graduated from Harvard University and was a Rhodes Scholar at Oxford University.

During his campaign, Buttigieg unveiled a $1 trillion infrastructure plan that pledged to direct federal funds to state and local governments to revitalize the nation’s transport networks, clean the water supply and expand the broadband internet. Specifically, the plan reforms the capital gains tax, repeals the 2017 GOP tax overhaul and raises estate tax, with a top rate of 65% for billionaires.

At the time, members from the American Society of Civil Engineers were reported to be optimistic over its assessment of the new secretary.

In January, Buttigieg  presented his infrastructure plans to the Senate Commerce, Science and Transportation Committee. According to reports, Buttigieg was received favorably by lawmakers from both parties as he outlined his vision for infrastructure reform should he be confirmed as transportation secretary. During the hearing, Buttigieg noted that there was a “generational opportunity” awaiting the nation’s infrastructure.

However, reports indicate that these tasks will not be easy as the new secretary will also have to adopt myriad measures upon taking office, including implementation of COVID-19 legislation as well as infrastructure investment, promoting transportation safety, further advancing transportation innovation, including autonomous vehicles and drones, and building upon U.S. transportation networks such as restoring Amtrak service along the Gulf Coast where it was halted after Hurricane Katrina some 15 years ago.

In response to these challenges and focusing on safety, Buttigieg voiced his plans, saying that, “We have to ensure that all of our transportation systems, our aviation and public transit, our railways, roads, ports, our waterways and pipelines, all of it is managed safely in this critical period as we work to defeat the virus for good. We also have a lot of work to do to improve the infrastructure in this country, a mission that will not only keep more people safe, it will grow our economy as we look to the future.”

In addition to the challenges the pandemic creates, Buttigieg also plans to integrate climate resilience, work with U.S. manufacturers to increase the rollout and take-up of electric vehicles, both personal and public transit, as well as expanding the network of charging stations, and pledged to make aviation manufacturing and safety a priority.

Most recently, last month, the U.S. Department of Transportation announced that it was officially seeking applicants for its Fiscal Year 2021 round of the Infrastructure for Rebuilding America (INFRA) discretionary grant program.

The competitive program allots approximately $889 million in funding and includes some new criteria for states, cities and other applicants, made by the Biden administration.

Traditionally, the grant program works by utilizing select criteria to promote projects with national and regional economic vitality goals while leveraging non-federal funding to increase the total investment by state, local and private partners. Eligible projects would include highway freight corridors on the National Highway Freight Network, highway or bridge projects on the National Highway System and projects expected to increase capacity on Interstates and other intermodal or rail projects.

However, while supporting the economic vitality at national and regional levels is the USDOT’s top propriety, this year the Department is also seeking INFRA projects that address climate change and environmental justice. Project applications are slated to be evaluated on support strategies to reduce greenhouse gas emissions as well as whether they were planned as part of a comprehensive strategy to address climate change.

Projects will also be rated on the extent that they apply innovative technology, delivery, or financing methods with proven outcomes to deliver projects in a cost-effective manner.

In addition, the Biden administration has added that applications will also be considered based on racial equity, to the extent that project sponsors have completed equity-focused community outreach, and projects are designed to improve connections to underserved communities to reduce barriers to opportunity. The Department will also consider whether the project is located in a federally designated community development zone, including qualified Opportunity Zones, Empowerment Zones, Promise Zones, or Choice Neighborhoods.

These types of projects are also suggested to be positioned to proceed quickly to the construction phase where project costs may include reconstruction, rehabilitation, acquisition of property (including land related to the project and improvements to the land), environmental mitigation, construction contingencies, equipment acquisition and operational improvements directly related to system performance. The projects should also have local sponsors significantly invested.

The Department plans to award both small and large projects this year, with at least $25 million awarded per large project and a minimum $5 million in grants per small project award. Under statutory requirements, 10% of available funds are reserved for small projects, and at least 25% of funding must be awarded to rural projects.

A final change this year, the Notice of Funding Opportunity also highlights the creation of the “INFRA Extra” Program, which will identify competitive INFRA applicants who do not receive an INFRA award and authorize them to seek a Transportation Infrastructure Finance and Innovation Act of 1998 (TIFIA) loan up to 49% of their project cost.

The NOFO will remain open through March 19.