The $1.66 billion MSG Sphere at The Venetian project, in Las Vegas, has reached a milestone as crews lifted a 170-ton steel compression ring into place last week. The 100-foot-diamter ring now sits at the top of the temporary 285-foot-tall shoring tower at the center of the structure.

In order to position the giant piece, crews reportedly spent almost a month assembling it on the ground before using the DEMAG CC-8800 crane (the fourth-largest crawler crane in the world, which arrived on site this time last year) to hoist it into place.

Crews will use a hydraulic lift to calibrate the ring’s exact position before roof trusses are put in place. When complete, the roof will stand 366 feet tall, and the building will be 516 feet at its widest point.

The project is still expected to be complete in 2023. 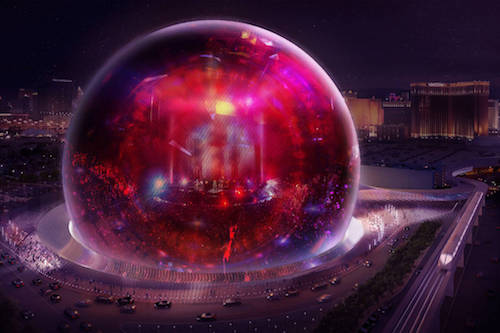 Madison Square Garden Company
The $1.66 billion MSG Sphere at The Venetian project, in Las Vegas, has reached a milestone as crews lifted a 170-ton steel compression ring into place last week. The 100-foot-diamter ring now sits at the top of the temporary 285-foot-tall shoring tower at the center of the structure.

In October, MSG Entertainment confirmed that a pair of steel girders (a combined 240 tons) were put it place earlier this month. The girders span the length of the venue’s stage and will support the structure’s 13,000-ton steel-domed roof—the heaviest lift of the project.

These girders and concrete are vital to the structure’s foundational support.

Most recently, at the end of last year, some contracts on the project shifted, as MSG Entertainment Co. announced that it was taking over construction management duties from general contractor AECOM.

According to reports, AECOM has transitioned from its role as general contractor with a new services agreement that facilitates involvement with the Sphere through the project’s completion.

The project now falls under new President of Development and Construction at MSG, Jayne McGivern, who has assembled a team of professionals for the project.

“We have taken significant steps to strengthen our internal construction team,” McGivern said in a statement at the time. “This, along with valued support from AECOM, will give us greater transparency and control over the construction process while enabling us to continue benefiting from AECOM’s expertise. MSG Sphere will be a venue unlike any other, and we believe we are well-positioned to not only advance our Las Vegas project, but also deliver on our long-term vision for MSG Sphere.”