According to reports, engineers are now considering the installation of a new truss on the 134-year-old Hammersmith Bridge over the River Thames in London.

If the plan is approved, the project could save years in completing the structure’s repair.

Built for the Metropolitan Board of Works from 1884-87, the Hammersmith Bridge is an elaborate suspension bridge measuring 250.5 meters long (roughly 823 feet), 13.1 meters wide, and carries a 8.2-meter-wide carriageway formed from wrought-iron girders.

The abutments and piers are made of concrete clad in Portland stone and cast-iron.

The structure also features wrought-iron parapets, mild steel chain links and air draught gauges both up and down stream. Heraldic designs including the Royal Arms of the U.K., Guildford (the county town of Surrey), Colchester (the county town of Essex) and the crests of the county of Kent and the cities of London and Westminster can be found on the bridge as well.

At the time, the cost to build the structure was 71,500 pounds (about $100,942) and was designed by the Board’s chief engineer, Sir Joseph Bazalgette. The bridge is painted dark green and gold—a color scheme that Bazalgette intended in the original plans. 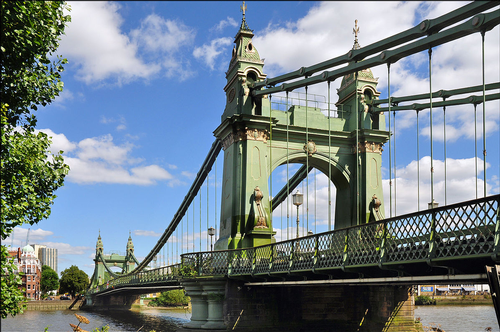 GeorgeRexTA, CC-BY-SA-2.0, via Wikimedia Commons
According to reports, engineers are now considering the installation of a new truss on the 134-year-old Hammersmith Bridge over the River Thames in London

From 1973-76, the bridge underwent extensive work to strengthen and repair the structure. In June 2000, the Hammersmith Bridge was the target of a terrorist bomb attack and following repairs, was reopened subject to a weight limit. Roughly 250,000 pounds had been spent on touching up decking and other minor repairs.

In August of 2019, the London Borough of Hammersmith and Fulham (LBHF) closed the bridge to motor vehicles due to cracking in the iron structure. The endeavor affected some 22,000 daily commuters. As the cracking worsened and safety concerns arose, the following summer the bridge was also closed to pedestrians, cyclists and river traffic.

According to the Hammersmith & Fulham Council, new sensors were reported to have caught the issues, as they were positioned throughout the structure and alerted engineers to the rapid increase in the size of dangerous micro-fractures in the cast-iron pedestals that support suspension cable saddles at the abutments. Although, engineers estimate that the roller bearings between the saddles and pedestals seized up at least 30 years ago.

While a heatwave was likely the cause of the more recent, rapid changes, the microfractures are also a consequence of decades of unchecked corrosion that plagues the bridge and poses a serious risk in that the bridge could suddenly, without warning, collapse.

These issues were only first discovered in 2015 after the current administration commissioned a Comprehensive Structural Integrity Review—a first in the bridge’s history.

In further assessments of the bridge, engineers predict stabilization would cost 46 million pounds, while a full restoration would cost up to 141 million pounds. The plan is supported by design firm Pell Frischmann Consultants Ltd. and could take more than six years to implement after funding has been secured.

By September, the Secretary of State for Transport Grant Shapps announced the creation of a government taskforce which intended to take over the project and develop solutions.

Members of the taskforce include Cllr Cowan, the Deputy London Mayor for Transport for London, the CEO of the Port of London Authority, the Leader of Richmond Council and respective officials. It is chaired by Baroness Vere of Norbiton who is a Parliamentary Under Secretary of State at the Department for Transport. The project director is Dana Skelley.

In November, a procurement process was launched for a ferry, hinting that the service would return by spring 2021. However, recent reports indicate that a replacement ferry service wouldn’t be up and running until the summer.

Since the announcement, monitoring work on the structure has continued, with Hammersmith & Fulham committing 2.7 million pounds towards the project this year alone.

Recently, Senior Partner and Head of Structural Engineering at Foster + Partners, Roger Ridsdill Smith, devised a plan that would allow traffic to flow much sooner than previously expected.

The plan calls for the installation of a new steelwork truss bridge within the existing structure, which would sit on new bearings at the towers and abutments. The truss would support an upper vehicle deck and a lower level for pedestrian, cyclists and maintenance access.

According to Engineering News-Record, the truss would be fabricated as two pieces on either side of the riverbank, then rolled toward one another to meet at midspan with their leading edges cantilevering to avoid loading the old structure.

While the cantilevers would measure roughly 65 meters, David MacKenzie, Executive Director for Bridges at COWI Consult U.K. Ltd. explained that the firm has launched structures much longer.

Not only would this plan allow for traffic to return to normal much sooner, but the truss would also provide a platform to dismantle the old deck for refurbishment. Smith reports that once the truss is in place, 20-meter sections of the deck could be lowered and taken offsite to be repaired.

“The intention would be to repair as much as possible of the existing structure…rather than replacing it,” he added.

Other rehabilitation plans to involve the replacement of edge stiffening trusses and placing a stiffened steel-plate orthotropic deck in place of the existing timbers.

In terms of mediating further cracking and preventing the seized bearings from causing more damage, LBHF is spending around $600,000 a year on controlling temperatures in the chain tunnels.

Smith and COWI are currently working on a feasibility study for LBHF, slated to be completed next month. In the meantime, engineers are still observing the extent of cracking on the structure. In preparing for surveys to be conducted by Mott MacDonald Group next month, workers have already removed all the pedestals’ decorative iron castings and plan to grit-blast the section’s paint off.

On the topic of funding, LBHF is reported to have none, and in wake of the coronavirus pandemic, the city’s transit authority Transport for London is also nearly bankrupt. The council is currently developing other financing options, which could include charging commuters for crossing the bridge.