At the beginning of the month, South Korean President Moon Jae-in revealed the country’s latest component in its Green New Deal: a 48.5 trillion won ($43.2 billion) plan to construct what is slated to be the world’s largest wind farm by 2030.

“With this project, we are accelerating the eco-friendly energy transition and moving more vigorously toward carbon neutrality,” the president said at the project’s signing ceremony, hosted in the southwestern coastal town of Sinan.

As part of the environmentally-friendly economic recovery plan in wake of the COVID-19 pandemic, South Korea plans to construct an offshore wind farm, capable of producing a maximum capacity of 8.2 gigawatts—the same amount of energy produced by six nuclear reactors, or the effects of planting 71 million pine trees. 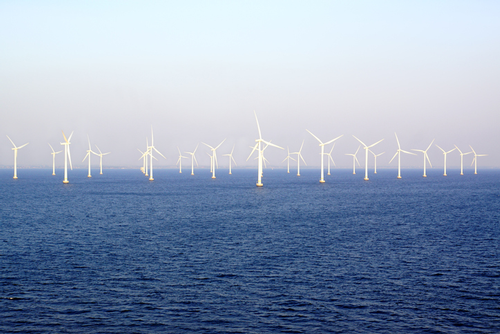 lacob MADACI / Getty Images
At the beginning of the month, South Korean President Moon Jae-in revealed the country’s latest component in its Green New Deal: a 48.5 trillion won ($43.2 billion) plan to construct what is slated to be the world’s largest wind farm by 2030.

The South Korean government will provide the remaining .9 trillion won.

Currently, the largest wind farm in the world is reported to be the Hornsea Project One, located 74 miles off the coast of Yorkshire, England. The wind farm officially began supplying energy to the United Kingdom in February 2019.

At the time of the power’s production announcement, Hornsea One was planned to cover 407 square kilometers, with a 1.2 GW capacity to power 1 million homes. The first two phases of the project are to use 7-MW turbines, though later portions of the Hornsea development may use 10-MW-plus turbines. Subsidies have already been awarded to a second stage that is slated for completion in 2020.

Made up of two offshore wind farms, the program is projected to yield a combined 2,490 megawatts of carbon-free energy.

The program is projected to bring in $8.9 billion in investments and create more than 5,200 jobs. Heading the project, Cuomo reported that the state had already contracted Equinor Wind US LLC, who is committed to manufacturing wind turbine components within the state.

As part of the offshore agreement—which will place the two offshore wind farms more than 20 miles off the shore of Long Island—Equinor will also be revitalizing the South Brooklyn Marine Terminal and the Port of Albany into large-scale offshore wind working industrial facilities.

In May, development company Mortenson (Minneapolis) began turbine construction at the 248.2-megawatt King Plains Wind Project in Garber, Oklahoma. The project is headed by energy services company ENGIE North America (Houston), who is reported to have over 2 GW of renewable projects throughout in the United States and Canada.

Once mobilized, the team started building access roads, a lay-down yard, collection system and various foundations. By December, the team was reportedly working on the project’s substation and O&M building.

The project was slated to reach completion by September, comprised of 88 2.82 MW general electric turbines over a span of approximately 60 square miles. Power Engineering reports that once completed, property taxes regarding the King Plains site will total nearly $50 million during its 30-year lifespan.

During peak turbine construction, the project was estimated to have 200-250 people employed onsite.