Preliminary work on the $500 million campus will now reportedly start in April, with groundbreaking to follow in August. The work is slated to take about four years.

For officials, the imminent construction is good news in light of the COVID-19 pandemic.

“The city has been hit hard by COVID and the economic challenges that have come from it,” said Mike Strautmanis, the Obama Foundation’s Chief Engagement Officer. “But the South Side has been hit harder, and these neighborhoods have been among the most hardest-hit. And so it’s exciting that these are the communities that will begin a new chapter that starts with this announcement.”

The foundation has reportedly not yet identified a contractor for the project.

Back in May 2017, former President Barack Obama unveiled plans for a three-building complex to be built in Jackson Park on the South Side of Chicago. At the time, the project was estimated to cost $500 million, with all funds slated to come entirely from donations and upkeep to be covered by taxpayers once construction was complete. 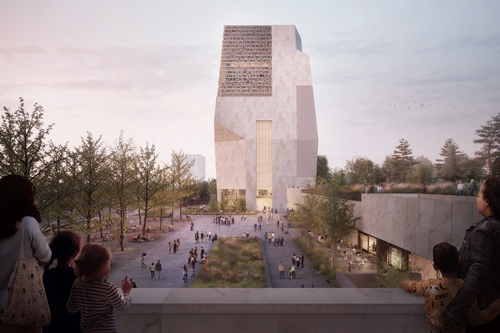 "It's not just a building. It's not just a park. Hopefully it's a hub where all of us can see a brighter future for the South Side," Obama said at the time.

In addition to the main complex features, the campus will also host a public plaza, athletic center, event building and a parking facility.

The structure was slated to open by 2021, but not without controversy.

One year after the announcement, a federal lawsuit was filed to prevent city officials from authorizing construction of the center, stemming from concerns over plan revisions that revealed omittance of a library and transferred park land to a private entity.

The lawsuit, filed by Protect Our Parks Inc. and three individuals, sought a court order to prevent the approvals and control of the site being transferred to the Foundation. Supporting reasons for the court order included:

Juanita Irizarry, Executive Director of Friends of the Parks, noted at the time that while group officials welcome the Obama Center, there is disagreement with the choice of park land for the project, as there is “vacant land across the street from Washington Park.”

By August 2018, a federal judge was asked to temporarily block construction considering reports that trees were being cut down in the park, even though there had been no final government approvals.

In a brief released in late June, lawyers representing the city informed the court that the lawsuit was premature, as the city council had not yet approved the ordinance that authorized the work. At the time, a judge put a stay on the lawsuit.

Things took a turn when the Chicago-Sun Times reported that trees were being cut down and baseball diamonds were being dug up on property close to what will be the Obama Center. The complex will be displacing the original track field, so the Obama Foundation agreed to pay Chicago Park District up to $3.5 million to replace it, though the Foundation will not be covering the replacement of the baseball field. The Foundation also paid for a tree study of Jackson Park.

In a motion, the trees getting knocked down was used as an example to dismantle the argument that the lawsuit had been filed “prematurely.”

City hall spokesperson Shannon Breymaier noted that both the motion and the lawsuit were both “without merit,” citing the fact that the establishment of “a new track and field in Jackson Park on land south of the proposed site of the Obama Presidential Center” was not part of the lawsuit. The plan had reportedly been on public record for months.

Then, in November 2019, new renderings were released during the third-annual Obama Foundation Summit in Chicago.

According to reports, the designs aimed to create more options for community engagement with the project. Located by South Stony Island, the Obama Presidential Center’s structures reveal integration into and along Jackson Park’s natural landscape, while most of the space plans to remain open.

“We’ve spent the past few years talking with the community and meeting with neighbors and stakeholders to incorporate their input on how the residents of the South Side and the city of Chicago want to experience the Obama Presidential Center in Jackson Park,” said David Simas, CEO of the Obama Foundation.

In developing the new renderings, the Obama Foundation noted that tree health, biodiversity, soil quality and non-compliance with the City of Chicago stormwater ordinance posed many challenges.

To overcome these issues, the center changed its plans to incorporate various sustainability features such as a “Wetland Walk”—a pathway complete with seating, a tree canopy and child play area—that runs through a one-acre wetland area intended to capture and treat stormwater; a Women’s Garden, which will preserve the form and location of the historic sunken lawn and includes an enlarged perennial garden that captures and treats rainwater, and more trees and soil harvests.

Details on a children’s play area were also released. The space is to host a large playground with equipment chosen through the input of South Side community members, parents, educators and families. The play area will also include lagoon- and woodland-themed recreational opportunities and will be accessible throughout all four seasons.

Additionally, the complex’s museum structure—which is intended to serve as a Chicago South Side landmark—is slated to be offered as a free experience to the public. Dubbed the “Sky Room,” the experience can be accessed without museum admission and features views of the surrounding South Side, Jackson Park and waterfront.