In a blog post published earlier this week, Amazon unveiled the proposed design plans for the second phase of its second headquarters in Arlington, Virginia. The company notes that despite the COVID-19 pandemic, it's hiring and construction are on pace.

“Today, we submitted our proposed development plans for the second phase of new construction for our Arlington headquarters. For this project, we’re doubling down on the importance of fostering an open and inviting community by creating a new destination for local residents,” the company said.

“Designed by leading architecture firm NBBJ, our plans also infuse nature into the urban landscape and create a unique, sustainable environment where our employees can work and invent for our customers. Our designs create open and active spaces that aim to bring people closer to nature in an effort to further nurture innovation and creativity.”

The campus, called “PenPlace” will become a developed 2.8 million square feet of office space distributed across three 22-story buildings—all of which are aiming for LEED Platinum status.

The crown jewel of the, though, is “The Helix,” which is modeled after the same concept of biopohilia that is seen at the Seattle headquarters’ Spheres. 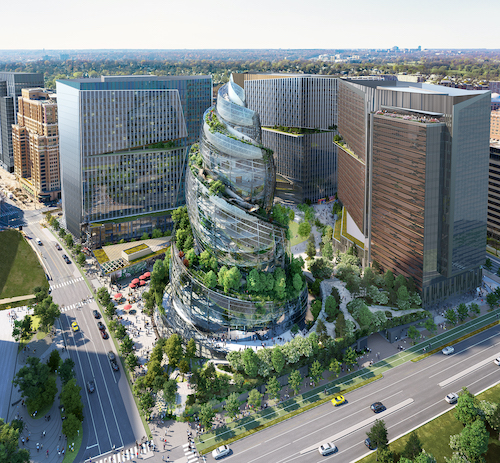 Amazon
In a blog post published earlier this week, Amazon unveiled the proposed design plans for the second phase of its second headquarters in Arlington, Virginia. The company notes that despite the COVID-19 pandemic, its hiring and construction are on pace.

“The natural beauty of a double helix can be seen throughout our world, from the geometry of our own DNA to the elemental form of galaxies, weather patterns, pinecones, and seashells. The Helix at our Arlington headquarters will offer a variety of alternative work environments for Amazon employees amidst lush gardens and flourishing trees native to the region,” Amazon said.

“A true double helix in shape and structure, this unique building will feature two walkable paths of landscaped terrain that will spiral up the outside of the building, featuring plantings you may find on a hike in the Blue Ridge Mountains of Virginia. And because innovative technology often derives from the intersection of art and science, we’ve planned an artist-in-residence program to be hosted within The Helix. Local artists, in collaboration with our employees, will be inspired by the nature within the building as they create their pieces.”

The company plans to open the building to public tours and also plans on 2.5 acres of public-use space that will include both an amphitheater and forest grove. Retail pavilions and restaurants will also be located throughout the site with a 20,000-square-foot community space.

On Nov. 13, 2018, Gov. Ralph Northam announced that Amazon would be investing approximately $2.5 billion into what would be its new headquarters. Located in National Landing—an area that includes parts of Pentagon City and Crystal City in Arlington County, in addition to Potomac Yard in the City of Alexandria—was selected after a 14-month-long competitive site selection process.

JBG SMITH (Chevy Chase, Maryland) was chosen to be a partner to Amazon in the development and housing of the HQ2 location.

The HQ2 design involves a 2.1 million-square-foot office complex complete with two 22-story office towers and an additional 67,000 square feet of ground-floor retail. The buildings’ rooftops are to be filled with greenery and some are slated to even feature dog parks. In total, Amazon plans to occupy more than 4 million square feet of energy-efficient office space. HQ2 renderings and blueprints also reveal various ground-level green spaces, bicycle and parking spaces, and a 12,500-square-foot daycare center.

Curbed reported that earlier this year, Virginia lawmakers approved hundreds of millions in tax incentives for the project’s development. Northam also announced last month that Virginia signed an agreement with Dominion Energy to purchase 30% of the all energy used by the state government’s buildings from renewable sources. The agreement comes only two months after Arlington committed to reaching carbon neutrality for all public and private buildings by 2050.

“Under the partnership, Dominion Energy will supply the Commonwealth with 420 megawatts of renewable energy,” the utility company wrote in a statement. “When combined with previously announced solar projects, the power produced is enough to meet the equivalent of 45% of the state government’s annual energy use.”

Additional work for the project includes extending the Crystal City Potomac Yard Transitway 1.1 miles in order to connect the City of Alexandria through Pentagon City in Arlington. The first segment design is slated for completion by the summer of 2020. Designs, pricing and contract documents for a new Potomac Yard Metrorail station are also expected to be finalized by the end of 2019 with completion of the station envisioned for 2022.

In 2019, Virginia Polytechnic Institute and State University—more commonly known as Virginia Tech—announced a partnership with data-driven real estate investment firm Lionstone Investments for the building of a new $1 billion innovative campus. The Innovation Campus is part of the tech-talent pipeline package created by the Virginia Economic Development Partnership and approved by the General Assembly, which was originally intended to lure Amazon HQ2 to the location. Now, the Innovation Campus will neighbor HQ2.

As a part of the $750 million incentives package, the state of Virginia plans to invest millions of dollars in the campus project.

“We’re extremely pleased to have this opportunity, in partnership with Lionstone, to establish the Innovation Campus in the heart of the National Landing technology district,” said Virginia Tech President Tim Sands. The Tech Talent Investment Program is also receiving up to $1.1 billion to more than double the annual number of graduates receiving bachelor’s and master’s degrees in computer science and related fields.

Until construction is completed, there are currently about 300 Amazon employees working out of a 120,000-square-foot leased space in Crystal City. However, that number is expected to grow to 400 by the end of the year and will continue toward its goal of 25,000 people over the next 15 years.

At the end of 2019, the decision was made to have the facility go beyond its intended LEED Gold certification and strive instead for the LEED Platinum.

For the project to reach LEED Platinum, the U.S. Green Building Council will look at the structure’s sustainability, water efficiency, indoor environmental quality, materials and resources, as well as energy and atmosphere. Based on points given from a 0-100, Amazon HQ2 will need at least 80 points to be awarded the Platinum status.

To achieve these goals, Amazon is looking at forgoing natural gas in its kitchens and cafeterias, greener landscaping and upping its percentage of electric vehicle parking spaces and charging stations. The company is also considering building an offsite solar or wind farm to power the facilities with renewable energy.

The design—both sustainably and aesthetically—for The Helix is headed by NBBJ, the same firm that designed Seattle’s Spheres, a project that was nominated for a PaintSquare Elevation Award.

Consultancy firm TNW Inc. teamed up with NBBJ and Tnemec Company Inc. for the exterior of Amazon’s green office spheres, a trio of glass-enclosed buildings with structural steel shells.

“The interior workspace surrounds employees with a waterfall, trees and thousands of plants from around the world,” said TNW’s Scott McConnell.

“As soon as the building is closed down at night, the humidity is increased to 85 percent, then it drops down to 60 percent during business hours. That is why they needed a coating system with long-lasting corrosion protection.”

The project’s original specification called for a urethane topcoat, but was changed to a fluoropolymer coating system, which McConnell said turned out to be the right call because of the extreme environment inside.

The fabricator spray-applied a prime coat of Series 90-97 Tneme-Zinc, a zinc-rich aromatic urethane coating, over steel that was prepared in accordance with SSPC-SP 10/NACE 2 Near-White Metal Blast Cleaning.

After the steel was shipped to the site and assembled, the field applicator power-tool cleaned the weld seams and coated them with Series 94-H2O Hydro-Zinc, a single-component aromatic urethane coating containing less than 100 grams per liter of VOCs. Applicators completed the coating system with an intermediate coat of Series 27WB Typoxy, a water-based epoxy with exceptional durability and corrosion resistance, and the finish coat of Series 1072V Fluoronar, a low-VOC, fluoropolymer coating with outstanding color and gloss retention. Coatings were roller-applied in the field.

This same system was used on the exterior metal of another Seattle Amazon office building, as well as on other sculptures in the plaza; it's all part of the original $4 billion headquarters complex for the online retail giant.