At the start of the year, New York City celebrated the opening of the Moynihan Train Hall, the $1.6 billion project that’s part of a larger effort of work on the historic Penn Station.

The 255,000-square-foot hall is a transformation of the James A. Farley Post Office Building and has increased Penn Station’s concourse space by 50%.

Gov. Andrew Cuomo praised the project—which had undergone considerable delays—for its completion during the COVID-19 pandemic.

"The completion of this gorgeous new train hall would be a special accomplishment at any time, but it's an extraordinary accomplishment today because we're at a place where no one ever envisioned being. This has been a traumatic year, both individually and collectively, and the question facing us has been, how do we respond?" Cuomo said.

"Senator Daniel Patrick Moynihan was a man of true vision. He saw the potential in an underutilized post office and knew that if done correctly, this facility could not only give New York the transit hub it has long deserved, but serve as a monument to the public itself. We built this as a statement of who we are, and who we aspire to be. Is it grand? Yes. Is it bold? Yes, because that is the spirit of New York and that is the statement we want to make to our visitors, to our children and to future generations. As dark as 2020 has been, this new hall will bring the light, literally and figuratively, for everyone who visits this great city." 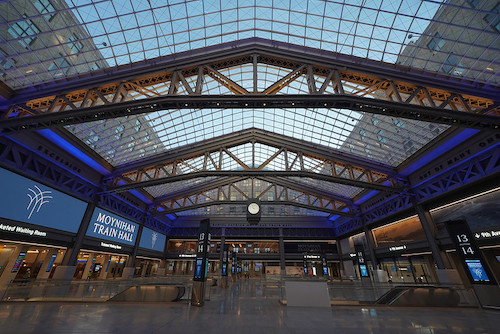 Office of Gov. Andrew Cuomo
At the start of the year, New York City celebrated the opening of the Moynihan Train Hall, the $1.6 billion project that’s part of a larger effort of work on the historic Penn Station.

The project was led by Empire State Development through a public-private partnership with Vornado Realty Trust, The Related Companies, Skanska, the MTA, the Long Island Rail Road, Amtrak and the Port Authority of New York and New Jersey.

Designed by Skidmore, Owings & Merrill, the concourse provides access to 17 of the station's 21 tracks. One of the main design elements is the reuse of the three original 150-foot-long steel trusses. A steel box beam was added so that the framing could be removed for the installation of several skylights, a focal point of the hall. Ceiling murals are also present above the 31st and 33rd street entrances.

Reportedly, there are more portions of the Farley building that are under renovation that are slated to open to the public later this year.

The Moynihan entrance is just part of a multibillion-dollar plan to improve the station, which was announced in September 2016 with work beginning the next year.

Construction began with a restoration of the post office’s facade, including its 700 windows, copper roof, steel trusses and terra-cotta cornices.

However, just last summer, a report from Amtrak revealed that its part of the train hall project was delayed and over budget, calling the December opening deadline into question.

At the time, Amtrak said that certain functions that might not be online by December include passenger information displays or other station operations, which might not be available until March of next year.

The company attributes the delays and costs to “lack of oversight and insufficient experiences from staff.”

“We have previously reported on the company’s challenges delivering large, complex programs on time and within budget and recommended that the company incorporate best practices into its company-wide program management oversight policies and procedures,” according to the report.

“The company has taken significant steps to remedy early program management deficiencies on the Moynihan program. It did not, however, take these actions soon enough to avoid cost increases and ensure that it can complete its entire station relocation by the scheduled opening date at the end of 2020. These ongoing cost and schedule risks are the result of ineffective executive oversight coupled with inexperienced staff during the program’s first two years, and a failure to follow the company’s program management standards.”

As recently as June (with only six months left in the initial schedule) Amtrak said that the program team did not have reliable planning or management.

However, city officials were quick to point out that Amtrak was only one piece of the puzzle.

“Amtrak’s project is a subcomponent of the larger train hall, representing less than 10% of the overall project, and it would be a mistake to draw broad-based conclusions from this narrowly-focused report,” said Eric Gertler, CEO-Designate of Empire State Development.

“The Moynihan Train Hall will be complete by the end of this year, on budget and ahead of schedule, and Amtrak leadership have assured us they will meet that timeline. Once completed, it will provide New Yorkers with the modern transit hub they deserve, while honoring the legacy of the original Penn Station. From the Kosciuszko Bridge to the Albany Airport to the new Rochester Rail Station, this administration has a history of delivering major infrastructure projects on time and on budget—and after 30 years of delays, we will do the same at Moynihan Train Hall.”