On Friday (Jan. 15), the United States Department of Transportation released the “Hyperloop Standards Desk Review,” which plans to aid policymakers in better understanding standards and regulations in relation to hyperloop technologies.

The report was developed by the Volpe National Transportation Systems Center on behalf the Department’s Non-Traditional and Emerging Transportation Technology (NETT) Council.

Established in March 2019, the NETT Council serves as an internal deliberative body to identify and resolve jurisdictional and regulatory gaps that may impede the deployment of new technologies, such as potential advances in tunneling technology and hyperloop.

Back in July, the USDOT released “Pathways to the Future of Transportation: A Non-Traditional and Emerging Transportation Technology Council Guidance Document,” in order to provide framework for the Department’s approach toward non-traditional and emerging technologies, such as hyperloop.

However, in response to the document, stakeholders shared that it would be helpful for the Department to consider the applicability of international or private sector standards to hyperloop systems. 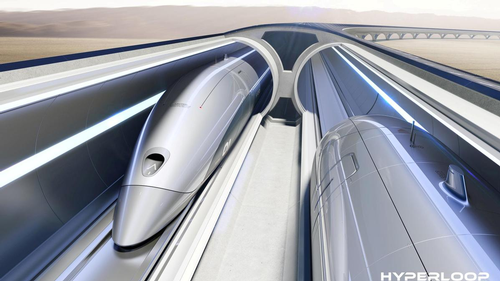 Neuhausengroup, CC-BY-4.0, via Wikimedia Commons
On Friday (Jan. 15), the United States Department of Transportation released the “Hyperloop Standards Desk Review,” which plans to aid policymakers in better understanding standards and regulations in relation to hyperloop technologies.

As a result of the requests, the USDOT developed the “Hyperloop Standards Desk Review” as a preliminary mapping of existing standards and regulations to specific hyperloop systems components. While the document is not intended to be comprehensive, prescriptive or definitive, the USDOT hopes it will inspire a dialogue for future hyperloop standardization efforts and identify stakeholder perspectives on the applicability of existing standards to domestic testing and deployment.

Just a few months ago, in November, American transportation technology company Virgin Hyperloop announced that it had successfully completed its first trial involving human passengers in its levitating hyperloop capsules.

Josh Giegel, CTO and co-founder of Virgin Hyperloop, and Sara Luchian, Virgin Hyperloop's Director of Passenger Experience, were the two passengers to ride the new form of transportation at the company’s DevLoop site in the barren desert, located about 35 miles north of Las Vegas.

According to reports, the test was conducted using a new two-seated XP-2 vehicle—nicknamed Pegasus—built specifically for testing safe passenger travel within the hyperloop pod. The new design was created in a collaboration involving Bjarke Ingels Group and Danish studio Kilo Design and features several wheels that retract as the magnetic levitation comes into force to avoid any drag.

Once Giegel and Luchian were strapped in, an airlock system was used to move the vehicle in and out of the semi-vacuum environment. In launching the duo, the XP-2 vehicle was propelled electromagnetically through the tunnel at speeds reaching up to 107 miles per hour. In total, the maiden voyage was reported to have lasted only 15 seconds.

After the system has been full realized, the singular capsule used for the journey will be redesigned to seat up to 28 passengers and is expected to reach speeds of up to 760 mph with a longer track.

A month prior to the test, Virgin announces that after years of testing and developing hyperloop technology at its full-scale test site in North Las Vegas, it would be building its Hyperloop Certification Center in West Virginia.

According to a press release issued by Virgin Hyperloop, the HCC project builds off of the current progress being made on the regulatory front in the U.S. In July, the Secretary of the U.S. Department or Transportation, Elaine Chao and the Non-Traditional and Emerging Transportation Technology (NETT) Council unveiled a guidance document, outlining a regulatory framework for hyperloop in America.

The historic announcement not only provides a pathway for hyperloop regulation and deployment in the U.S., but also establishes hyperloop’s eligibility for federal funding for projects. According to Virgin, the federal momentum, paired with the advancements of the HCC, will pave the way for the certification of hyperloop systems and are the first steps towards commercial projects.

In the company release, Virgin reports that not only will the HCC progress the industry in regulatory and commercial fronts, it also plans to create an entirely new ecosystem and will create thousands of new jobs across construction, manufacturing, operations and high-tech sectors.

Slated to be built on an 800-acre site spanning Tucker and Grant counties, the $500 million certification center will include a welcome center, testing facilities, a training center on operations, maintenance and safety, a manufacturing facility, and six-mile-long certification track. Danish architectural firm, Bjarke Ingels Group has been selected to design the HCC.

Construction of the center, which is partnered with WVU, Marshall University and others, is expected to begin sometime this year. Virgin Hyperloop aims to achieve safety certification by 2025, with commercial operations beginning in 2030. The nascent technology is expected to run at 600 miles per hour or faster.

WVU's Bureau of Business and Economic Research predicts the center will have an economic impact of $48 million annually.