Researchers from Nagoya University have recently discovered a rare concrete-strengthening mineral within the walls of a decommissioned power plant in Japan.

The mineral, aluminous tobermorite, is reported to have allowed Roman concrete marine barriers to survive for more than 2,000 years.

In Rome, the aluminous tobermorite formed because of seawater dissolving volcanic ash in the mixture, ultimately allowing the concrete marine barriers to endure conditions for over two millennia.

According to the university, because the mineral is a crystal, it makes concrete more chemically stable and stronger. However, the mineral is very difficult to incorporate directly into modern-day concrete materials. 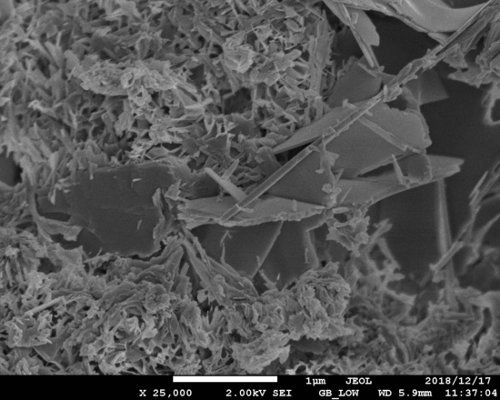 Nagoya University
Researchers from Nagoya University have recently discovered a rare concrete-strengthening mineral within the walls of a decommissioned power plant in Japan.

"We found that cement hydrates and rock-forming minerals reacted in a way similar to what happens in Roman concrete, significantly increasing the strength of the nuclear plant walls," says Nagoya University environmental engineer Ippei Maruyama.

In the case of the Hamaoka Nuclear Power Plant specifically, university researchers found that the aluminous tobermorite increased the strength of the walls more than three times their design strength.

To conduct further research on the crystal, scientists were able to generate the mineral in a lab, however, it required very high temperatures above 70 degrees Celsius. This temperature has since been reduced to 65 degrees C or lower, as additional lab experiments revealed that hot environments were detrimental to concrete strength.

Using samples collected from Hamaoka, Maruyama and his colleagues found that aluminous tobermorite formed in the nuclear reactor's concrete walls when temperatures of 40-55 degrees C were maintained for 16.5 years.

Through an in-depth analysis, researchers found that the reactor's very thick walls were able to retain moisture and in turn, developed an increased availability of silicon and aluminum ions and the alkali content of the wall, and eventually formed aluminous tobermorite.

"Our understanding of concrete is based on short-term experiments conducted at lab time scales," says Maruyama. "But real concrete structures give us more insights for long-term use."

From these findings, Maruyama and his colleagues are continuing to search for ways to make concrete more durable and environmentally friendly that still meet standardized requirements for strong concrete structures.

The study, "Long-term use of modern Portland cement concrete: The impact of Al-tobermorite formation," has since been published in the journal Materials and Design.

Just last month, a team of researchers across a variety of universities reported that they were collaborating to resolve issues with how tunnel service lives are being determined.

Specifically, Florian Mittermayr, researcher at the Institute of Technology and Testing of Construction Materials at Graz University of Technology said that, "The service life is currently calculated on the basis of theoretical key figures and empirical values. Environmental conditions such as chemically aggressive groundwater, for example, can possibly lead to cost-intensive maintenance measures earlier than expected.”

In tackling a more precise life expectancy, in a project jointly initiated by the Austrian Society for Construction Technology (ÖBV), TU Graz and OTH Regensburg, researchers worked to define a more systematic understanding of shotcrete applications, leading them to form a new basis for more durable concrete mixes in tunnels.

According to the research findings, shotcrete can be designed more durable when cements, supplementary cementitious materials, admixtures and aggregates are better matched to the requirements. In the collaborated investigations, the team found that granulated blast furnace slag—in combination with other supplementary cementitious materials—is an effective way of increasing resistance against sulphate attack. These sulphate ions are traditionally observed as a result of gypsum dissolution and can be witnessed in soil or groundwater and lead to deformations and even cracks in the concrete.

Additionally, supplementary cementitious materials such as metakaolin or siderite can help to reduce the contribution of shotcrete to sinter formations (process of calcium carbonate precipitation) in the drainage system. These issues can further lead to the clogging of tunnel drainage systems, which can lead to tunnel closure for maintenance and repair.

The team also found that even the smallest addition of ultrafine limestone powder can significantly increase the early strength of shotcrete, making it possible to use the additives for more durable and sustainable shotcrete materials.

In October, engineers from RMIT University (Melbourne, Australia) announced that they had developed an eco-friendly, zero-cement concrete that could withstand corrosive acidic environments, commonly observed in sewage pipes and other types of wastewater infrastructure.

According to RMIT, the material consists of manufacturing by-products including a zero-cement composite of nano-silica, fly-ash, slag and hydrated lime. In using the industrial by-products, the end result is reported to surpass sewage strength standards set by ASTM International and is more durable than ordinary Portland cement.

“Though ordinary Portland cement is widely used in the fast-paced construction industry, it poses long term durability issues in some of its applications,” Roychand reported. “We found making concrete out of this composite blend—rather than cement—significantly improved longevity.”

Additionally, the final product is also environmentally friendly, reduces concrete corrosion by 96% and eliminates residual lime that is instrumental in the formation of fatbergs.

A paper on the study, "Development of zero cement composite for the protection of concrete sewage pipes from corrosion and fatbergs" has since been published in Resources, Conservation & Recycling.