Recently, a group of scientists from the Tokyo University of Science investigated how heat efficiency could be improved in aircraft gas turbine engines through oxidative reactions regarding the heat-resistant coating, ytterbium silicide (Yb-Si).

The study has since been published in Intermetallics.

According the university, Junior Associate Professor Ryo Inoue, Assistant Professor Yutaro Arai, Professor Yasuo Kogo, from the Tokyo University of Science, and Senior Researcher Takuya Aoki, from the Japan Aerospace Exploration Agency, alongside others, conducted the study as a means to better understand the oxidation mechanisms in Yb-Si.

The coatings material was originally developed for the high-temperature sections of aircraft gas turbine engines, as its heat-resistant properties are known to successfully prevent the formation of structurally harmful SiO2 in the coating. However, the team of scientists report that the coating’s oxidation mechanisms remain unclear.

To take a better look, the team set out to demonstrate how the Yb to Si ration in the material, as well as the surrounding atmosphere, affected the oxidation process. Overall, the study aimed to open more doors in the development of energy efficient gas turbines. 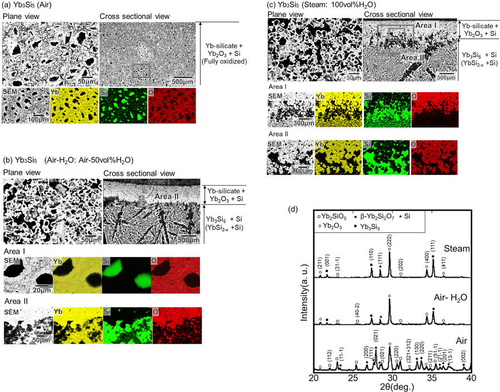 Advanced Functional Materials
Recently, a group of scientists from the Tokyo University of Science investigated how heat efficiency could be improved in aircraft gas turbine engines through oxidative reactions regarding the heat-resistant coating, ytterbium silicide (Yb-Si).

In the study, researchers looked at the possible use of ceramic matrix composites made of silicon carbide (SiC), a possible solution for gas-turbine engines which are noted to reach temperatures above 1,200 degrees C. However, the material requires a heat-resistant coating layer to prevent the oxidation of SiC and subsequent evaporation of SiO2—a process that leads to a decrease in the material volume and structural defects, such as large cracks or the topmost layer flaking off.

The university reports that currently, existing coating options are unable to fully prevent this oxidization to SiO2 because oxygen can permeate through microscopic cracks in these layers or by simple diffusion.

In taking a different approach, the scientists looked at Yb-Si, as the material is known to reach high melting points and its oxides are mainly Yb-silicates, which remain attached as an oxide layer and do not evaporate easily. The only concern about the material at the time of the study was how it might react in air or water vapor environments.

To observe a variety of reactions, the team of scientists tested the Yb-Si coatings at high temperatures under three types of atmospheres: air, water vapor and a mixture of both. Before and after heat exposure tests, scientists visualized and quantified the morphology and composition of the Yb-Si samples using X-ray diffraction analysis, energy dispersive spectroscopy, and scanning electron microscopy.

In their findings, researchers found that the Yb to Si ratio was a major player in defining the oxidation behavior of the material, noting that Yb5Si3 oxidized more than Yb3Si5 because of the preferential oxidation of Yb in silicide. Additionally, the amount of oxide decreased considerably in more water vapor-rich atmospheres.

“After heat exposure of both silicides in steam, we found SiO2 in Yb5Si3, whereas Si was actually still present in Yb3Si5," said Inoue, who led the study. "Our analyses indicate that SiO2 growth is suppressed in Yb3Si5 because SiO2 partakes in, and is the limiting factor of, reactions that form Yb-silicates.”

Inoue added, “If a coating that can withstand harsher environments can be realized, engine parts will become more heat resistant, which naturally leads to higher engine efficiency.”

While exact intermediate reactions have yet to be defined, the study is reported to provide meaningful insight into what happens during the oxidation of Yb-Si and aims to aid in the development of protective coatings for aero gas-turbines engines and reduce aerial transportation costs and fuel consumption, making flying cheaper and less harmful to the environment.

Back in August, researchers at Virginia Tech announced that they had developed what they call a “game-changer” for heat conduction in aircraft. Jonathan Boreyko, an associate professor in mechanical engineering, has developed an aircraft thermal management technology, which was recently published in Advanced Functional Materials.

Diodes allow heat to conduct in only one direction by use of engineered materials. For management of heat, for instance, diodes make sense because they enable the “dumping of heat” entering one side, while resisting heat on the opposite side.

According to the university, the team created a diode using two copper plates in a sealed environment, separated by a microscopic gap. The first plate has a wick structure to hold water, while the opposite plate has a hydrophobic coating.

The water on the wicking surface receives heat, causing evaporation into steam. As the steam moves across the narrow gap, it cools and condenses into dew droplets on the hydrophobic side. These dew droplets grow large enough to “bridge” the gap and get sucked back into the wick, starting the process again.

This object is then affixed to a heat source, and the hydrophobic, nonconducting side prevents heat from entering via the air or other heat sources that may be near, allowing the diode to manage the heat only from its main subject, according to the research.

Last year in November, the U.S. Naval Research Laboratory’s Center for Corrosion Science and Engineering developed what was billed as a more user-friendly topcoat. The material was applied to the exterior of aircraft belonging to both the Navy and Marine Corps.

Based on organosilane polymers, the topcoat is a one-component polysiloxane that was created without harmful isocyanates and other hazardous air pollutants. Around the time of the announcement, the topcoat was applied to U.S. Navy F/A-18 Hornet stationed in Naval Air Station Patuxent River, Maryland.

In replacing isocyanates with polysiloxane, workers’ health is better kept intact. The new coating developed by the NRL also reportedly has lower levels of VOCs. Additionally, the coating does not require any metering or mixing of components due to everything being in one container.

The product was developed in collaboration with the Naval Air Systems Command and sponsored by the Defense Department’s Environmental Security Technology Certification Program, and received additional financial assistance from the Office of Naval Research.