At the beginning of the month, the United States Department of Transportation announced that it was ensuring that all its regulatory measures would be taken for the safe, rapid transportation of the COVID-19 vaccine by land and air.

With the unprecedented pace of vaccine development, the Department is making proper preparations to enable immediate mass shipment of the vaccine.

“The Department has laid the groundwork for the safe transportation of the COVID-19 vaccine and is proud to support this historic endeavor,” said U.S. Transportation Secretary Elaine L. Chao.

Back in March, Boston became the first U.S. city to halt construction activities amid the COVID-19 pandemic, banning all construction in the city for 14 days after reporting that 33 people have been infected with the virus. This construction ban, however, was extended by the end of the month.

With the number of cases on the rise, that same month the Trump administration requested that U.S. construction companies donate their safety mask inventory to hospitals and health care facilities currently experiencing shortages. 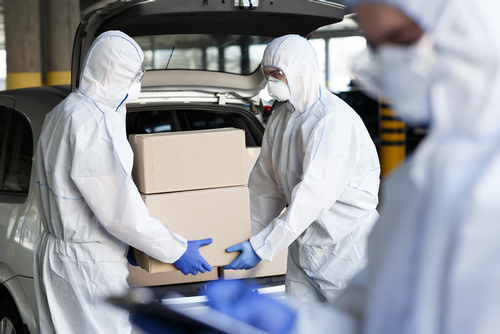 Prostock-Studio / Getty Images
At the beginning of the month, the United States Department of Transportation announced that it was ensuring that all its regulatory measures would be taken for the safe, rapid transportation of the COVID-19 vaccine by land and air.

Also in March, the Pennsylvania Department of Transportation (PennDOT) and Pennsylvania Turnpike Commission ordered all contractors to cease work on current projects for a minimum of two weeks, making it the first state to suspend infrastructure-based construction as a result of the growing COVID-19 pandemic.

The pause in construction followed state Gov. Tom Wolf’s decision to extend the shutdown of all non-essential businesses to all of Pennsylvania’s 67 counties. At the time, the decision is expected to be effective until the end of the month, but was under constant review for potential changes.

In between these types of industry shutdown reports, PaintSquare Daily News also covered a variety of hospital and healthcare facility rapid-build projects. Over the early course of the virus outbreak, multiple state governors were reported to be in talks with the Army Corps of Engineers for plans on site for temporary hospitals to combat capacity issues resulting from the COVID-19 pandemic.

In additional efforts, Italian architects Carlo Ratti and Italo Rota designed an intensive-care pod in a shipping container with the aim to help alleviate stress on the world’s medical infrastructure. Dubbed Connected Units for Respiratory Ailments, the first ICU pod prototype was built in Milan.

At the end of the month, U.S. Department of Labor’s Occupational Safety and Health Administration published “Guidance on Preparing Workplaces for COVID-19” with the aim to help companies respond to the pandemic. The guidance was developed in collaboration with the U.S. Department of Health and Human Services.

The list also includes workers who support crucial supply chains and enable functions for critical infrastructure, including but not limited to:

Around the same time, USDOT announced $25 billion in federal funding allocations for the nation’s transportation systems and $1 billion in funding for the National Railroad Passenger Corporation (Amtrak) in response to the COVID-19 pandemic. Both allocations were made available through the Coronavirus Aid, Relief, and Economic Security (CARES) Act, which was signed by President Donald J. Trump on March 27.

The announcement for funding arrived after the American Association of State Highway and Transportation Officials (AASHTO) inked a letter to Congressional leaders the previous month, seeking support for the creation of a fiscal “backstop” for the transportation sector.

That same month, the U.S. Small Business Administration’s Paycheck Protection Program reported that its first round of funding was mostly divvied out to the construction industry, which allowed for a cap of $349 billion in loans to be given to small firms that qualified during the COVID-19 pandemic. The money ran out April 16.

Throughout the past year, the industry also witnessed almost all  of its in-person conferences be postponed, moved online, or canceled all together, including CORROSION 2020, PaintExpo 2020, Venice Biennale, and PaintSquare’s Contractor Connect, among others.

To get a full spectrum of the pandemic’s impact on the industry, earlier this month, the Associated General Contractors of America, announced in a new analysis that 30% of the nation’s metro areas have added construction jobs in the last year. Officials pointed to the obvious impact that the COVID-19 pandemic has had on business as well as governments and their construction projects.

According to the USDOT’s press release on the matter, Department agencies and officials from Operation Warp Speed—a public–private partnership initiated by the U.S. government to facilitate and accelerate the development, manufacturing, and distribution of COVID-19 vaccines, therapeutics, and diagnostics—have been coordinating with the private sector companies that will carry the vaccines from manufacturing facilities to the distribution centers and inoculation points.

The USDOT has also been working with other U.S. government agencies, air carriers and aviation stakeholders to ensure the continued transport of critical medical supplies and personnel in support of Project Air Bridge and has since issued emergency regulatory relief for flight crews and other aviation entities to support uninterrupted flight operations and respond to increased air cargo demand.

With these adjustments, the Department adds that safety requirements for all potential hazards involved in shipping the vaccine, including standards for dry ice and lithium batteries, have been established as well.

In other efforts to prepare for shipment, the Department announced that it extended the Federal Motor Carrier Safety Administration’s long-standing Emergency Declaration in order to further promote emergency transportation of vaccines and medical supplies and equipment.

A COVID-19 vaccine from Pfizer and BioNTech is expected to be approved in the U.S. in the coming weeks and shipping to states beginning in mid-December.