Bjarke Ingels Group has recently partnered with ICON, a construction technology developer, and SEArch+, to begin designed a sustainable habitat for the moon.

The project—dubbed Project Olympus—aims to produce structures that provide better thermal, radiation and micrometeorite protection than metal or inflatable habitats.

ICON was tapped by NASA’s Marshall Space Flight Center to test lunar soil stimulants with various printing technologies. The tests will help develop prototypes for a possible additive construction system that could print infrastructure on the moon itself. 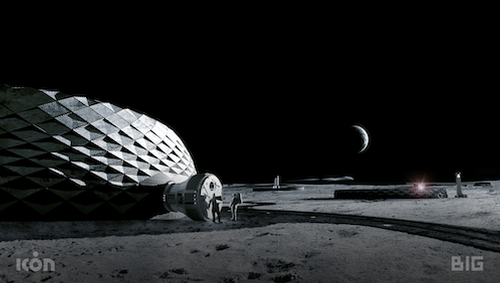 ICON
Bjarke Ingels Group has recently partnered with ICON, a construction technology developer, and SEArch+, to begin designed a sustainable habitat for the moon.

“Building humanity’s first home on another world will be the most ambitious construction project in human history and will push science, engineering, technology, and architecture to literal new heights,” said Jason Ballard, Co-founder and CEO of ICON, in a release.

“NASA’s investment in space-age technologies like this can not only help to advance humanity’s future in space, but also to solve very real, vexing problems we face on Earth. We are honored to begin our research and development on ICON’s ‘Project Olympus’ and the ‘Olympus Construction System.’”

The moon-based printer is also being configured to run autonomously with remote instructions from another base or even from Earth.

"To explain the power of architecture, 'formgiving' is the Danish word for design, which literally means to give form to that which has not yet been given form. This becomes fundamentally clear when we venture beyond Earth and begin to imagine how we are going to build and live on entirely new worlds,” said Bjarke Ingels, Founder and Creative Director, BIG. “With ICON we are pioneering new frontiers—both materially, technologically and environmentally. The answers to our challenges on Earth very well might be found on the Moon.”

This isn’t the first time Ingels has been picked for space design. In 2017, the government of Dubai released plans for the Mars Science City project, tapping the Bjarke Ingels Group as the architect.

At the time, it was announced that 500 million UAE dirham ($136 million) would go into the 1.9 million-square-foot project that aims to provide a viable and realistic model to simulate living on Mars.

Ingels will work with a team of engineers and designers led by the Mohammed bin Rashid Space Centre and Dubai Municipality to create the campus that will be made up of several domes.

The planet’s environment and terrain will be simulated through 3D printing and heat and radiation insulation, and the domes will include laboratories for food, energy and water, as well as agricultural testing and food security studies.