CA Invests $2B in Infrastructure Projects

Last week, the California Transportation Commission announced it had approved $2 billion for 56 new infrastructure projects that aim to address a variety of transportation needs throughout the state.

In the same release by Caltrans on the announcement, the CTC also reported that it had allocated more than $565 million for current infrastructure projects. Both investments are slated to repair highways, bridges and improve California’s growing network of mass transit, bicycle and pedestrian routes.

According to Transport Topics, the projects are supported by three programs created by the Road Repair and Accountability Act of 2017. The legislation—also known as Senate Bill 1 (SB 1)—raised the tax for diesel by 20 cents to 36 cents per gallon and for gasoline by 12 cents to 41.7 cents per gallon and thus far, has raised more than $108 million. These funds are slated to be used for ongoing maintenance and rehabilitation of California’s state highway system. 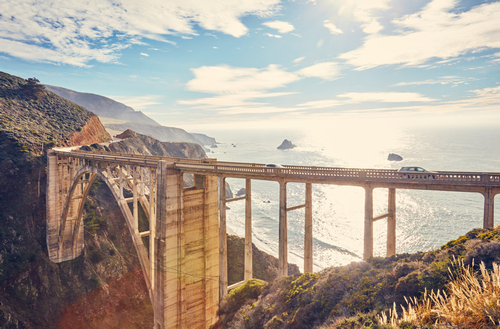 zorazhuang / Getty Images
Last week, the California Transportation Commission announced it had approved $2 billion for 56 new infrastructure projects that aim to address a variety of transportation needs throughout the state.

Approximately 60% of the approved funding represents projects located in Southern California, with the other 40% supporting projects in Northern California. The CTC reports that it has already received 130 applications requesting a total of $3.7 billion—almost twice the amount of funding that’s available.

Some projects already approved in the San Diego County region are as follows.

However, the $2 billion awarded for future projects are expected to provide funding through 2023 for improvements to the movement of goods, increased mobility options, access to public transit, and to support equity and environmental sustainability.

Caltrans reports that the SB 1 funds have enabled the Department to fix more than 6,400 lane miles of pavement, 635 bridges and 540,000 feet of culverts.

At the beginning of the year, United States Department of Transportation, Elaine L. Chao announced a Notice of Funding Opportunity totaling $906 million in grants through the Infrastructure for Rebuilding America (INFRA) discretionary grants program.

At the time of the announcement, the Department reported that it planned to award at least 25% of INFRA grant funding to rural projects involving highway and multimodal freight projects that have a national or regional economic significance. Another 10% of the funding was reserved for small projects, which if awarded, would receive at least $5 million. The rest of the available funding was slated to be split up between large projects, which were expected to receive a minimum of $25 million per awarded project.

Although the plan was ready to move forward for voting prior to the July 4 recess, Democrats hadn’t yet outlined how the bill will be paid for. House Speaker Pelosi (D-California) has pointed out though, that with the Federal Reserve approval to keep interest rates near zero, “there's never been a better time for us to go big.”

According to the FHWA, the Fixing America’s Surface Transportation Act established the NSFLTP Program to provide funding for the construction, reconstruction or rehabilitation of transportation projects providing access to or located on federal or tribal lands.

Under the program, the federal share of a project can be up to 90% and can be used to improve the condition of a critical transportation facility. Large-scale projects with estimated construction costs of $50 million or more are given priority consideration for selection, but the program accepts projects with estimated construction costs of at least $25 million.

Last month, the Senate Committee on Appropriations released all 12 of its fiscal year 2021 funding measures and subcommittee allocations earlier this month, highlighting $74.8 billion for the transportation, housing, urban development and other related industries.

In total, the DOT is slated to receive $25.7 billion in discretionary budget authority and $61.3 billion in obligation limitation. Bill highlights regarding the agencies can be viewed, here.

However, back in August, the American Road and Transportation Builders Association gathered and reviewed publicly available data on transportation revenue and construction programs from states and local governments, finding that at the time, $9.6 billion worth of projects had been delayed or canceled in wake of COVID-19.

As part of California’s transportation investment announcement, the state reports that it is still considering public works construction essential and work has stayed consistent during the pandemic. Partners, contractors and workers associated with Caltrans are following U.S. Center for Disease Control and California Department of Public Health guidelines.