Last month, the Pennsylvania Public Private Transportation Partnership (P3) Board approved what it’s calling the Major Bridge P3 Program, a new transportation initiative that will help accelerate the reconstruction and rehabilitation of major bridges in partnership with the private sector.

According to the Pennsylvania Department of Transportation, the program is a component of PennDOT’s forthcoming Pathways initiative, which aims to identify sustainable transportation funding options in response to a growing highway and bridge funding gap.

In regard to PennDOT’s projects in wake of the COVID-19 pandemic, the Department announced in March that it and the Pennsylvania Turnpike Commission would be ceasing work on all its projects at the time for a minimum of two weeks.

The pause in construction followed state Gov. Tom Wolf’s decision to extend the shutdown of all non-essential businesses to all of Pennsylvania’s 67 counties.

In addition to halting construction, the Department also closed all district offices, motorist licensing offices and welcome centers. However, the Turnpike and PennDOT continued to provide emergency repair maintenance as needed. 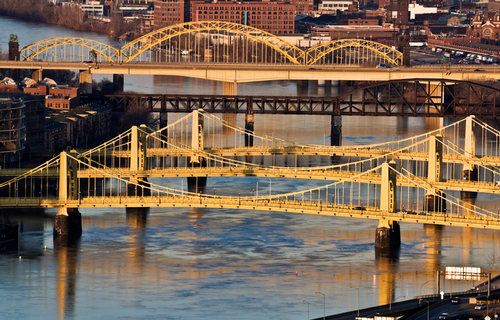 benkrut / Getty Images
Last month, the Pennsylvania Public Private Transportation Partnership (P3) Board approved what it’s calling the Major Bridge P3 Program, a new transportation initiative that will help accelerate the reconstruction and rehabilitation of major bridges in partnership with the private sector.

The following month, Wolf announced a three-phase gradual reopening plan of the state’s economy which included the reopening of construction, auto sales, and retail stores, provided they practice social distancing and follow other COVID-19 mitigation measures.

However, while the state’s economy reopened sometime in June, PennDOT officials began grappling with the issue of how the state would pay for projects. At a May state Senate hearing, Acting Secretary Yassmin Gramian said that a revenue loss of $900 million was projected, largely attributed to the pandemic causing Pennsylvanians to drive less.

The reduced driving throughout the state shutdown has drastically cut the gasoline tax revenue, which is what PennDOT primarily uses for projects that include maintenance.

Because of this, Gramian said that only 33 of 96 contracts that PennDOT had received bids for (worth $380 million) had funding. The rest were being reevaluated. She also said that the agency would shift maintenance projects from resurfacing to tar-and-chipping wherever possible.

In addition to PennDOT’s gas tax revenue, Turnpike CEO Mark Compton also said that the light traffic had resulted in a projected loss of $500 million in toll revenue, prompting the Turnpike to cut its capital budget for the fiscal year that began in June from $606 million to $459 million.

PennDOT reports that 74% of highway and bridge funding is generated through the gas taxes, but fuel consumption has been progressively decreasing.

Gramian added that PennDOT was projected to spend $2.2 billion in 2020 on roads and bridges, but that expectation was decreased to about $1.8 billion.

PennDOT spokesperson Alexis Campbell did confirm that road and bridges projects that were already underway would continue, however, in July, PennDOT announced that it had since withdrawn advertisements for bids on at least 19 projects.

Officials hesitated to speak on which big projects will be delayed at the time as they hoped to get money from a national infrastructure program, which could come with its own strings attached.

In August, the American Road and Transportation Builders Association found through a review of publicly available data on transportation revenue and construction programs from states and local governments that $9.6 billion worth of projects had been delayed or canceled.

Some key highlights from the data included:

Through the recently approved Major Bridge P3 Program, PennDOT will now be permitted to solicit proposals for the design, build, operation and maintenance of select bridges across the state under 20- to 30-year concession agreements.

These projects would include both individual and multi-bridge packages associated with roadwork, involving what the agency calls “structures of significance based on physical size, location, and cost to replace or rehabilitate.”

In terms of paying for these projects, the Department reports that electronic tolling would be implemented on the completed structures, with any excess revenue applied to other road and bridge projects.

The program also plans to aid PennDOT in achieving the following goals:

The initiative also aims to provide travelers, residents and businesses with high-quality transportation infrastructure by studying and implementing alternative funding solutions that could address near- and long-term highway and bridge needs.

While PennDOT has not identified specific bridges for P3 project delivery, it says it plans to apply the program in a geographically balanced manner statewide and plans to announce other changes to its transportation funding structure in the coming weeks.