Following the announcement of Joe Biden as the United States’ President-elect, the Biden-Harris transition team has since released its plan regarding climate change, highlighting the incoming administration’s early priorities.

“From coastal towns to rural farms to urban centers, climate change poses an existential threat—not just to our environment, but to our health, our communities, our national security, and our economic well-being,” the transition document stated.

“It also damages our communities with storms that wreak havoc on our towns and cities and our homes and schools. It puts our national security at risk by leading to regional instability that will require U.S military-supported relief activities and could make areas more vulnerable to terrorist activities.”

While the Biden-Harris announcement comes as a means to create more ambitious climate policies and new jobs, the industry has been working to fight these issues on their own terms as well.

The announcement arrived eight years after Hurricane Sandy battered the area’s coastal communities and plans to build six miles of storm surge flood protection along the Queens waterfront. Additionally, the project will also see the reinforcement of a network of dunes and the building out and restoration of nearly 20 stone groin structures—similar to rock jetties—into the ocean to prevent additional sand erosion.

Plans for the barrier have reportedly been in the works since Hurricane Ike rocked Galveston, Texas, in 2008, and are expected to cost anywhere between $23 billion to $32 billion, however, is expected to save the state $2.28 billion annually in storm-associated recovery costs, noting that Hurricane Ike caused $38 billion dollars in damages alone. 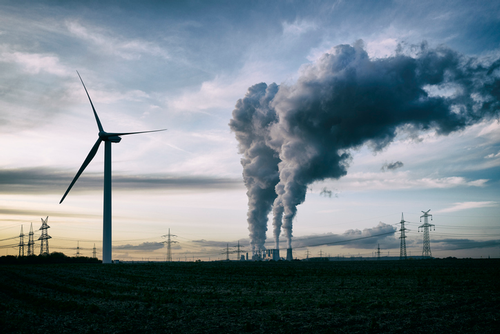 acilo / Getty Images
Following the announcement of Joe Biden as the United States’ new President-elect, the Biden-Harris transition team has since released its plan regarding climate change, highlighting the incoming administration’s early priorities.

Also in October, Venice reported that for the first time in decades, flood barriers known as Mose (Italian for Moses), successfully kept the city dry during its first day of acqua alta or “high waters”—seasonal flooding caused by high tides.

Made up of 78 submerged gates positioned at the three mouths of the lagoon, the food barrier system was designed with the capabilities to be raised during acqua alta in order to protect the lagoon against high tides ranging from 110 centimeters to three meters. According to reports, these gates are split into four barriers, which include multiple gates to admit vessels through.

On the research and development side of things for flood barriers, back in April, researchers from Princeton University published new designs for protective infrastructure to combat storm surges along the nation's coastlines in the Journal of Structural Engineering.

Designed as oversized duel-purpose kinetic concrete umbrellas, the canopy-like structures serve as protection from sunlight by day, however, in the event of storm, can be transformed into a barrier to protect communities against heightened waves and incoming tides.

The new approach arrives as costal communities are beginning to construct more seawalls in order to protect its people and properties from extreme flooding caused by stronger storms and higher sea levels.

However, its not just climate issues associated with the coast that are being combatted, others are taking their efforts to power plants.

It should be noted this month Black & Veatch recently announced it would ceasing participation in any further coal-based power design and construction in an effort to aid the global power industry’s transition to lower carbon emissions, and in some cases zero-carbon energy goals.

Regarding its recent decision, Black & Veatch reports that it will still continue to fulfill its current project commitments, which are slated to reach completion in the coming months, but also plans to support its clients through their own transitions and decarbonization and sustainability goals to a balanced energy portfolio with cleaner energy sources.

Another form of battling the climate crisis over the years has been involved in the research, development and design of carbon capturing infrastructure.

In addition to the technological aspects of the towers, the external design of the systems also incorporates green planters which will cover 60-70% of the surface to help produce clean oxygen.

The same year, researchers from Stony Brook University confirmed their development of a new form of concrete that could help alleviate rising pollution levels. Sulfur dioxide, a major contributor to air pollution, can be removed from the air by concrete surfaces. Alex Orlov and associate researchers learned that concrete eliminates sulfur and nitrogen oxides.

The development of smog-eating concrete was revisited again by engineers at Graphene Flagship in 2019, when they combined graphene and titanium dioxide nanoparticles to create a new photocatalyst that was reported to successfully remove pollutants from the air. The research was published in Nanoscale.

In an attempt to find new ways to remove more pollutants from the atmosphere, a research team at Graphene Flagship looked at titania in its photocatalytic coatings. (Titania is a common photocatalyst because when it’s exposed to sunlight, it degrades nitrogen oxides (NOx) and volatile organic compounds present at the surface, oxidizing them into inert or harmless products.) The work was coordinated by Italcementi, HeidelbergCement Group (Italy).

From the research, Graphene Flagship found that by performing a liquid-phase exfoliation of graphite in the presence of titania nanoparticles, a graphene-titania composite was created and when tested, degraded up to 70% more atmospheric nitrogen oxides than standard titania nanoparticles.

And in 2018, a 328-foot-tall tower was built in Xian, in the Shaanxi province in China, to improve air quality. Researchers from the Institute of Earth Environment at the Chinese Academy of Sciences were reportedly overseeing the tower’s operation.

To function, polluted air is sucked through a greenhouse that’s roughly half the size of a soccer field at the tower’s base. Solar energy then heats the air, which rises and passes through multiple cleaning filters.

In tying in with some previously mentioned efforts to fight climate change, the Biden-Harris transition team is looking at one form of technology it believes will be welcomed by a normally divided Congress: carbon capture and storage (CCS).

While the technology isn’t specifically outlined in the transition document, CCS and other forms of negative emission technology has been long promoted by Biden throughout his time as presidential candidate and is noted in his campaign climate plan.

According to MIT Technology Review, the tech involves a number of approaches, including methods of drawing greenhouses gases from the atmosphere, like witnessed in carbon-sucking machines, as well as speeding up the process of carbon capturing minerals and the absorption of carbon into plants, which could then be converted into fuel sources and capture any resulting emissions.

Overall, Biden intends to dedicate $1.7 trillion to overhaul energy, transportation, agriculture, and other sectors. According to the transition document, the team will go beyond just recommitting the nation to the Paris Agreement on climate change, and aims to build a more resilient, sustainable economy through the creation of union jobs within these new investments.

“I know that climate change is the challenge that’s going to define our American future—and I know meeting this challenge will be a once-in-a-century opportunity to jolt new life into our economy, strengthen our global leadership, and protect our planet for future generations,” said Biden in a statement.