Researchers have reportedly developed an eco-friendly smart coating that’s designed for sub-ambient, radiative cooling in buildings as a way to combat active coolants.

According to The Hong Kong Polytechnic University, a team of researchers from China and the United States recently presented their low-cost smart coating in a study published in Advanced Materials, pointing to how “passive” cooling has caught the attention from both the scientific and tech communities alike.

The researchers noted that passive cooling options have faced challenges in the past such as the expensive or unsustainable design and fabrication of existing passive cooling platforms, limiting any large-scale and widespread application.

In addition, the typical imbalance in cooling ability of these coatings during the day versus the night usually leads to drastic day-night temperature differences, which is also problematic. 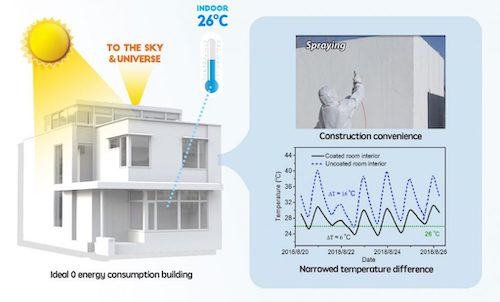 “The solution therefore requires a ‘smart’ cooling mechanism that can both enhance daytime cooling and minimize nighttime heat loss,” according to the University.

“To do this, the researchers created a new smart coating that is comprised of conventional building materials, including titanium dioxide nanoparticles, fluorescent microparticles and glass microspheres that were engineered to reflect most of the sunlight hitting the building, minimizing its heat absorption while simultaneously re-emitting infrared radiation.”

The titanium dioxide particles reflect sunlight through light scattering while the fluorescent particles further increase the amount of reflected light by converting the absorbed sunlight to fluorescence emissions, which are dissipated away from the building.

Meanwhile, the glass microspheres re-emit mid-infrared broadband radiation, allowing not only heat dissipation, but also allowing heat exchange to take place between the building and the sky. The former enables the coating’s sub-ambient cooling ability while the latter makes use of the sky as a temperature regulator to narrow its day-night temperature difference, leading to smart sub-ambient radiative cooling.

As part of the research, the coating was tested on the surface of a model concrete building. Through this heat exchange with the sky, daytime cooling was enhanced while nighttime cooling was suppressed.

According to the data, the building’s internal temperature was maintained at around 26 degrees Celsius, even when the outside temperature varied from 24 C to 37 C during the day.

Researchers also completed an artificially accelerated weathering test, which was the equivalent of exposing the coating to the outside elements for two years, which showed that the cooling performance degraded “negligibly” within that timeframe.

“Let us hope this new coating makes it to commercialization soon, enabling a sustainable, passive cooling technology that could help to fight climate change and the global energy crisis.”

This time last year, researchers at Columbia Engineering, out of Columbia University in New York City, announced that they had developed porous polymer coatings that they say enable “inexpensive and scalable ways to control light and heat in buildings.”

Those researchers took advantage of the optical “switchability” of PPCs in solar wavelengths to regulate solar heating and daylighting, and then extended the concept to thermal infrared wavelengths to modulate heat radiated by objects.

The team at the time said that its design is similar to smart windows, but unlike previous fluoropolymer coatings, which are static, these designs can switch between heating and cooling modes, making them more useful for places like New York, which sees a wide range of temperatures.