Last week during the Grenfell Fire Inquiry, emails from the cladding companies involved in the tower’s 2015 refurbishment revealed that officials at the companies knew that their materials would burn easily in a fire.

The Guardian reported that emails from Arconic, Celotex and Kingspan were showed to the inquiry and that Adrian Williamson QC and Sam Stein QC, representing the bereaved and survivors, accused the firms and regulators operated in a “toxic and incestuous culture.”

According to the inquiry reports, one email from a senior executive at Arconic (which made the polyrethylene core cladding panels) showed the official telling colleagues that the shortfall in the product’s fire performance was “something that we have to keep as very confidential.”

An internal presentation from Celotex (manufacturer of the foam insulation) revealed that the company decided to market the product as combustible partly because “nobody understood the test requirements.”

All three companies deny wrongdoing, however, the inquiry turned its attention to documents in part because four Arconic employees refused to give verbal evidence.

France-based Claude Wehrle, Claude Schmidt and Gwenaëlle Derrendinger—as well as Germany-based Peter Froehlich—worked at manufacturer and were involved in selling Reynobond panels with a combustible polyethylene core for use on the Grenfell Tower. 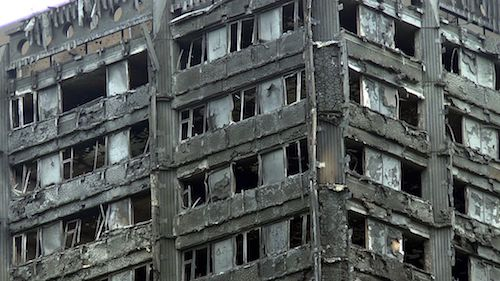 ChiralJon, CC-SA-BY 2.0, via Wikimedia Commons
Last week during the Grenfell Fire Inquiry, emails from the cladding companies involved in the tower’s 2015 refurbishment revealed that officials at the companies knew that their materials would burn easily in a fire.

The employees refused to give evidence claiming they would open themselves up to prosecution under the “French blocking statute,” which is a French law that restricts people from sharing commercial or technical information to establish evidence in foreign courts.

However, counsel to the inquiry Richard Millet suggested that reason had little ground to stand on.

“Neither Arconic nor any of those witnesses has provided any evidence that there is a real risk of prosecution under the French blocking statute if they did attend to give oral evidence to the inquiry,’ he told the inquiry yesterday (Nov. 5),” Millet said. “On the contrary, there are very sound reasons for thinking that the risk of their prosecution by the French prosecutor is very low indeed.

“Not only has there been, to our knowledge, only one successful prosecution under the French blocking statute in the 51 years since that statute was enacted, but it is hard to think that the French prosecutor would wish to punish individuals for giving evidence before a public inquiry in an erstwhile EU member state looking into a notorious fire in which so many were killed.”

Early last month, officials heard that restructure at the borough council led to an unbalanced workload. Days before, John Hoban, the building control officer for Grenfell Tower, told the inquiry that the cuts to the team meant he was working on up to 130 jobs at once and that he was unable to do his job properly.

And, most recently, an expert witness called the lead architect on the tower refurbishment “imprudent” for not employing a fire consultant specialist when designing the cladding system for the 24-story structure.