As part of the United Kingdom’s High Speed 2 (HS2) project­—a new high speed railway to connect London, the Midlands, the North and Scotland—project crews have reportedly installed the second of four bridges at its new Interchange Station in 45 minutes.

Installed over the A446 in Solihull, England, the modular bridge measures 45 meters long (roughly 148 feet) and weighs 914 tons.

Created to meet the U.K.’s low-carbon transport future, the project also aims to further connect rail capacity across the country and rebalance the country’s economy. Once completed, the rail line is slated to serve over 25 stations, including eight of Britain’s 10 largest cities and connecting around 30 million people.

The construction of the new railway is split into three phases. 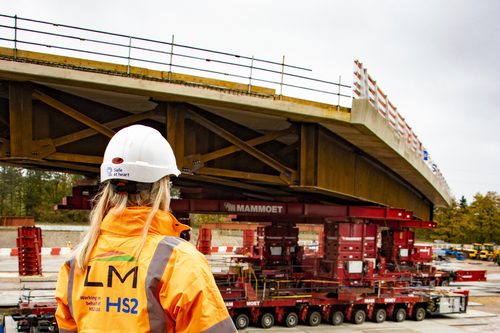 HS2
As part of the United Kingdom’s High Speed 2 (HS2) project­—a new high speed railway to connect London, the Midlands, the North and Scotland—project crews have reportedly installed the second of four bridges at its new Interchange Station in 45 minutes.

Over the course of Phase One, rails plan to link London and the West Midlands through 140 miles of dedicated track. According to HS2, the rail will pass through more than 32 miles of tunnels and over 10 miles of viaducts. This portion of the project is estimated to cost between 35 billion and 45 billion pounds (between $45 billion and $58 billion) and hopes to open between 2029 and 2033.

During Phase Two (A), a line will be installed between Fradley in the West Midlands and Crewe in Cheshire, from which it’ll  connect with existing high speed services to carry passengers between London and Crewe.

HS2 adds that the government is currently drawing-up an integrated rail plan for the North and Midlands, to identify the most effective sequencing of relevant investments and how to integrate HS2, Northern Powerhouse Rail and other rail investments. This plan will be informed by an assessment of the rail needs of the Midlands and the north undertaken by the National Infrastructure Commission.

In September, Prime Minister Boris Johnson visited the Midlands site to mark the official start of construction for the HS2 project, and a further two bridges are nearing completion. Over 200 people are involved in this construction site, contributing to supporting jobs in the region.

According to reports about the construction milestone, the installed bridge was designed in a virtual world using a Design for Manufacture and Assembly (DfMA) strategy. After designs were approved, Durham-based Cleveland Bridge manufactured the infrastructure and supplied 220 tons of steel girders for the project. Offsite manufacturing company and specialist engineering contractor Expanded (Nottinghamshire, England) was also reported to have supplied 80 precast concrete modular abutment blocks.

“That’s great news for clients, stakeholders and local communities alike. This is the future of bridge design and delivery.”

When it was time to move the structure into place, O’Rourke and J. Murphy & Sons Joint Venture led the installation. The high-tech portion of the installation process involving various engineering and environmental services was supported by design joint venture WSP and Ramboll.

Using a 128-wheel hydraulic platform to move the bridge span, the infrastructure was moved 150 meters and lowered onto the DfMA abutment shells in all of 45 minutes. According to HS2’s delivery director David Bennett, the endeavor allowed for the bridge to reopen 24 hours ahead of schedule, adding that the M42 bridge installed in August, was also completed ahead of schedule.

“Our successful partnership approach has led to the design and construction of HS2’s first permanent bridges including one over the M42, the A452 bridge over the A446, as well as two other bridges over what will be the main HS2 railway line adjacent to the new HS2 Interchange Station,” said Jon England, design joint venture Project Director.

“We are proud that through collaboration with LM JV, Highways England and local authorities, the application of 3D modelling techniques to align highways, earthworks, structures and utilities with the existing infrastructure and the innovative use of offsite manufacturing and Design for Manufacturing and Assembly techniques, we were able to safely deliver on this ground-breaking project.”